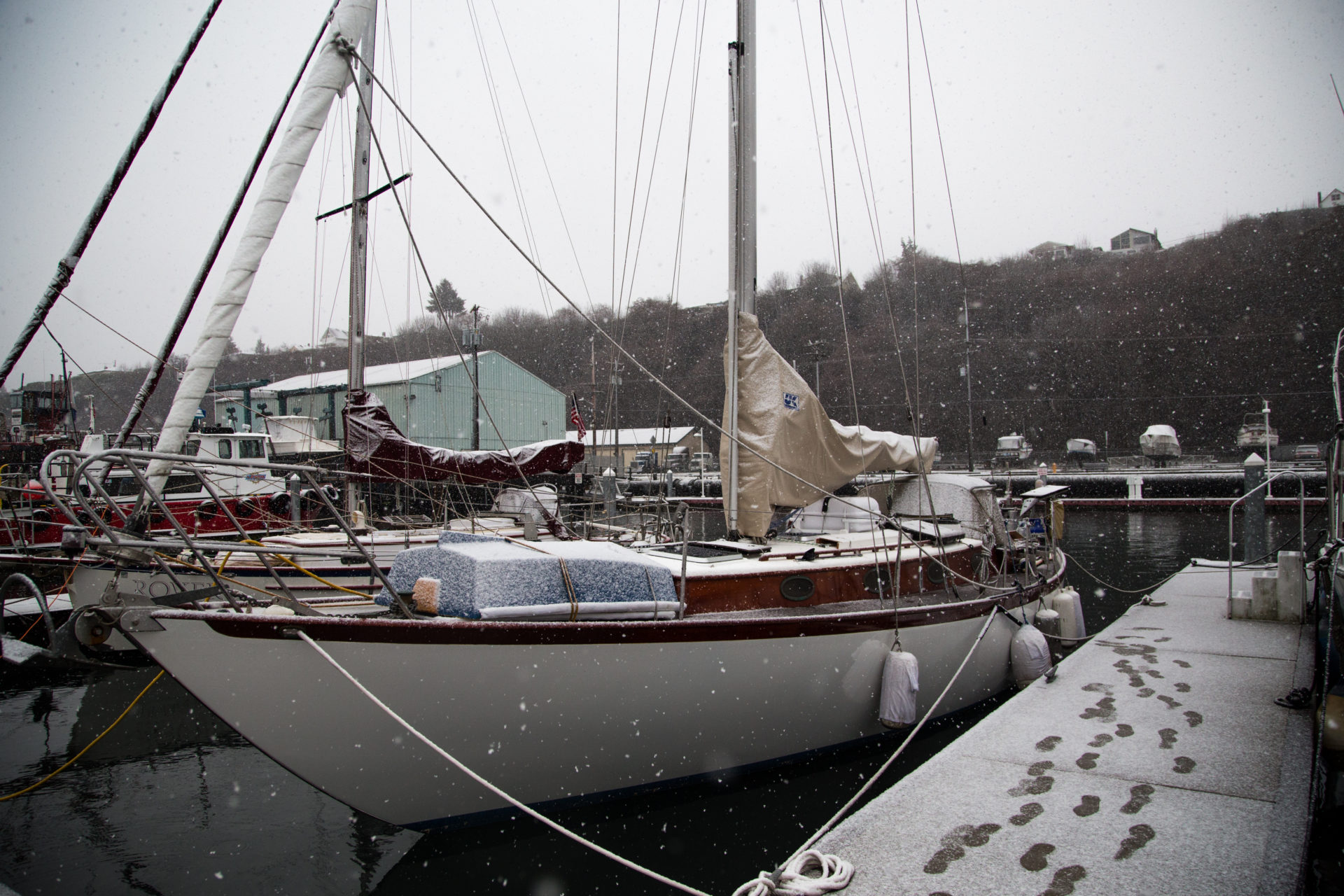 In summer, or in the tropics, life aboard a sailboat can be idyllic. You might eat dinner in the cockpit, jump overboard for a swim, or do a little yoga on the foredeck if that’s your thing. Going ashore means slipping on a pair of flip-flops and hopping in the dinghy. At night the hatches stay open for some stargazing and a cool breeze.

In cold weather—especially winter around here—all that changes. No more swims, no more outdoor dinners, no more flip-flops. You close your hatches and start the heater. The snow falls; ice sticks to your decks. It’s a bit chilly for that on-deck yoga. Essentially, everything becomes more difficult.

While living aboard our 40-foot cold-molded wood cutter Celeste through an unusually severe winter in the Pacific Northwest, my husband Seth and I had a lot of time to think about how best to deal with winter liveaboard woes and came up with these 12 tips. So here they are, hopefully to the benefit of fellow sailors not fortunate enough to be cruising somewhere sun-drenched all winter.

In hot weather, sailors and liveaboards spend most of their time outdoors, on deck. In freezing conditions, this isn’t pleasant, so you retreat to the heated cabin. Because the deck and cockpit are unusable, your living space shrinks by half. And since you’re living aboard, you probably have all the stuff you need for your life stowed in the cabin: winter clothes, summer clothes, kitchen stuff, staple foods, bedding, toiletries, books and computer. Not to mention all the stuff you need for cruising—extra sails, yacht hardware, tools, spare parts, charts, first aid kits, survival and emergency gear—and possibly some toys as well—scuba gear, cameras, musical instruments, maybe surfboards. No matter how neatly it’s stowed, it feels cluttered and cramped.

Furthermore, unless you have a powerboat or a big catamaran, it’s dark. Remember all the sunlight you got through those open hatches? Well, when they’re closed, especially the main companionway hatch, your natural light sources are reduced to your cabinside portholes and the overhead hatches. And this is winter, with fewer daylight hours and a lower angle of the sun. You don’t have to have seasonal affective disorder to feel glum in these conditions.

These were our five main solutions to this problem:

1. Thin out the clutter. Seth and I sold stuff on Craigslist and we gave stuff away. A friend of ours who has lived on his sailboat for several years deals with this by renting a storage unit and only keeping on board the stuff he needs for that particular season. Because we planned to winter in a different place the following year, this didn’t make sense for us, but it seems a good idea for liveaboards who stay put in one area.

2. Take your boat out. This doesn’t have to be extended cruising—although, if you can manage that, great. Simply a few hours’ sail or a motor over to a nearby dock for lunch does the trick. It’s hard to motivate when there’s snow on the marina pontoons, but getting out and feeling the boat as it moves through the water really lifted my spirits. It made me remember why we live on a boat in the first place and it got us out on deck, moving around outside. An added bonus is that doing this even just once a fortnight means you have to tidy the boat into sailing shape, which cuts down on the clutter and cramped feeling.

3. Get off the boat everyday. If you have a job to go to obviously that solves this issue. Both Seth and I work for ourselves, so it’s too easy for us just to open up our laptops and go to work in the boat’s dinette. After days of that, though, irritability spikes. So instead, we went to work at the public library.

4. Exercise. One of the biggest remedies: Get exercise. Before the trails got icy, Seth and I went hiking in the Olympic National Park as much as we could—our biggest hike was a full day excursion in which we gained (and lost) 6,000 vertical feet. When snow, ice and darkness descended in December and January, we bemoaned not having our ski-touring gear cluttering up the boat, but joining a gym was a decent alternative. There’s nothing like endorphins to make the winter blues disappear.

5. Socialize. A sense of community and activities with friends that bring you out of yourself and off the boat make a big difference. We made friends with fellow liveaboards, visited friends we already had in the area and went to local events. I also tried to combine exercise with socializing by joining yoga and barre/Pilates classes.

Cold is the obvious woe that a winter liveaboard has to fight, but happily there are many ways to heat a boat. Dampness is harder to battle. When it’s colder outside than in, condensation forms on the ports, hatches, and eventually the hull. This gets worse when you have poor ventilation and when you have people breathing and cooking and washing in the cabin. Condensation is clammy and unpleasant in and of itself, but it gets worse when it (inevitably) causes mold, mildew and smell. So we wanted to avoid this at all costs.

Heating the cabin not only makes it actually livable, but dries the air, which is a beachhead in the war against dampness. Here are some heating options—we use all three in different situations—with pros and cons:

6. Electric Space Heaters. These put out a good amount of heat for a small space like a boat cabin. Most of them also have fans, which circulate air, helping with the ventilation problem. The cons: They take a lot of electricity, so your shore-power bill might be pretty high, depending on your marina’s rates. If you’re at anchor or on a mooring, this is (obviously) not practical.

7. Diesel forced-air heaters. Unlike electric heat, in which coal or hydro or nuclear power has been converted into electricity and then re-converted into heat, these convert diesel fuel directly into heat and are therefore more efficient. They also have a fan, which circulates air. This fan does use a fair amount of your DC power, however, so you’ll either have to have a decent generator or be plugged into shore-power.

8. Stove-type heaters. Using no electricity at all, these are potentially the cheapest way to heat your boat. Most use diesel, though some use kerosene (cleaner) and others use wood or coal (possibly cheaper). Unfortunately these do not circulate air, so you’ll have to find another way to keep air moving periodically so that the cabin doesn’t get too stuffy.

These are more difficult problems. As well as keeping the cabin temperature at a point where we don’t have to wear hats and jackets indoors, here are some of our tactics:

9. Keep things away from the hull. This lets any moisture that does develop evaporate instead of soaking into sails, clothes, charts or whatever it is that you might have crammed right up against the hull. We really didn’t want soft items getting wet because they are the first to mildew and cause that boat funk that’s so hard to eradicate. In the case of cushions, building a slatted ceiling that keeps them off the hull and allows air to get through makes an enormous difference.

10. Don’t shower on board. Even if you have a hot shower on your boat, it makes a difference to use the marina’s showers instead. None of us enjoy public showers, particularly when you have to walk through the cold and dark to get to them, but disciplining yourself to use them drastically reduces the level of humidity on the boat and consequently the condensation and mildew. Boiling water for cooking and coffee is unavoidable—especially for coffee—but showering off the boat helps a lot to cut down on damp.

11. Keep the bilge dry. This has more to do with smell than mildew or an actual feeling of damp, but that smell of stagnant water can be pretty unpleasant, especially when all the hatches are closed and ventilation is poor. We’re lucky in that we have a shallow bilge, so it’s relatively easy to keep it dry: after the pump gets as much as it can, we sponge out the rest.

12. Use an active dehumidifier. This, of course, presumes that you’re on shore-power, but if you are, then this works wonders. We have a big General Electric machine that has run continuously through three winters now, and it really gets the credit for keeping Celeste funk-free and mold-free. We keep the humidity level at 50 to 55 percent, even when it’s 100 percent (raining) outside. When we’re away for a period of time (days or weeks), it drains into our galley sink. When we’re on board, we empty its two-gallon bucket about every 24 hours.

It’s hard to avoid the winter woe of wishing for summer and the sailing season, but hopefully staying active and keeping your floating home dry will make a winter aboard a pleasure of its own. Then, of course, there’s always the option of heading south—Mexico, anyone?