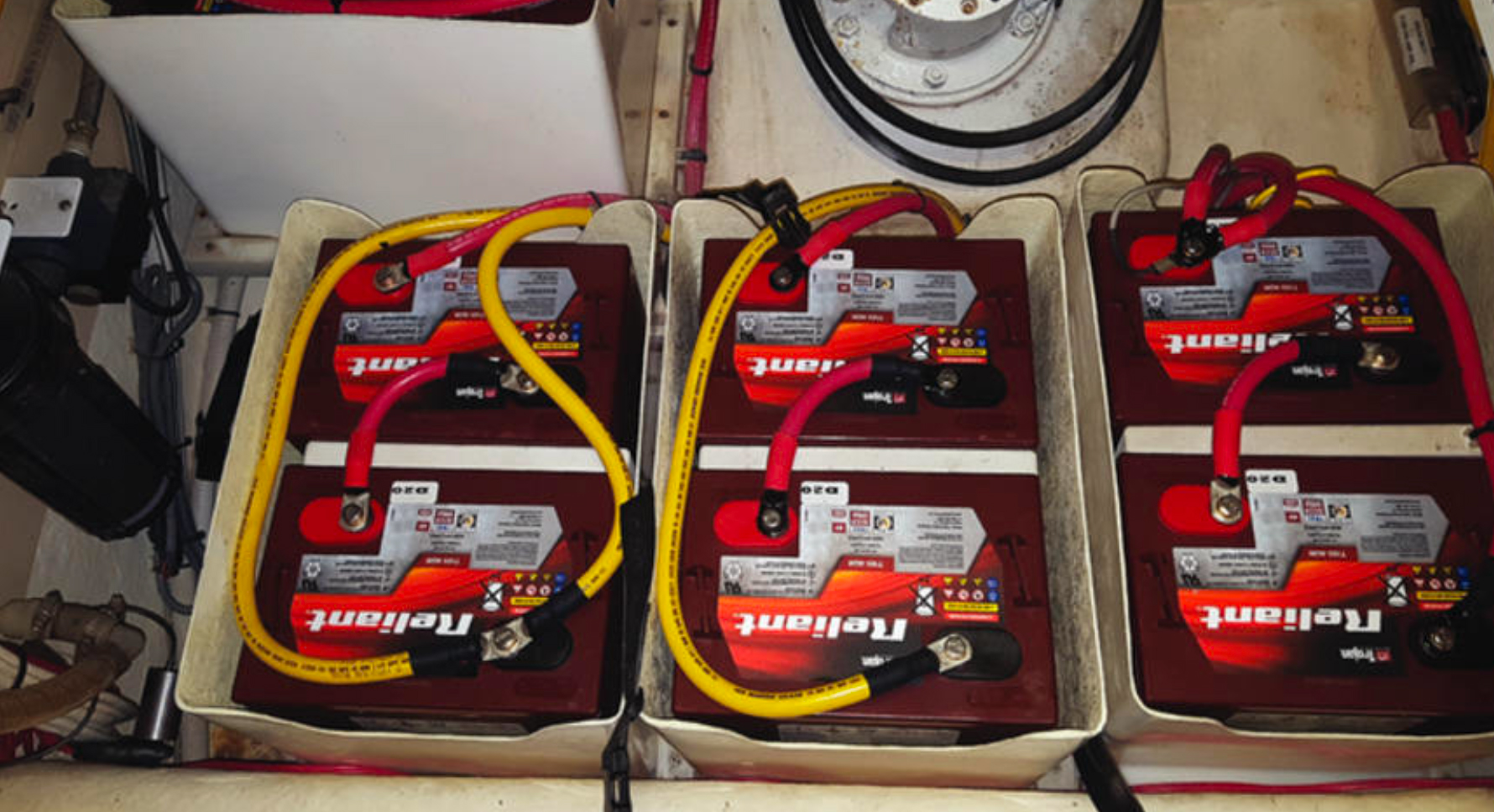 A Lesson in Polarity

It's a good idea to check, and double-check, your batteries' polarity before you connect to them

We have owned our 2006 Nordic Tug 54 for about four years now and the house batteries were in need of service. I have been installing batteries of all sizes and types as part of my work for the last 30 years, so I am no stranger to how batteries are to be installed and strung for correct voltage and capacity. The existing eight six-volt Lifeline AGM batteries were strung in a series/parallel network giving a “usable” capacity of 220 amps at 24 volts. I chose to replace them with their close cousin the Trojan T105-AGM. I will admit the difference in the construction between the Lifeline battery and the Trojan was noticeable right away with lead threaded terminals on the Trojan and a brass threaded terminal on the Lifeline. This might explain why the Lifeline battery is one of the only military spec batteries available, however I am not planning to go to war with my boat so the Trojan will do just fine; but I digress.

I chose to replace half the string at a time so I did not have too many cables loose at one time, minimizing the chance of making a mistake when connecting the batteries. When half of the 24-volt string was installed I made the final connection to the remaining four and I got a small spark! That should not have happened. I figured the spark was due to a difference in potential between the old batteries and the new, so I decided to leave the parallel connection undone until I had the strength to get the rest of the batteries up and down the stairs to the utility room. Once the remaining batteries were changed, I again made the final connection bringing the two 24-volt strings into parallel. Again, a small spark… At the very same time my neighbour was manoeuvring his boat out of his slip. If any of you have been below the waterline when a boat close to you is manoeuvring, you know what I mean when I say it is incredibly noisy and you hear every jog of the thruster. What does this have to do with the batteries you ask? Well, when I made the final connection and got a small spark, l could also hear a small fan running. Again, I was confused because the house bank 400-amp fuse was removed so the battery bank could not be connected to anything. I decided to wait until my neighbour was gone so I could hear and tried again. Sure enough, a small spark and I could hear something that sounded like a fan when holding the lug of the cable against the terminal. Then my nose caught a whiff of that rotten egg smell when batteries are being charged! Nah, there was no way I could be smelling hydrogen sulfide gas from AGM batteries; after all, they are sealed with pressure vents that open when the battery builds pressure due to rapid discharging and overcharging. Uh oh! Time to disconnect the cable and check everything over. All was good with the cabling. I then measured the voltage of each battery and wouldn’t you know it; one of the batteries had reverse polarity! I thought, “there’s no way that can happen,” but I was looking right at it.

Thirty years ago, when I was learning my trade, my boss always metred a battery for proper polarity. He told me, in not such a polite way: “I have no idea if the guy in the factory is colour blind or not!” He would rather take the time to metre the batteries before the final connection was made to a very expensive fire alarm system! At the time l thought he was nuts, now… not so much.

The bad battery likely had very little charge so the spark that I was getting was not that big. Had it been a healthy battery the arc would have blown the terminal off the battery splattering molten lead and copper all over; including onto my face. Had I made the connection and not questioned the noise mixed in with my neighbour’s thruster wash; it is conceivable the battery could have caught fire and burned the boat to the waterline!

What I learned, or rather re-learned, is something I was taught 30 years ago and dismissed: Don’t let a battery made on a Friday before a long weekend spoil your day. Metre every connection as you go and assume nothing. Don’t believe your eyes. Red is not always red and “+” is not always positive.