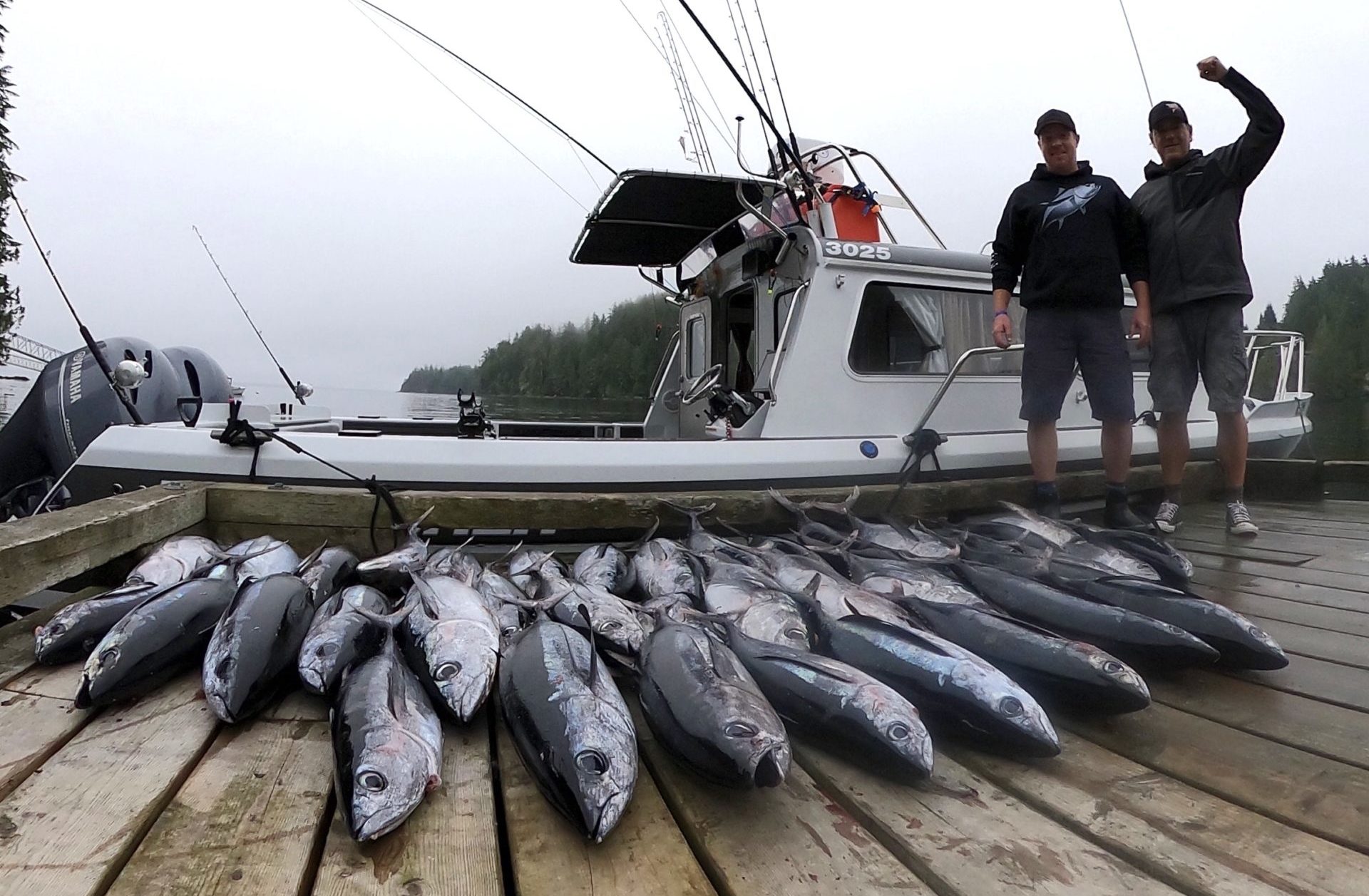 Matt Harmeson looks at the coolers, totes and wheelbarrows stuffed with albacore tuna outside the Mills Landing outpost in Bamfield, BC, shakes his head and chuckles.

The 2020 tuna season on the West Coast of Vancouver Island has been exceptional, and as co-organizer at the Bamfi eld Tuna Shootout, Harmeson is slammed. It’s a busy job, as upwards of 20 boats return to the docks stuffed with albacore and the pelagic frenzy that is the Bamfield Tuna Shootout rolls on. He and Mills Landing’s Jerry Gassner can barely keep up.

“The first half of the derby was slower than normal,” Harmeson says. “Then boats went north. Tuna were on the line all day and we could barely eat lunch.”

From September 11 to 18, this tiny enclave on the southwestern tip of Barkley Sound celebrated the 10th anniversary of the Bamfield Tuna Shootout, Canada’s first and oldest tuna derby, in typical Bamfield low-key style.

“We started out as a handful of boats that were interested in tuna fishing,” recalls Harmeson, a Bamfield and Barkley Sound guide by trade. “We decided to try it in 2010 and that first year we got tuna. And everyone that fished in 2010 is still tuna fishing 10 years later.”

Now to understand albacore fishing is a true lesson in frontiers. Pacific albacore tuna are a highly migratory species that follow bait and warm water masses, typically in excess of 15°C. Each August, those warm waters push toward Vancouver Island and anglers from Bamfield to Tofino to Winter Harbour launch in hope of finding these prized fish. 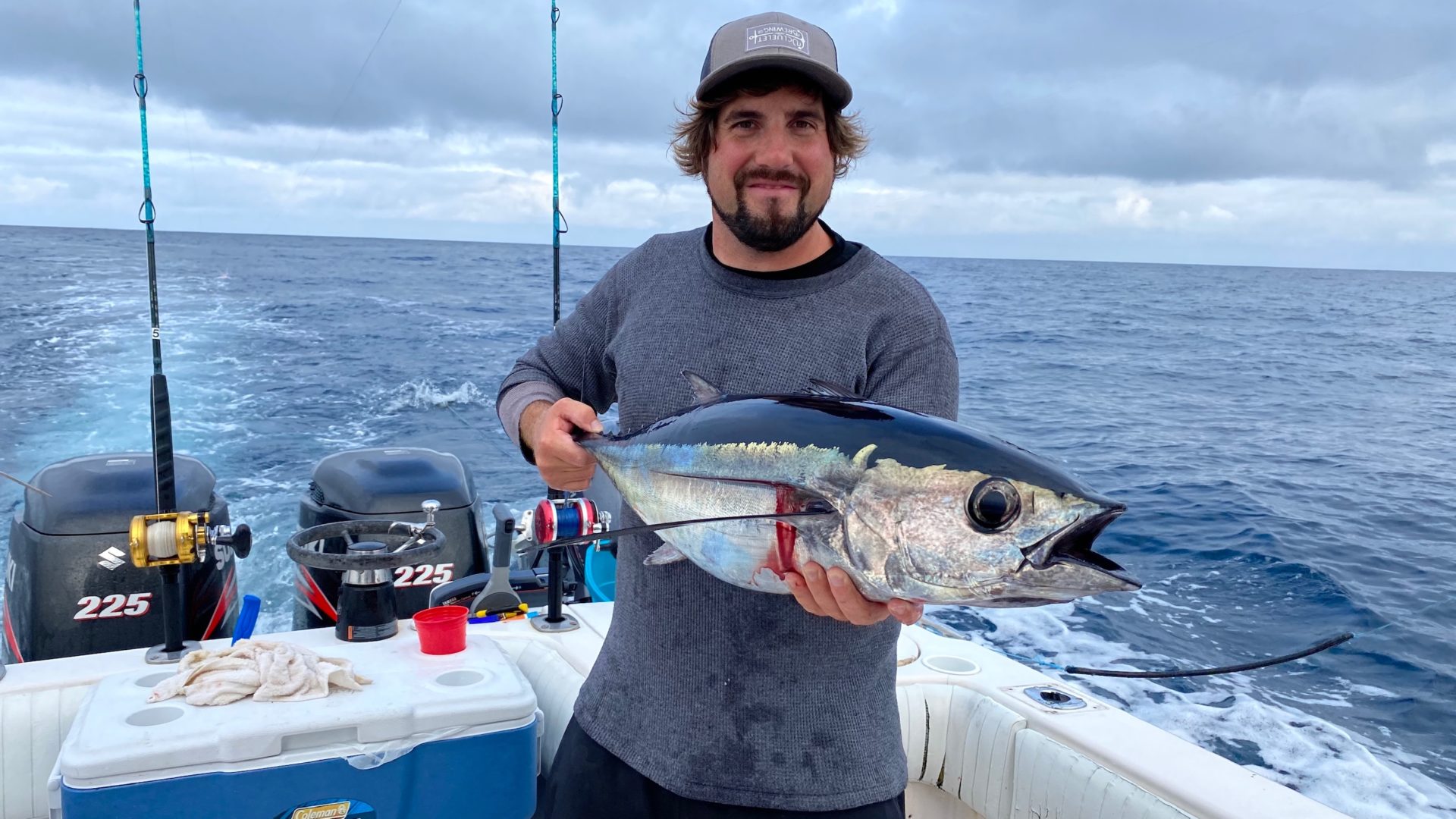 The disclaimer here is West Coast tuna fishing is not for the faint of heart or queasy stomach. Captains aim their boats west for blue water, running anywhere from 35 to 120 miles offshore.  Anglers troll six to eight rods up to seven knots, dragging a spread of surface zukers and plugs that resemble trolling gear from southern climates. There is no visible land and safety comes in preparation and numbers, with boats communicating by VHF and working in groups.

“The best thing about the tuna derby is the camaraderie,” Harmeson says. “We all have thousands of dollars invested in the week-long event and always share information on where and when tuna are being caught. I enjoy the relationships and the positivity the derby brings.”

The Bamfield Tuna Shootout has always run Saturday to Saturday, allowing for down time due to rough and windy weather. Each boat weighs in its top four fish over eight days and top aggregate weight wins the derby. Simple.

Well, simple if you don’t mind travelling in dark, offshore overnighters and a trip to what often seems like the edge of the world.

“It is continuing to grow and more people are giving it a shot every year,” adds Harmeson. “I think that most of us core guys will still be in Bamfield fishing the 20-year anniversary.”

For the record book, Nanaimo resident Danny Bishop and his boat Bish and Son took the 10th anniversary title and $7,500 cash with an aggregate weight of 90.75 pounds.