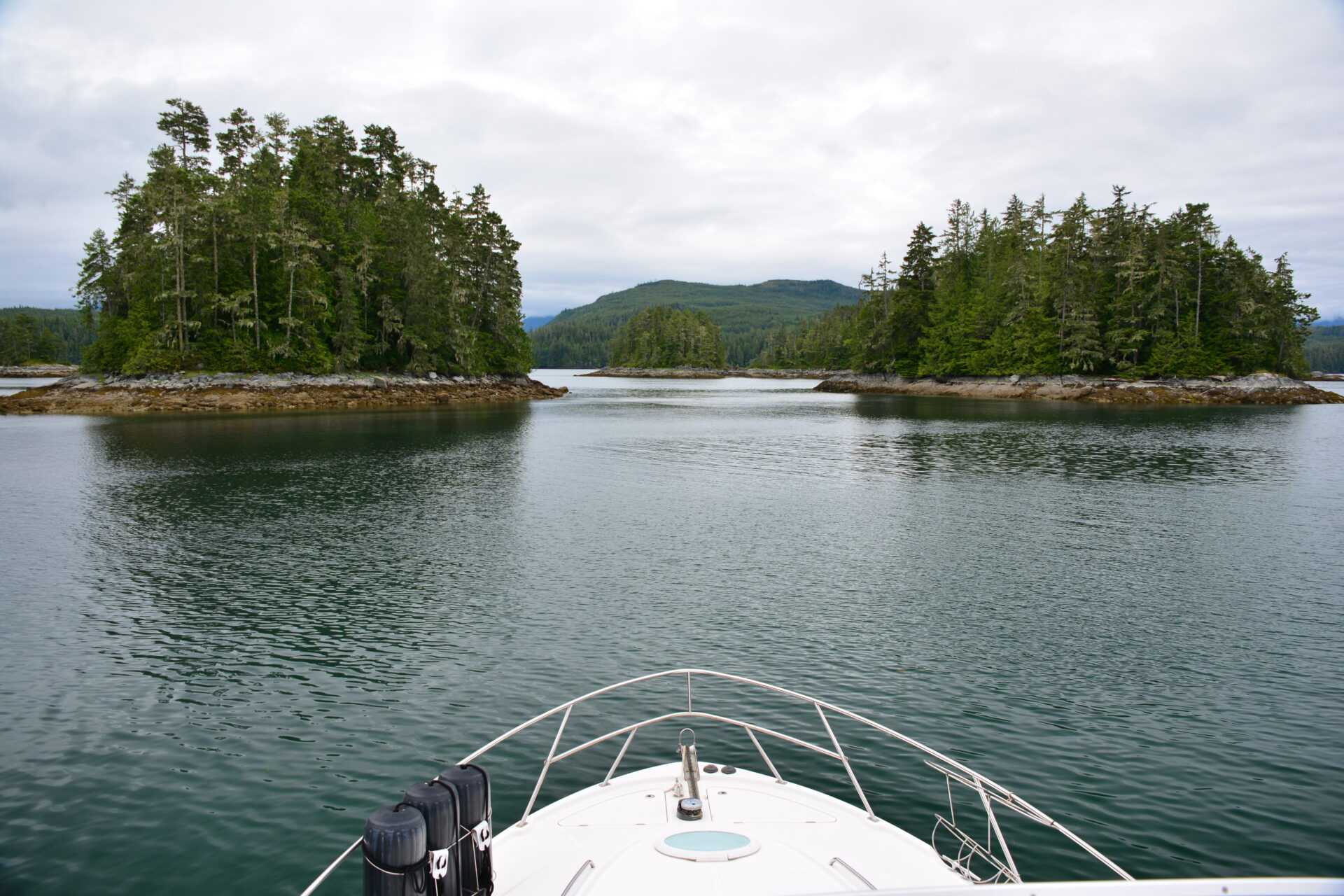 A touch of history, culture and wildlife

Cautiously, we guided Easy Goin’ southeast through Clio Channel, past the abandoned First Nation settlement of Kalugwis (Karlukwees), then northwest in Beware Passage. The latter appropriately named, as it is peppered with rocks, unnamed islets and currents of three to four knots during the spring. The flood current flows east. Skippers need to move slowly and pay attention to the chart plotter and depth sounder. During the summer, the location of most rocks can be identified by the presence of bull kelp. Our destination was Beware Cove, Turnour Island, about halfway up the Passage.

Beware Cove can be entered via either side of Cook Island; we opted for the unobstructed entrance west of the island, passing between the Cook and Turnour islands. In the late 1890s the Powell River Company owned the timber rights on Turnour Island and had four logging camps on the island’s shoreline. Camp three was located northwest of Cook Island, on the northwest shore of Beware Cove.

Upon our arrival, we discovered the cove was full of crab traps and the head of the cove shoals quickly into a drying flat, but we found a spot to anchor north of the two unnamed islets in about five metres of water over mud and shell bottom. The holding was good and the location provided protection from any southerlies and decent protection from the northwest. From the anchorage, we were treated to a peak-a-boo view of Beware Passage and the boats going by.

Once settled, Arlene cooked a breakfast of eggs, bacon and hash browns. There’s something special about the smell of bacon, but when it’s aboard a boat it’s extra heavenly.

We hadn’t been settled for an hour, when suddenly Arlene called out “bear!” She had spotted a black bear across the bay, less than 150 metres away. Maybe it was the smell of bacon that drew him out of the forest, but he had to settle for dining on the grass along the shoreline. One thing is for sure, he didn’t mind that we were anchored in the bay.

We launched the dinghy and set crab traps between the two islets and Cook Island in 30 feet of water, and then motored around the cove for an afternoon of exploration. Cook Island looked inviting to explore, but the rain began falling hard and it would have to wait for another day.

In the late afternoon, I donned the foul weather gear to check the crab traps in hopes of a cracked crab dinner. There were two rock crab and one female Dungeness, which were all returned to the sea. The pots were rebaited and returned to the bottom to soak overnight in hopes of better results the next morning.

The following morning eagles perched in the trees above the cove were calling back and forth. There was one bald eagle on the shoreline feeding on their morning meal. It was low tide and it had dried between the islets. Easy Goin’ was surrounded by a large school of eulachons brightly flashing below the water’s surface.

Eulachon are anadromous fish endemic to the northeastern Pacific and are one of the 10 smelt species. This species is also referred to as candlefish, oolichan and ooligan.

Indigenous communities of the coast made eulachon an important part of their diet, and a valuable trade item with peoples whose territories did not include spawning rivers. The eulachon were used to treat skin rashes and internal diseases, tuberculosis, the flu and intestinal disorders.

Eulachon were also processed for their rich oil, allowing the fish to decompose for a week or more in a pit in the ground, then adding boiling water and skimming off the oil, which would rise to the surface. Eulachon oil, also known as “grease,” was the most important product traded into the interior; as a result, the trails over which the trade was conducted came to be known as grease trails. The Kwakiutl believed that including it as a regular part of their diet ensured good health and if someone got sick, the person consumed extra oil as a tonic and rubbed some on their chest or back. They also believed the oil “made good stomachs.” The Nuxalk used eulachon oil to make red paint by mixing it with ground red rock powder, mashed chinook eggs and urine.

The harvest continues today, eulachon are typically stored frozen and thawed as needed. They may also be dried, smoked or canned. I pulled the crab traps and there was one nice keeper Dungeness. Arlene got so excited; she does love fresh seafood, especially crab.

We weighed anchor and headed for our next gunkhole after the morning’s catch was steamed and placed on ice.