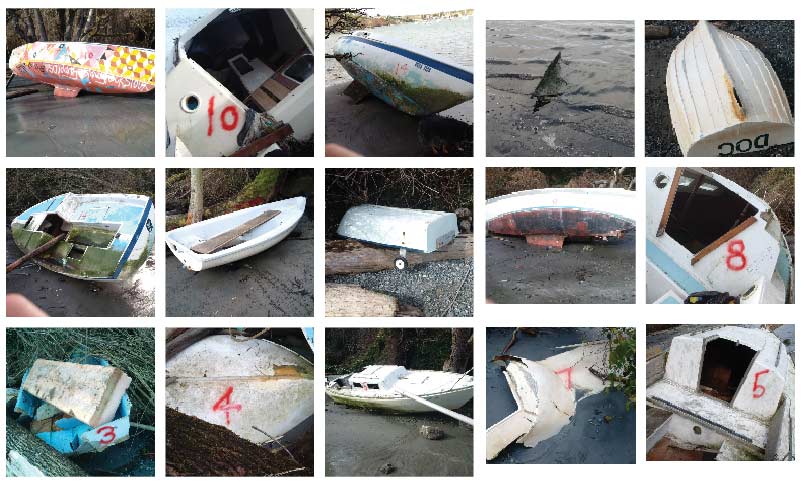 Boats Galore, but on the Beach

Do a search for “derelict boats,” and you’ll find complaints about dead hulls clogging waterways and littering beaches on both Atlantic and Pacific coasts.

British Columbia is certainly not immune to this plague. Just three years ago (Feb. ’14), PY published a feature offering some solutions, but boats continue to be abandoned, wrecked and washed up. And these problems are expensive to cure and rarely fit into federal, provincial or municipal budgets. Just last year, it took $25,000 to remove one ferro-cement wreck from Saanich’s Gyro Park. In addition, B.C.’s problems are exacerbated by a lack of clear understanding on who bears the responsibility and cost of carting off wrecks. Off-loading the problem to another jurisdiction is endemic.

This is what Cadboro Bay Residents’ Association Chair Eric Dahli and the organization’s secretary Jerry Donaldson discovered when they launched an effort to remove what they thought were five wrecks on Cadboro Bay’s beach, which straddles the Oak Bay/Saanich border. But when they explored the Oak Bay beach further, they discovered 16 hulks cluttering the sand. A tally itemized nine dinghies/skiffs, a canoe, five sailboats, a half-buried keel, and, most disturbing, a houseboat’s burned-out steel hull complete with tanks, twin engines and debris. This and several other boats show evidence of petroleum contamination. Everything of value has been stripped by vandals/thieves.

They immediately wrote to the City of Oak Bay mayor and council, pointing out the dangers of this debris. “We are seriously concerned,” Dahli said. “There’s a danger to children. The Gyro Park playground with its popular Cadborosaurus is at the Saanich end of the beach. Inquisitive kids can easily meander down to the Oak Bay end where the derelicts reside. Obviously, there’s an environmental threat. And a fire hazard. We’ve seen evidence of beach fires. Burning fibreglass and fuel can easily catch overhanging trees and destroy some of the mansions on the bluff.”

He also contacted Green Party MLA Andrew Weaver, who asked the provincial Ministry of Forests, Lands and Natural Resource Operations for help. The answer? “After April 1, someone will consult with Oak Bay, evaluate the situation, prepare a cost estimate and priority ranking… [that] will form part of an action plan in the event operational funding becomes available…”

“Yes,” said Dahli, “it’ll disappear in the bureaucratic swamp. We all know that ‘delay is the deadliest form of denial.’”

So how would Dahli solve the problem? “Oak Bay can ask for provincial cost sharing. It’s straightforward. We first have to remove the oil and toxic stuff. Then get a pick-up truck, a strong rope and drag the stuff to the nearby parking lot. A front loader can lift all that trash into a big truck and deliver it to the landfill. It could be done in less than a week.

“All the community wants is a clean, safe beach. It’s totally reasonable.”