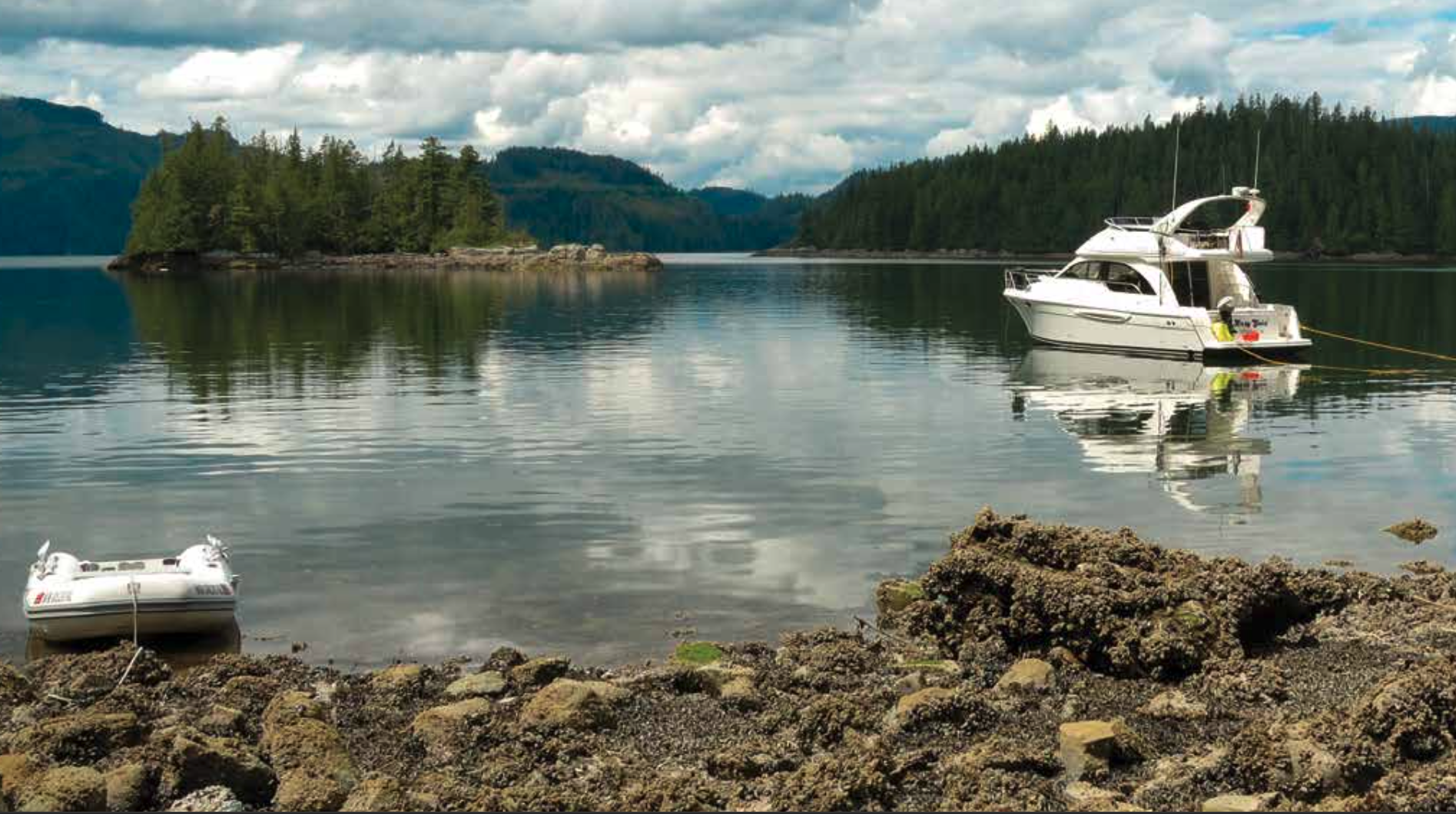 The allure of Broughton Lagoon

Broughton and North Broughton are two of the largest islands in the Broughton archipelago. Situated off Sutlej Channel, they outline Greenway Sound between them. There are very few anchorages in this deep waterway, but during our first visit to the area years ago we discovered a nook in the lee of an unnamed islet near the Broughton Lagoon tidal rapids.

On our last visit we arrived in Greenway Sound and were greeted with calm winds and a partly sunny sky. The forecast was for conditions to continue. We set the anchor in 35 feet of water and backed Easy Goin’ between two drying rocks and ran a stern line ashore, securing us in the cosy nook. The anchorage provided a wonderful view of the unnamed islet, Cecil Island and Greenway Sound, with the soothing low roar of the rapids to keep us company.

In the past, if the afternoon westerlies were predicted we would anchor in the lee of the islet to get some relief. Then the wind would settle down at sunset, providing a comfortable and uneventful night of sleep. There is room in the lee for a couple boats to swing on the hook.

Greenway Sound has a good population of spot prawns and we have done well in the past, so once settled we set the traps to soak in 300 feet of water for a few hours and then it was time to explore the tidal rapids and lagoon. It was perfect timing because it was the tail end of the ebbing tide resulting in minimal flow.

Broughton Island supports three named lagoons, which are guarded by tidal gates where turbulent, fast-flowing water, hazardous rocks and restricted manoeuvring area are the norm. Taking a powerboat or sailboat of any size into any of them would require local knowledge, nerves of steel and good judgment (some would say poor judgment). On the other hand, many boaters, including us, cannot resist exploring these lagoons by dinghy.

With currents in the eight to 10-knot range, the key to exploring the tidal lagoon is recognizing that the constricted entrance prevents the basin from draining quickly as the tide falls or refilling rapidly as it rises. Obviously, timing it correctly gets tricky, and boaters have gotten into serious trouble entering and departing the lagoon.

High slack is usually the best time to either enter or leave the lagoon. Not only is the channel at its deepest and widest, but a less-restricted waterway results in a longer duration of weak flow. Another alternative is to enter on low water, preferably proceeding slowly while the water is still flowing out, so it will be possible to retreat if things get too shallow.

Broughton Lagoon has two reversing tidal rapids entering Greenway Sound: A long, wider one, 300 metres to the north, and a short, direct “chute” through the trees farther south which dries at low water. The northern passage is 30 feet wide with a sharp dogleg in the middle to port and then to starboard, before entering the lagoon.

Once inside, the lagoon opens to become a quiet, secluded uncharted saltwater lake that is approximately three miles long. During one of our visits, we were surprised to find a commercial prawn boat working the waters of the lagoon. It was amazing to see a vessel so large and thought to ourselves they must know the rapids well.

If timed correctly, it’s possible to stay inside the lagoon for 30 minutes on the same tide before returning.

If you decide to go, be prepared to stay until it’s safe to leave and take reserve fuel because once the flow gets going in either direction, the lagoon entrance becomes an extremely dangerous white water rapid with massive hydraulics and unstable standing waves that could easily overwhelm a dinghy or kayak. Work out the slack times in advance, so not to enter or exit the rapids at an unsettling time. That was nearly the situation when we visited the lagoon on our first visit. When we went to exit the lagoon we were a little late and the tide had already begun to flood and the waves in the channel had already started to build. It took nearly full throttle on the eight-horsepower outboard to power the RIB and the two of us through the turbulence.

After returning to Easy Goin’ the balance of the day was spent enjoying our surroundings in the warm afternoon sun.

Hazards: Drying rocks in the area