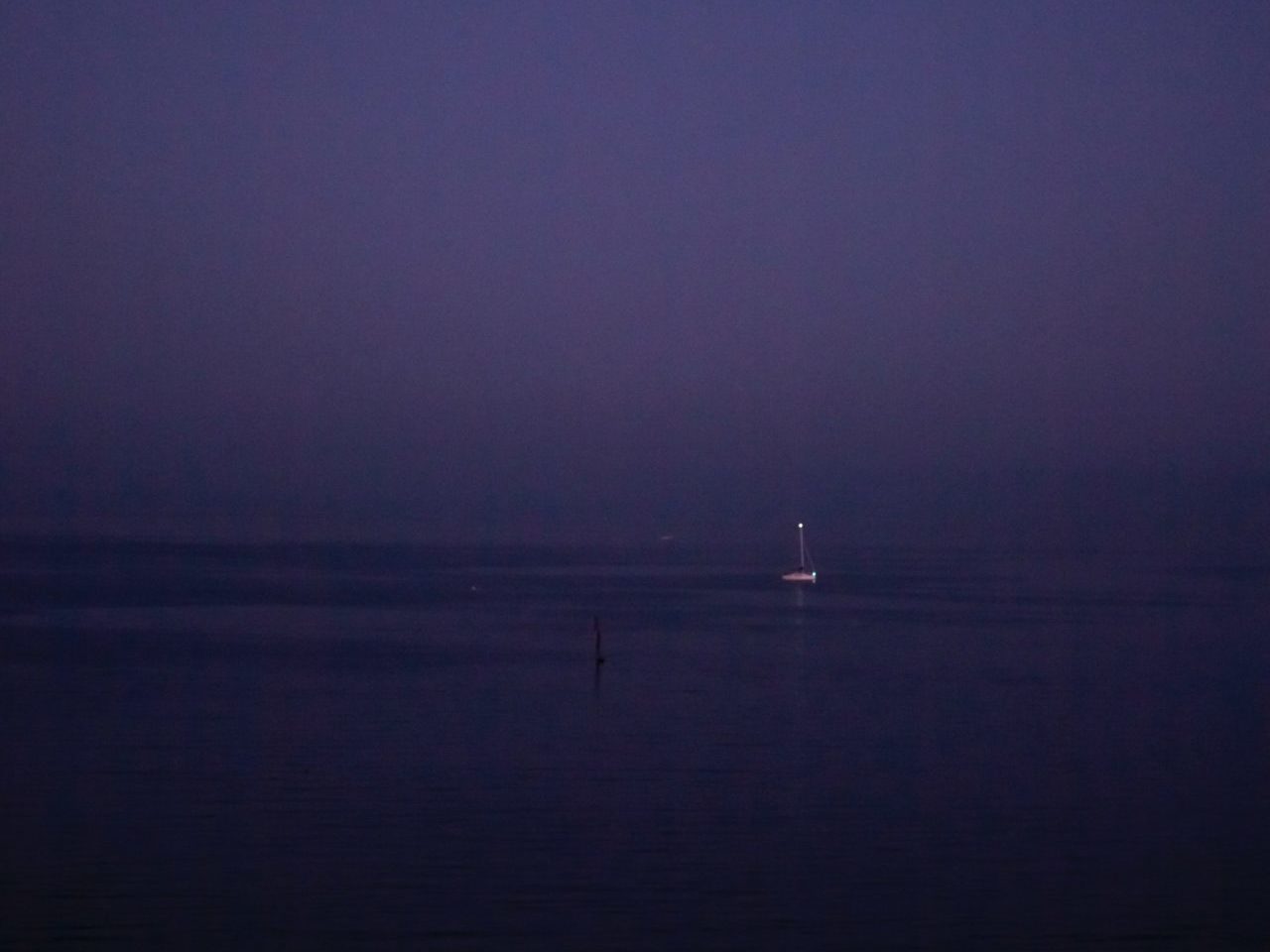 Can You Be Seen in the Dark?

The number of boats heading in multiple directions at the end of Vancouver’s Celebration of Light fireworks event this summer, many with questionable navigation lights, was a good reminder to regularly check the functioning and position of one’s lights, both for one’s own and other boater’s safety. This year, for example, boats returning to the dock were seen with no nav lights at all, with only one sidelight working, motoring with only a masthead tri-light and, most common of all, with red and green lights misaligned up to 20 degrees from dead ahead.

The rules for nav lights, which vary according to the size of vessel, are clearly laid out in Transport Canada’s Safe Boating Guide, a handy document to have on board. A quick reference table on page 30 gives the various requirements for size, whether power or sail, but the finer details of the lights, their vectors and usage necessitates further attention.

Navigation lights indicate who you are and where you are going. By determining the type, relative angle and activity of vessels, then acting appropriately, the danger of collision can be avoided.

Lights are required under the Collision Act to be used from dawn to dusk and in reduced visibility. Generally, recreational vessels from 23 feet (seven metres) to under 65.7 feet (20 metres) will have port and starboard sidelights, a stern light, a masthead (steaming) light and an anchor light. 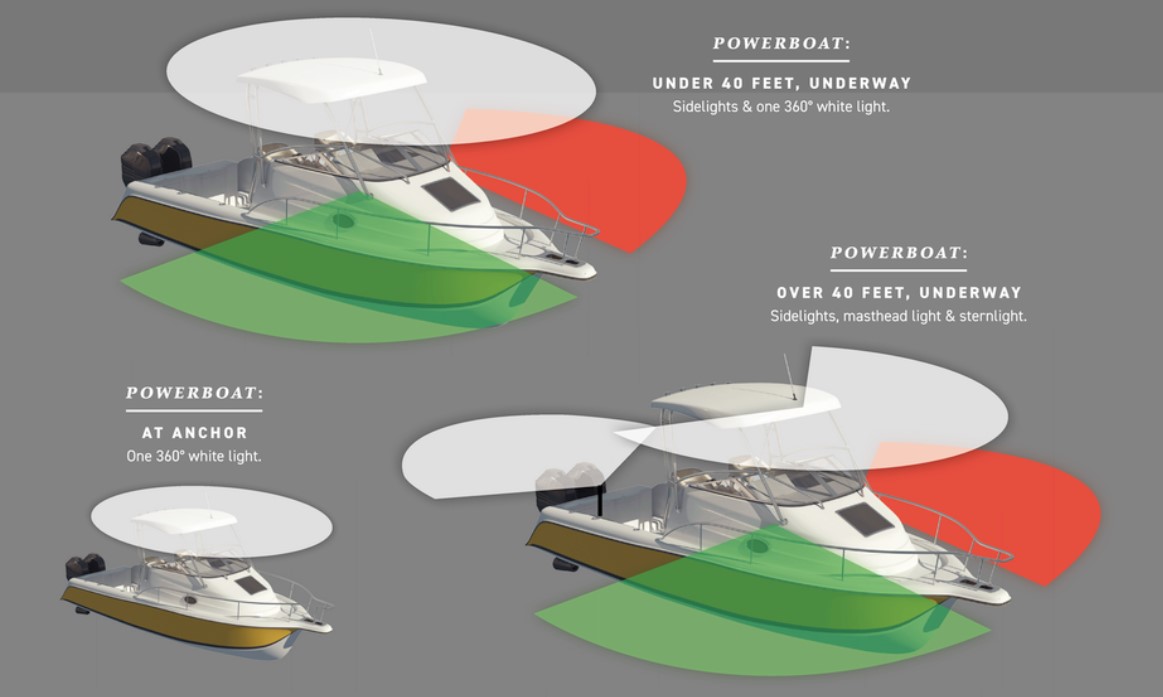 Red port sidelights and green starboard sidelights must shine from dead ahead to 112.5-degrees aft on either side in an unbroken arc. Depending on the size of the vessel they may be separate lights or in one unit. Alignment is critical to portray the correct information. As they must be visible from ahead to abaft the beam they should be at the bow of a sailboat or outside the shrouds, otherwise they can be hidden by the sails.  Powerboaters may have them on the cabin side or at the bow. Be careful of glare from bright objects on board, which can affect night vision. A shiny bow pulpit with sidelights attached, for example, may have to be covered in black tape.

A white sternlight should show in a fixed arc over 135 degrees divided exactly in half on both sides of the boat. When installed correctly, the sidelights and sternlight create a full circle of light.

Sailboats under 65 feet can substitute a tricolour light (tri-light) at the top of the mast for separate sidelights and sternlight. Preferably, this should only be used offshore. When close to land, the distance between the light and the hull, with possible land lights in between, is too confusing to provide distinctive information to other vessels to prevent a collision.

The term masthead light can be confusing. Although called a masthead light by both the Canadian and US governments, it is more commonly known as a steaming light. Masthead (steaming) lights are white and shine from 112.5 degrees on the port side through dead ahead to 112.5 degrees on the starboard side for a total of 225 degrees forward. They indicate that the vessel is under mechanical propulsion. Whereas the masthead (steaming) light on a powerboat is usually located at the top of a short mast, on a sailboat it is generally 2/3 of the way up the forward mast. The masthead light must be located above the sidelights so using the masthead light with a tri-light is incorrect.

When motoring, a sailboat is considered a powerboat and must use a masthead (steaming) light even if the sails are up.

In addition to these lights, large power-driven vessels may have to carry a second white masthead light.  If two masthead lights are used, then the aft one must be higher than the forward one to indicate the direction of travel. 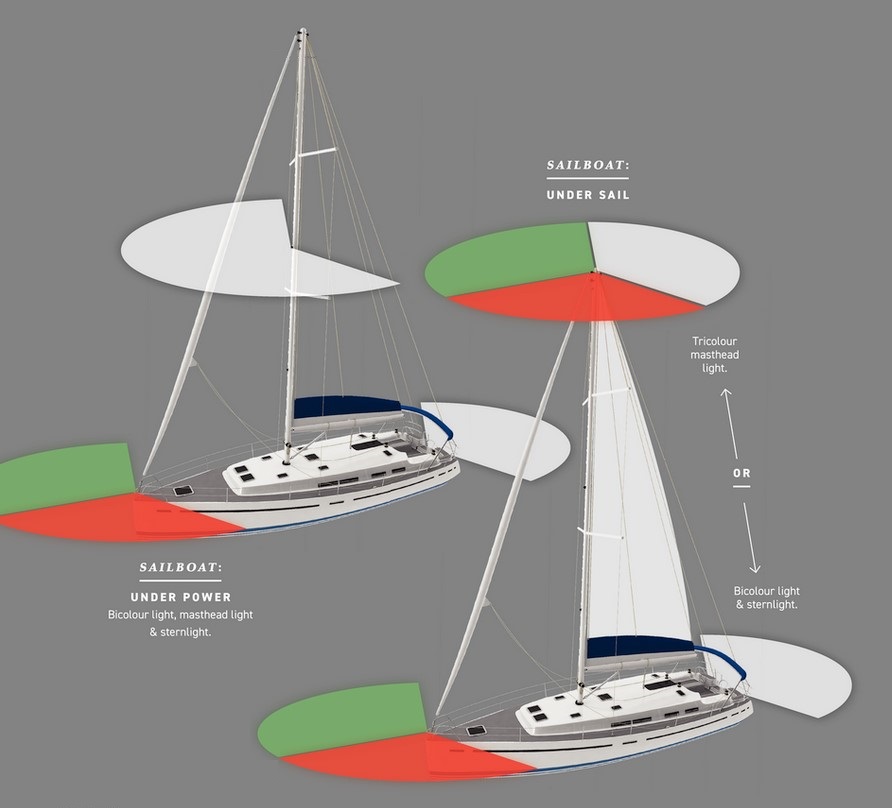 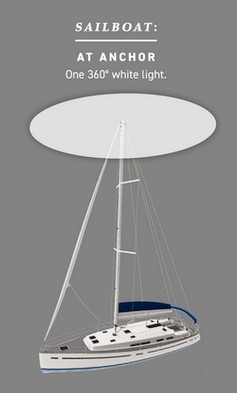 An all-round white light is required when anchored or tied to a mooring (but not to a dock), from dawn to dusk. The best location is at the top of the mast for 360-degree, unbroken visibility.

Vessels under 23 feet (seven metres) with a maximum speed of less than seven knots are not required to carry navigation lights (sidelights and masthead) but many do for safety. If you choose not to, you must still show a white light, such as a handheld flashlight. This is also the rule for human-powered boats. As it is easy to get delayed ashore, it is prudent to always carry a light on board. If at anchor in an anchorage or fairway an all-round white light is required similar to larger vessels. An alternative option is to illuminate the deck with whatever light you have available.

Besides the types and vectors of lights, their intensity is also delineated according to the size of the vessel.

When anchored outside a designated anchorage, an anchor light should have two miles of visibility.

Rules of the Road

To avoid a collision, it is necessary to recognize other vessels’ lights, whether underway or at anchor. By correctly gauging the intentions of the boats around you you can act appropriately. Navigating can be challenging at night compared to daylight, with recognition and distance more difficult to ascertain. Being comfortable with the maritime rules of the road leads to calm, good decisions in all conditions.

Be warned that navigation lights that come with your boat may or not be correct or accurately positioned. Some builders in the past seem to have mounted their lights more for aesthetic reasons than safety. Inspect the position of your navigation lights when buying a new (or new to you) boat.

Local cruising distances are often short, and with debris in the water, it is unusual to cruise in the dark, so it can be easy to neglect nav lights. But boating at night can be a wonderful experience and watching the fireworks close-to from one’s boat provides a special evening for family and friends. Checking the function of the boat’s nav lights on a regular basis is prudent for safe cruising after dark.

Liza Copeland is the author of four books on cruising.