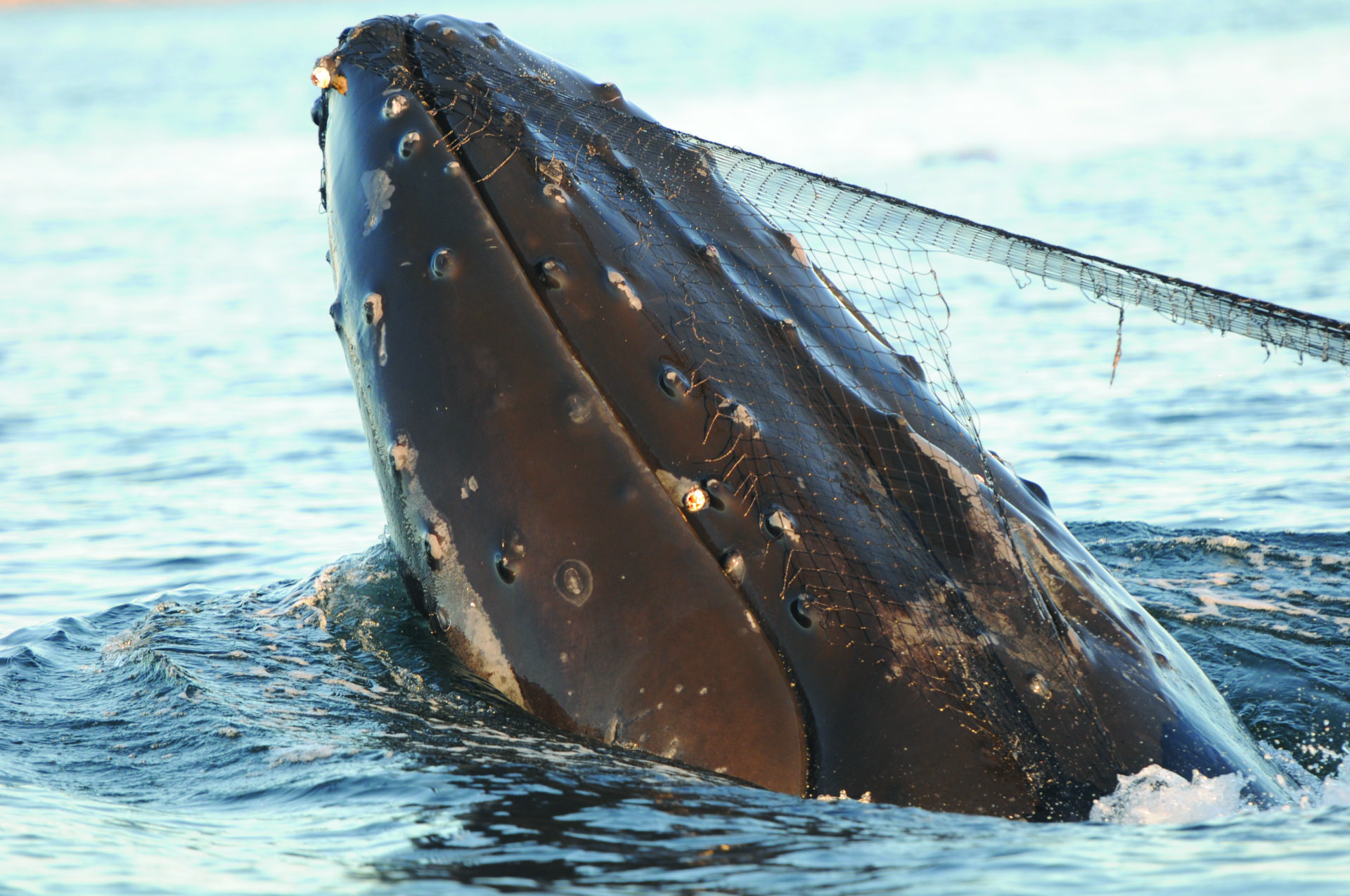 No one can deny that abandoned fishing gear is harmful to marine wildlife on our coast. But there are ways to reduce “ghost fishing.” Here’s how:

A whale and her calf spyhop 20 metres from shore, astounding campers gathered at a granite edge. Sea lions bark and slip back into the sea alarmed by the thrilled beach walkers. Salmon leap, silver blades slicing the air, mere feet from kayakers. As pleasure boaters, most of us have similar stories. These extraordinary and awe-inspiring encounters are a big part of why we are on the water in the first place. Looking forward to such encounters keeps us watching vigilantly through our binoculars and straining our ears for the sound of a whale’s exhale.

But unbeknownst to many of us, the creatures who add such joy and exhilaration to our boating experiences face a hidden danger. Beneath our vessels, many of these animals are falling victim to derelict fishing gear.

The term derelict fishing gear includes all types of equipment used for both recreational and commercial fishing. Gill and seine nets, crab and shrimp pots, fish traps, ropes, hooks and lines are all types of fishing gear that are lost, abandoned or thrown away into the water. Fishing gear can get snagged, torn or cut on rocks and other obstacles below the surface. Nets and lines may be cut and abandoned during severe weather conditions. This lost and abandoned fishing debris can then indiscriminately “ghost fish” for decades. Ghost fishing is the ongoing trapping and killing of marine animals by this derelict fishing gear.

In the past, fishing gear was made from natural materials that decomposed over time, thereby limiting the ongoing effect of the waste. But modern nets and lines are made from plastics such as nylon, polyethylene and polypropylene. They do not break down, nor are they affected by mold or bacteria. They will persist in the environment indefinitely.

The effects of derelict fishing gear are a unique threat to the recovery of humpback and grey whale populations in the Pacific Ocean. These baleen whales do not have the highly advanced echolocation, or bio-sonar, that toothed whales have (which helps toothed whales detect obstacles in the water). Because of this, baleens are unable to “see” the fine mesh of nets or the ropes attached to the gear that drift and hang in the ocean. When a humpback or a grey whale runs into fishing gear, they panic and thrash trying to free themselves, typically worsening their entanglement. Lines and ropes become wrapped around their bodies, tail flukes, and pectoral fins. Since fishing gear is often hundreds of feet long and can weigh several tons, the whales become exhausted. Some drown because the weight of the gear prevents them surfacing for air. Others will carry the gear around for weeks or even months until they slowly die of starvation or from infection from the deep cuts that nets cause in their flesh. The lucky ones are rescued by the few people qualified to disentangle them. You can read our story about The Art and Science of Whale Disentanglement here.

A single humpback’s death has repercussions far beyond the individual. Humpback whales are social creatures with long lifespans and memories. Even though they do not live in pods, they will meet up and spend time with their family members when they are in the same area at the same time, much as we do. The loss of a whale to derelict fishing gear causes disruption and fissures within the complex social world they occupied.

Examples abound. In 2012, a juvenile humpback whale beached itself in White Rock, B.C. He had a massive amount of nylon fishing gear tangled within the baleen in his mouth. The whale was emaciated because the gear prevented him from eating. Dr. Martin Haulena of the Vancouver Aquarium said the whale must have starved for weeks to end up in such a condition. Several wounds caused by the fishing gear cutting into his skin had even had time to heal and scar. The weak and injured young whale died on the beach.

In September 2014, a humpback whale wrapped up in hundreds of metres of fishing line was spotted near Tofino. Fisheries and Oceans Canada (DFO) tried to free the whale but the tether line they attached to the gear broke. The fishing gear was wrapped around the whale’s body, pectoral fins, and tail. The whale’s fate is still unknown.

Orca, like other marine mammals, face many threats to their survival. Noise pollution from ever-increasing traffic, shortages of food due to overfishing and the loss of salmon spawning habitat and detrimental health problems from toxic contamination levels in their bodies caused by pollution.

Some populations, such as the southern resident killer whales, are in such a critical position they cannot sustain any more losses. These whales have been historically well established in the North Pacific but now, with only *80 members left, are in danger of becoming extinct.

Not only do whales get entangled in fishing gear, their food does too. Transient killer whales prey on mammals such as seals, sea lions and porpoises. Thousands of these animals are killed each year from derelict fishing gear, including the salmon the southern resident orcas depend upon.

*Updated: Only 73 southern resident killer whales remained as of August, 2019.

Gillnets are the most common type of lost gear. These nets, often used for catching salmon and herring in near-shore waters, are massive, and the largest ones span 1,200 feet. Typically made from a plastic or monofilament mesh of various sizes, gillnets catch fish who swim in to the net and become trapped. They cannot swim out because the net is caught around their gill covers. Although gillnets are intended for a particular size of fish, catching non-targeted species is hard to avoid.

While initiatives to remove derelict fishing gear exist off the west coast of the U.S. (In the Puget Sound area, the NWSI Derelict Fishing Gear Program has removed over 2,500 derelict crab pots and 4,000 ghost nets since 2002. This gear was entangling more than two million animals each year) the federal government of Canada does not currently support a derelict fishing gear removal program for the B.C. coast.

Cetus Research and Conservation Society, a non-profit organization in Victoria, B.C., is working to develop a removal program for our waters. Cetus hopes to develop a network of gear removal in the general area by partnering with NWSI, the Living Oceans Society and a variety of other non-profit organizations in the region. Their goal is to also work with the DFO, commercial and recreational fishermen, divers and boaters of all stripes to locate and remove derelict gear. Their aim is to protect the endangered Southern Resident Killer Whale population and the threatened Northern Resident Killer Whales, along with all other affected marine mammals, fish, birds and invertebrates. A feasibility study has been conducted, and training shared between organizations. Cetus has begun to collect data on known locations of derelict gear along the southern coastline of Vancouver Island. However, the federal and provincial governments haven’t yet commited any financial support to the program, so the organization is starting an initiative to secure independent funds.

There are ways boaters can help. In addition to utilizing the reporting information in the sidebar, you can volunteer your time with local organizations that assist in derelict fishing gear removal from local waters and beaches. Such organizations include the Surf Rider Foundation, the Living Oceans Society and the T. Buck Suzuki Foundation. You can also donate money to NWSI and Cetus to support the creation of a comprehensive reclamation program.

The oceans are vast, and were once filled to the brim with life. They sustain us all, and it is up to us to return the favour. Water-lovers relish in being mystified and awestruck by the size, the grace, the power and the beauty of whales in the wild. We are amazed at the sight of a bald eagle diving, or a salmon jumping. Nature provides us with these breathtaking moments, which locate us in the world and give the broadest possible meaning to our lives. But these moments will cease to happen if we don’t take care of the wild places these animals call home.

Everyone can have a positive impact on derelict fishing gear. Pick up what you can. Report what you see. Support the initiatives striving to eliminate the danger.

About Cetus Research and Conservation Society: Cetus operates two on-the-water programs along the south-west coast of BC: Straitwatch out of Victoria and Alert Bay, and the Robson Bight Warden Program in Johnstone Strait. These programs involve providing direct on-water education to private boats about safe whale-watching practices.

The Northwest Straits Initiative’s (NWSI) Derelict Fishing Gear Program, based in Washington, has determined that 136,780 marine mammals die each year from the estimated 200 derelict nets in Puget Sound’s sub-tidal zones alone. There have been over 50 reports of whales, dolphins and porpoises being entangled in fishing gear in this same area since 2008. A study in the U.S. found that only about 10 percent of large whale entanglements are ever witnessed.

Anyone on the water who comes across derelict fishing gear can report what they find (and where they find it!) by contacting the NWSI and Cetus Research. In fact, you can fill out a Derelict Fishing Gear Reporting Form here or you can call (360) 733-1725. You can also email info@cetussociety.org and provide details about where, when and what type of gear you have found.