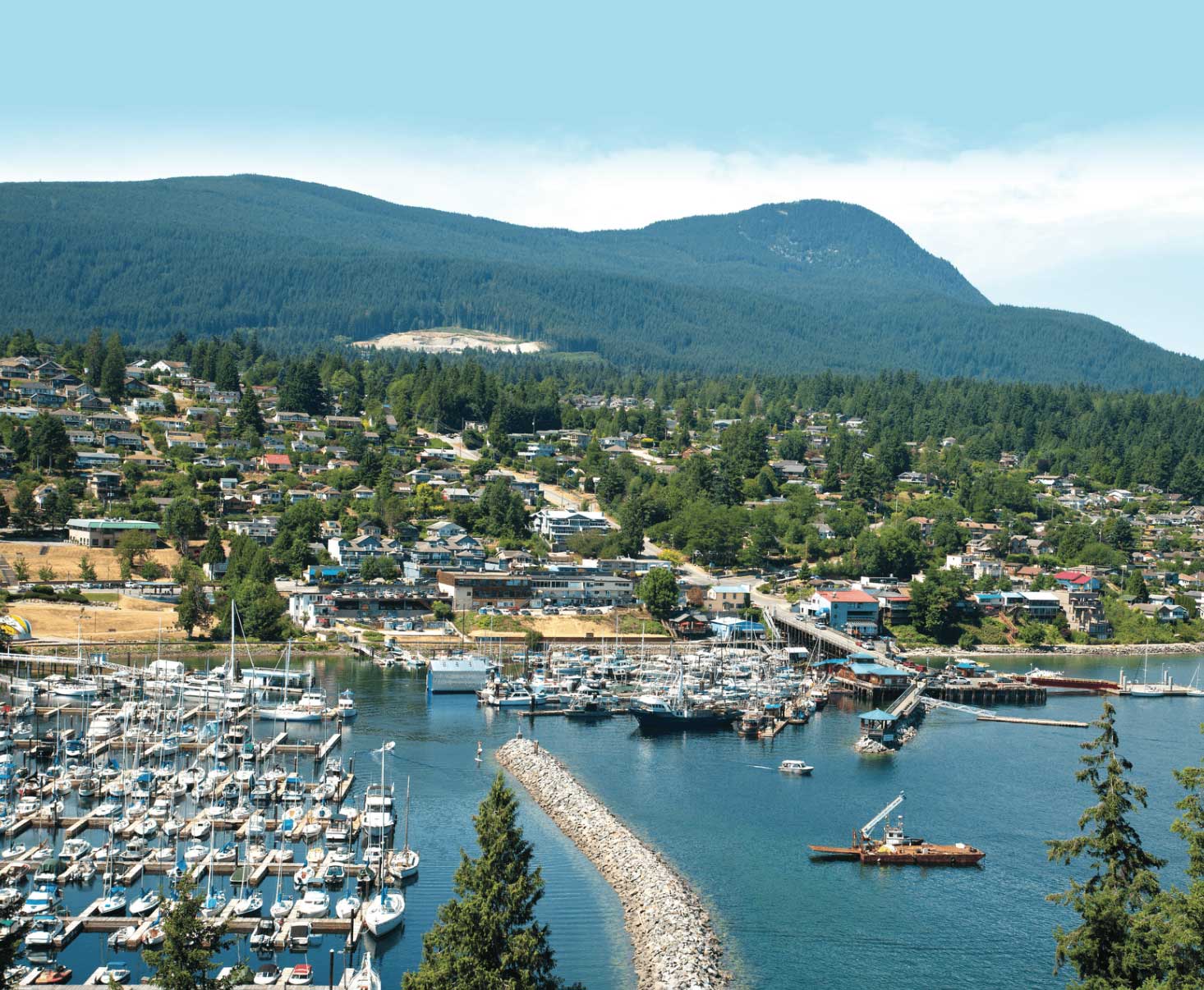 Once known as the “Gulf Coast Riviera” Gibsons has always been a tourist destination. Today, its marinas and amenities make it a top stop for cruisers heading along the sunshine coast.

SOME FOLKS CALL Gibsons Landing the Gateway to the Sunshine Coast. Many remember Gibsons as home to the popular TV show The Beachcombers. From our last mid-’90s visit, we recall Gibsons Landing as a cute seaside village perched on the banks of Howe Sound, not far from the Strait of Georgia.

While researching an article, recently, about the role of the Union Steamship Company in the development of the B.C. coast, I found repeated mentions of Gibsons Landing. This, plus the fact that Gibsons’ waterfront has undergone some upgrades of late, had us headed up Howe Sound in June to revisit this charming town of 4,500 people.

GETTING TO GIBSONS LANDING We suspect that many boaters may not have discovered Gibsons Landing as it is tucked behind Keats Island on Howe Sound, slightly off the main cruise route north. To get to Gibsons from the Strait of Georgia, head to what the locals call “the gap” or Shoal Channel running between Keats Island and the mainland. To cross, know your depth (following the 20- to 30-foot contour gives you seven feet at zero tide), use chart 3463 for the crossing then switch to chart 3526 when approaching Popham Island. If a strong southerly is blowing, go around Keats Island, stay mid-channel and catch the spectacular Howe Sound views of the Coast Mountains.

When approaching Gibsons Harbour you will see two rip-rap breakwaters— one with a boardwalk and gazebo—that protect the Gibsons Landing Harbour Authority docks, Gibsons Marina and Smitty’s dock.

GIBSONS LANDING HARBOUR AUTHORITY The GLHA docks are to starboard of the breakwater with the boardwalk and gazebo, which are new additions since our last visit. Also new is the nice log of office building toward shore.

The marina docks have 30- and 50-amp power, washrooms, showers, laundry, pumpout, garbage disposal, wi and are protected by security cameras.

While permanent tenants take most of the moorage space, staff will find you a spot using slips vacated by residents and fishing boats that are out during summer months. Call the marina staff at 604-886- 8017 or VHF 66A to check availability.

By coincidence, the day we land is also the day some 20 sailboats from our hometown of Nanaimo arrive and fill the harbour’s empty slips. We find Wayne Corrie busily tidying up his trimaran Mail Order Bride after the race, and he kindly takes a moment to talk to us. We learn that Nanaimo Yacht Club runs two sail races a year to Gibsons Landing.

About the race and Gibsons Landing, Corrie said, “We had a really great crossing. We’ll stay the night and likely head to Smitty’s Oyster House for dinner. We’re impressed by Bill (harbour manager Bill Oakford), who always finds room for us all. It amazes me that we always find it warm here, even in October when we hold our second race.”

An 80-foot dock for day-stops has been added on the east side of the breakwater and is busy during our visit. In 2013 a new drive-in commercial dock was added to service commercial vessels and the fishing fleet, plus it has space available for larger visiting craft. Vessels 45 feet and larger can call to reserve space.

If you prefer to anchor off, there is ample room to drop the hook to the east of the breakwater. Dinghies can tie up at the head of the day dock. Note that the anchorage is exposed and best suited for settled weather.

GIBSONS MARINA If you veer slightly to port past the breakwater, you will be pointed at Gibsons Marina’s A dock, for visitors. To check availability of the 20 slips, call the marina 604-886-8686 or VHF 66A. When the visitors dock is full, staff will direct you to vacated slips.

The marina supplies 15-amp power with some 30-amp connections available. There are washrooms, showers, a chandlery, laundry, a pumpout and a launch ramp. The nearby fuel dock is operated as Hyak Marine (owned by Gibsons Marina) and has a few slips for visitors. Call 604-886-9011.

SMITTY’S DOCK Used more as a lunch or dinner stop for popular Smitty’s Oyster House, Smitty’s is the last dock next to the shoreline and the Seawalk. Look for the blue building to starboard past the GLHA marina. Call 604-886-4665.

WHEN IN GIBSONS LANDING Being small, just about everything is within walking distance of the marinas and anchorage via the Seawalk, the shoreline walkway that joins the marinas and fronts on Winegarden Waterfront Park. Visitors will find a village complete with rows of shops, pubs, entertainment, coffee shops, gift and art galleries, and some very good restaurants.

To provision the boat, you can find the basics at Fong’s Market or The Village Store, both on Marine Drive. However, major provisioning requires a bus or cab ride to Upper Gibsons’ Super Valu or IGA Plus supermarkets. Call Sunshine Coast Taxi 604-886-7337.

Gibsons has several open-air markets during the summer months. On Friday afternoons you can get fresh, local produce at the Farmers’ Market across from Gibsons Marina. The Sunday Market is open 10:00 to 15:00 in Holland Park. Thursday evenings, 17:00 to 21:00, drop by the Gibsons Night Market at 626 Shaw Road.

If the crew needs filling up, there are excellent dining choices just steps from the boat. For a quick bite, try a tasty pulled pork sandwich from the Smoke on the Water Barbecue Shack at the top of the ramp next to the marina building.

In chatting with other cruisers we found out about the SweetWater Bistro on Gower Point Road. This is the place for fabulous seafood served on the deck. Call for reservations 604-886-2024.

Speaking of seafood, Smitty’s Oyster House on the Seawalk is famous. Marianne, our oyster expert, gives it a big thumbs up. And then, speaking of famous, we just had to visit Molly’s Reach, home to the CBC TV series The Beachcombers. I loved our lunch of fish and chips served with a large dollop of nostalgia in this busy old building.

Kitty-corner from Molly’s Reach is the Visitor Information Centre. If you are into hiking and biking, stop by for maps of the area’s trails (https://sunshinecoastcanada.com/).

Beside Molly’s is Molly’s Lane, an eclectic mix of small shops containing all sorts of treasures new and not-so-new. Above the entrance to Molly’s Lane sits the Persephone, the little tug/workboat that portrayed the log salvage boat driven by the main Beachcomber character Nick Adonidas. The tug’s television name, taken from the Greek goddess Persephone, reflects Nick Adonidas’ supposed Greek heritage. Bruno Gerussi, who played Nick was actually Italian-Canadian born. Carrying on along Gower Point Road takes you past Gibsons Quay, a row of unique shops. Overlooking the harbour is Winegarden Park, home of the Gibsons Landing Jazz Festival; the music fest celebrated its 20th annual event in June.

Further up Gower Point Road is the Sunshine Coast Museum and Archives, with information and displays on the Union Steamship Company, Gibsons’ early logging, fishing and farming, plus one the largest shell collections in Canada. Of interest, too, is memorabilia from The Beachcombers TV series.

While walking Gibsons docks, we noticed more than the usual number of boaters relaxing with feet up in the cockpit enjoying the view of the Coast Mountains rising up above Gibsons’ public dock. There really is a comforting small town ambiance surrounding the marina and Gibsons Landing that makes you want to slow down and enjoy life.

How much longer Gibsons Landing can maintain its quaint seaside village feeling is presently up for debate. On the drawing board is a hotel/condo development called ‘The George’ (georgegibsonshotel.com) to be built alongside Gibsons Marina. The debate is not whether a hotel should be built but, rather, what size and scale it should be in order to preserve Gibsons Landings’ seaside village ambiance. Whether you view Gibsons Landing as a stopover or a destination, now might be the time to see why just five years ago it was deemed “Most Livable Community in the World” (population under 20,000) by the United Nations-sponsored LivCom awards.

The only way to get to B.C.’s early coastal communities was by boat. Passengers and supplies were dropped and shipped of at the settlement’s wharf. Tugboats and small boats initially served Gibsons Landing until 1891 when the Union Steamship Company (USSCo) became the Sunshine Coast’s main transport link. 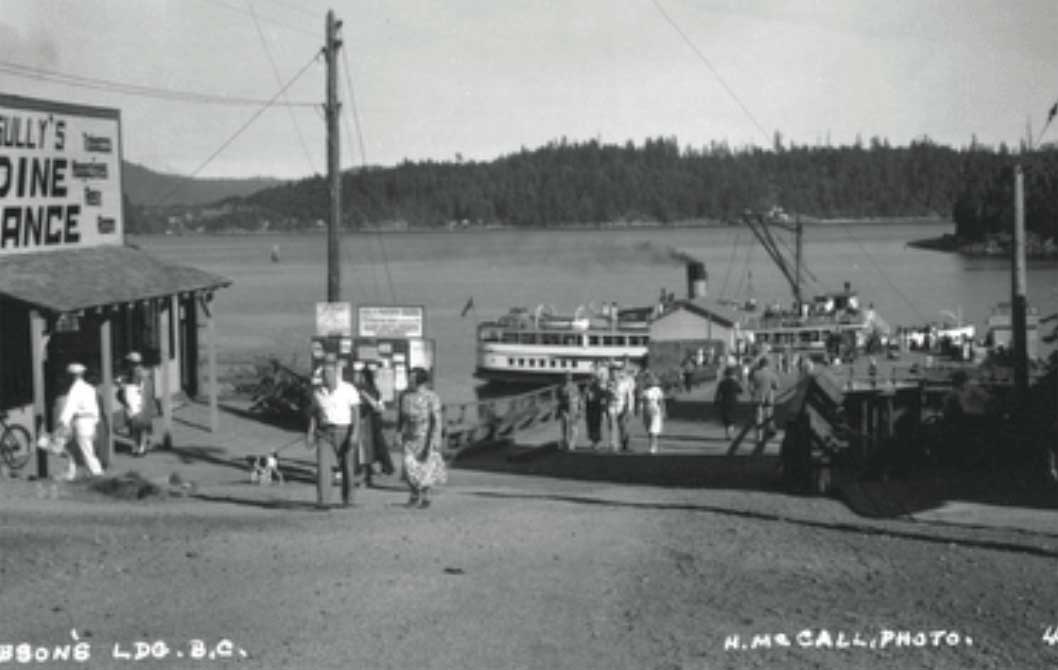 The first ships to make the run from Vancouver to Howe Sound were the SS Comox and SS Capilano. Later, one of the better-known ships was the SS Chasina. Built in 1881 in Glasgow as the steam yacht Santa Cecilia for the Marquis of Anglesea, she was renamed the Selma in 1917 and operated on the Vancouver to Powell River route before being purchased by Union Steamships in 1917. She was renamed the Chasina.

In 1924 USSCo launched the Lady Alexandra, the largest capacity excursion vessel operating north of San Francisco, and began making summer cruise visits to Gibsons Landing and the coast, then called the “Gulf Coast Riviera.” From this time onwards, tourism developed into an important industry for the region. USSCo coastal service continued into the 1950s but declined after 1951 when Black Ball Ferries Ltd. (Canada) began serving the B.C. coast, which was the forerunner of the BC Ferry Corporation.