“The focus of my life,” said Gordon, “is accuracy. I don’t paint pretty pictures. There are many fine painters who’re not necessarily precise. Some paint rubbish. And I don’t want to add paintings that are not right.” 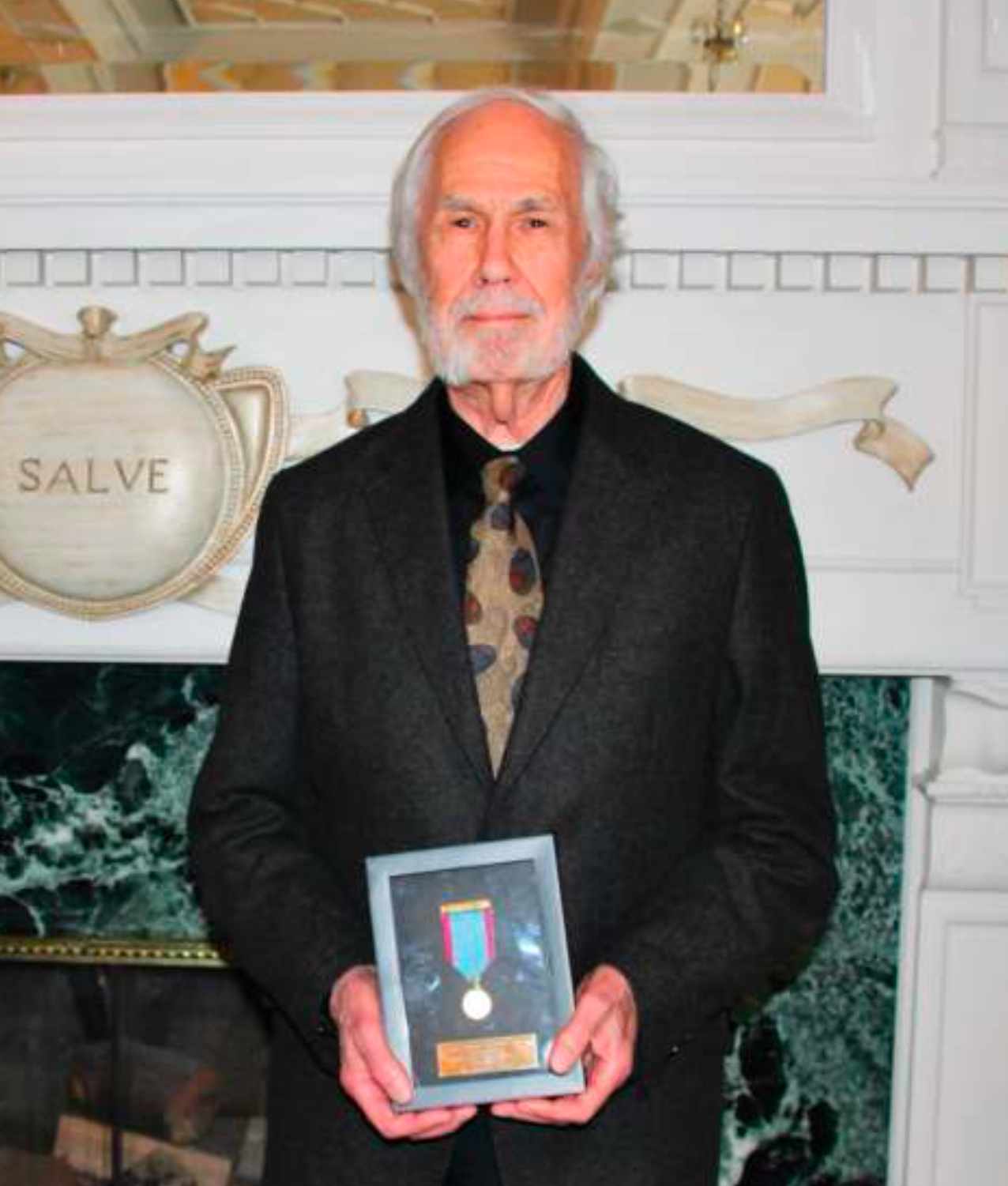 Precision is indeed what distinguishes Gordon’s paintings as revealed in his award-winning book, Voyages: To the New World and Beyond. His main interest is in the mid-18th century and later ships and crews who explored the great oceans, including the Pacific West Coast. The paintings are accompanied by his carefully researched and elegant history of exploration, and the evolution of ships and shipping. Each image’s caption provides further details about the ship, its era and its setting. His friend and colleague John McKay quoted Gordon thusly, “My goal is to accurately portray history, not to glorify it.”

Few artists are also historians, and few historians have the talent to illustrate the people and events they study. His paintings of ships under sail, wrecked on a lee shore, in storms and in cities are luminous. Many are depicted under full sail, always in motion, taking the reader back to the glory days of sail, before coal and bunker oil took over. He also depicts later paddlewheelers and motorized ships. One that particularly struck me is the HMS Bounty in Tahiti surrounded by local people in their outrigger canoes, with dark volcanic mountains in the background.

To ensure the locale of his sailing ships is truthful, he scoured logs of the era, so that even the weather on a specific date is the correct. “I’d painted Captain Vancouver’s Discovery and Chatham in glorious light,” he told me, “but the log showed it was a cloudy day. I changed the painting.”

Most of the ships he depicts are European—manned by seafarers from Scandinavia, the Netherlands, Italy, the Iberian Peninsula, France and Britain who left their coastal waters to sail far beyond the horizon. The north Pacific was the most distant from Europe and therefore the last to be “discovered” and charted. As Gordon writes, “… the driving force behind the world exploration was their passion for the luxuries of life. First it was the spices and other exotic products of the Orient, followed by gold and ivory from Africa. Then it was gold, silver, beaver pelts and coffee from the Americas and finally, rich pelts of sea otters on the northwest coast of North America.”

Gordon was born 89 years ago in Winnipeg. From an early age, he hankered to escape his landlocked life, so by age 18, he’d travelled west to Vancouver, drawn, as he writes, “…to the seas sailed by Leif Ericsson and Christopher Columbus…”

Living near salt water wasn’t his only ambition. Gordon had drawn, sketched and painted as soon as he was old enough to hold a pencil or a paint brush. A favourite uncle had offered him a place to stay. Thus, having a roof over his head, he enrolled at the Vancouver School of Art. But how to pay for tuition? “I saw seamen going in and out of a building across the street from the art school,” recalled Gordon. “I walked in and asked for work.”

His first job was aboard the Princess of Nanaimo travelling between Vancouver and Nanaimo, but what really built his sea legs was working as a seaman during a three-month voyage aboard CPR’s Princess Louise which brought him to Skagway, Alaska. “The ship held luxury accommodations for passengers as well as cargo,” said Gordon. “It was a union job, so the pay was good.”
Gordon’s watch ended at midnight

and if the ship was moored, he’d go for a hike. Other rotating watches allowed him to see the entire Inside Passage and left a deep impression. “I was lucky,” he said. “I was too young to serve during the Second World War and was able to take advantage of the post-war boom. There were lots of summer jobs.”

Gordon continued his summer marine employment, which paid the bills while he perfected his artistic skills during his five years at art school. After graduation, he visited Italy, France, England and Ireland—naturally, museums were high on the list.

After art school, Gordon joined CBC as a graphic designer, then switched to become a designer at Hopping, Kovach and Grinnell, a well-known design firm. He then became the designer for the Vancouver Museum and Vancouver’s Maritime Museum. “I designed whole exhibits in these jobs,” he said. “From the broad conception down to the details. It helped promote these museums.”

By 1975, he’d opted to freelance and take commissions. His design and illustration reputation gained traction and his work had begun to be exhibited and collected. His subsequent career continued to be wide ranging, in some ways resembling the gig economy of today.

The lead-up to the George Vancouver bicentenary in 1992 was Gordon’s impetus to begin serious research on BC’s maritime history—learning about both Indigenous and European contributions. “I got to know Indigenous artists like Bill Reid and Tony Hunt, and anthropologists like Michael Kew and Wilson Duff,” he recalled.

One of his favourite projects was the UBC Museum of Anthropology commission to provide illustrations of Indigenous villages for its Great Hall labels (labels provide information to visitors and may provide meaning to a work of art). This led to further work with Parks Canada and a week-long visit to Haida Gwaii where he and colleagues studied village sites, their totems and long houses. For his own interest, he painted the village of Ninstints (SG̱ang Gwaay) on Anthony Island, which lies in the Pacific off Haida Gwaii’s southern tip. His paintings and drawings were included in George MacDonald’s books on Ninstints and the later seminal volume on Haida’s monumental art. Gordon’s painting of Ninstints is now in the Canadian Museum of History, along with two further commissioned depictions of Indigenous villages.

He designed many book covers, including the cover and the interior visuals of The Journal of Etienne Mercier, by David Bouchard. Mercier is a fictional, quirky narrator who visits Haida Gwaii in 1853.

A Vancouver-based dealer of Indigenous art invited Gordon to produce limited edition prints and art cards of Indigenous scenes in maritime settings. “These were popular and added significantly to our income,” said Gordon.

“I’d always been interested in architecture, and I’d designed houses for fun” he continued. “We’d bought a house in Kitsilano, then gutted, redesigned and rebuilt it, followed by a similar project. People showed up at the door and asked me to design or redesign a home for them. I designed a house a year for 35 years.

“Looking back, I can see…my attraction to the sea has been the constant force in my life,” he said. He’d started rowing small boats with friends when he first arrived in Vancouver. Later, he and his family acquired a 30-foot, Bristol Bay double-ended gillnetter that naval architect William “Bill” Garden converted into a ketch. It was followed by a 12-ton Stan Huntingford ketch, and finally a 27-footer from Ted Brewer’s drawing board. Their 60 years of sailing ranged from Puget Sound to Haida Gwaii and allowed Gordon to intensely study the waterways and landscapes of the Inside Passage. He and his wife, Dale, sailed till Gordon reached age 85 when he swallowed the anchor.

Gordon hasn’t stopped painting and has another book ready to go as soon as he finds a publisher. For his work on maritime history and his resplendent paintings, he was awarded the Maritime Museum of BC’s SS Beaver Medal in 2020.