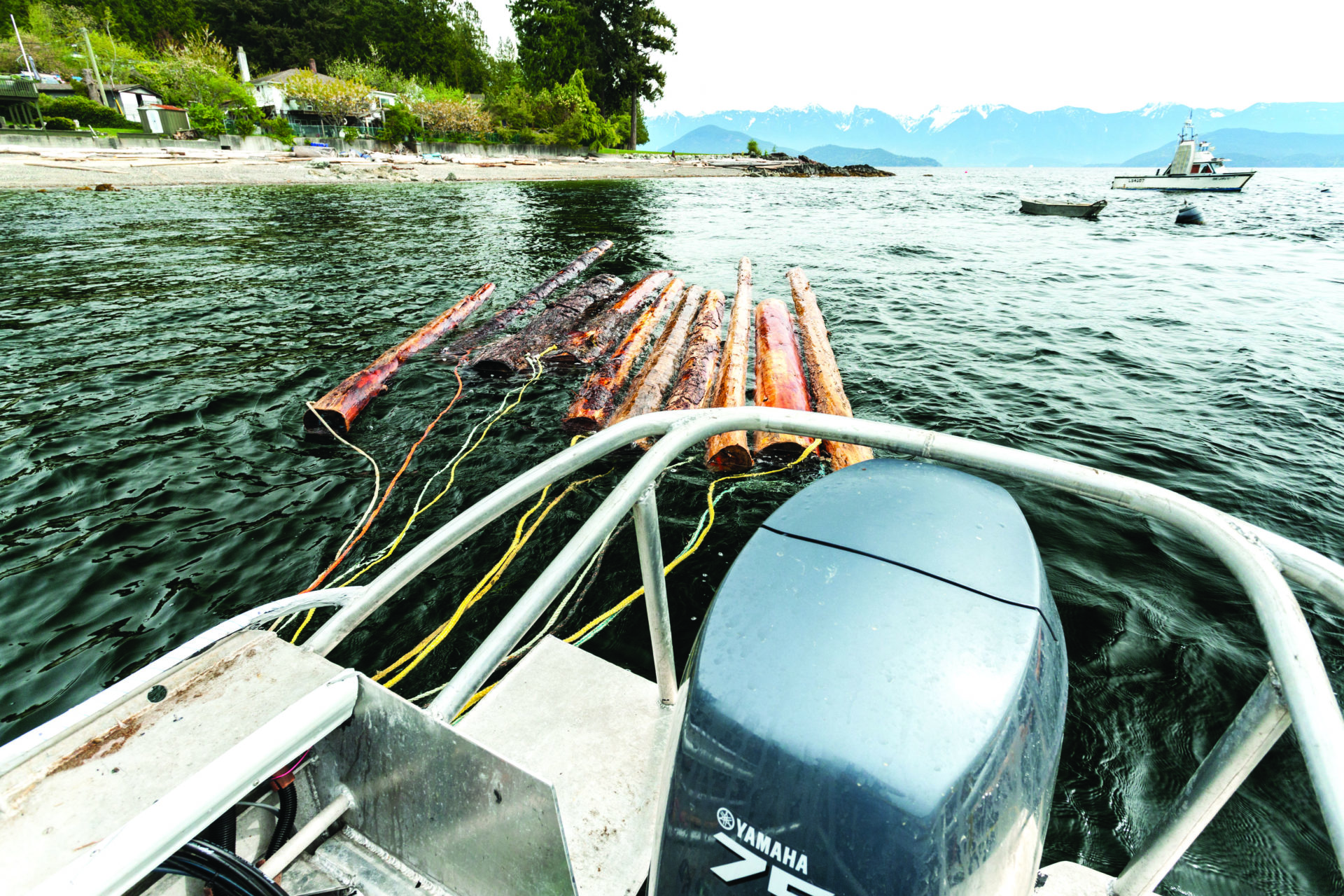 It may not be glamourous work, but log salvage helps keep our waterways clear

At a recent rendezvous the conversation among the sailors drifted to floating debris (pun intended) and we were surprised that almost every boat had a story of hitting a log or two. Ours was a good-sized log we encountered broadside while making the transit around Cape Caution. It hit the bow, rolled completely down our sloping keel, missed the prop, floated up just enough to give the skeg a wallop thereby prompting us to turn and look aft as it bobbed to the surface just before our trailing dinghy skidded over it. Like many, our vessels survived without so much as a scratch in the bottom paint, though our hearts at the time suffered a good deal more trauma.

Floating logs along our forested coast are pretty common, especially during freshet and the high summer tides. Trees fall into water all the time and we have a very active forest industry that shares the waterways with other commercial vessels and recreational boaters. Some of that floating timber is valuable and that’s where log salvors come in. With a salvage permit in hand, beachcombers can locate and pull logs off the shore. In the Lower Mainland, salvors can bring logs to the Western Log Sort and Salvage Coop and collect up to 125 percent of the market value, with that pricing helping to encourage log salvage.

Many times we’ve observed single logs being rolled off the beach in a coordinated effort between the shore crew and the boat. It’s not an easy job. It’s a long shoreline and quite a bit of fuel and boat maintenance can be chewed up trying to make a profit. But it is also an important service as even heavy commercial vessels colliding with logs can be seriously damaged or sink.

Recently we watched two log bundles that had escaped from a boom being rescued from the shores of English Bay near Dundarave Pier in West Vancouver and we marvelled at the expertise of Ted Johnstone, the sole salvor aboard the Night Stalker.

The whole operation reminded me of the Persephone, on display in Gibsons, from the old TV show Beachcombers. The little steel vessel slowly nosed up toward the shore alongside one bundle of logs at high tide avoiding, at least this time, collisions with the rocks in the shallow water.

Reaching precariously over the side he secured a large pin with heavy axe blows into one of the logs and then tied a line to it. He played out a long line and reversed while spinning his boat. With the first boom free of the shore and under tow the Night Stalker headed toward Navvy Jack Point and a second bundle of logs.

In the distance we watched as he secured these, then using the mass and momentum from the first bundle, both on long lines, he sprang the second bundle off the shore. It was a clever move as it didn’t look like the light boat would have been able to tug the heavy bundle free on horsepower alone. Getting the two bundles off the shore didn’t take much time for this experienced salvor, but it was risky for both boat and captain. And under tow at dusk he still faced the long very slow tow back across the bay and up the river.

Thanks Ted, and other salvors, for getting a few more potential deadheads out of the water!

For more info on log salvage efforts check out wlssc.ca

There are currently 66 permitted salvors working on our coast. In 2015, these salvors recovered about 32,000 cubic metres of logs (over 750 logging trucks worth).

Salvage permits are issued by the Ministry of Forests, Lands, Natural Resource Operations and Rural Development after a criminal background check and other conditions are met. To receive a permit application, you have to contact the ministry in Nanaimo at 250-751-7220. The fee for a log salvage permit is $250 and the permit is valid for one year. Each log salvage permittee (log salvor) is an independent businessperson, responsible for his/her own equipment, supplies, expenses and for keeping their own financial records.

The WLSSC pays a premium of 125 percent of the gross sales price to encourage the salvage of stray logs. In 2018, those incentives to salvors totalled $29,584 on 3,286 deadheads.