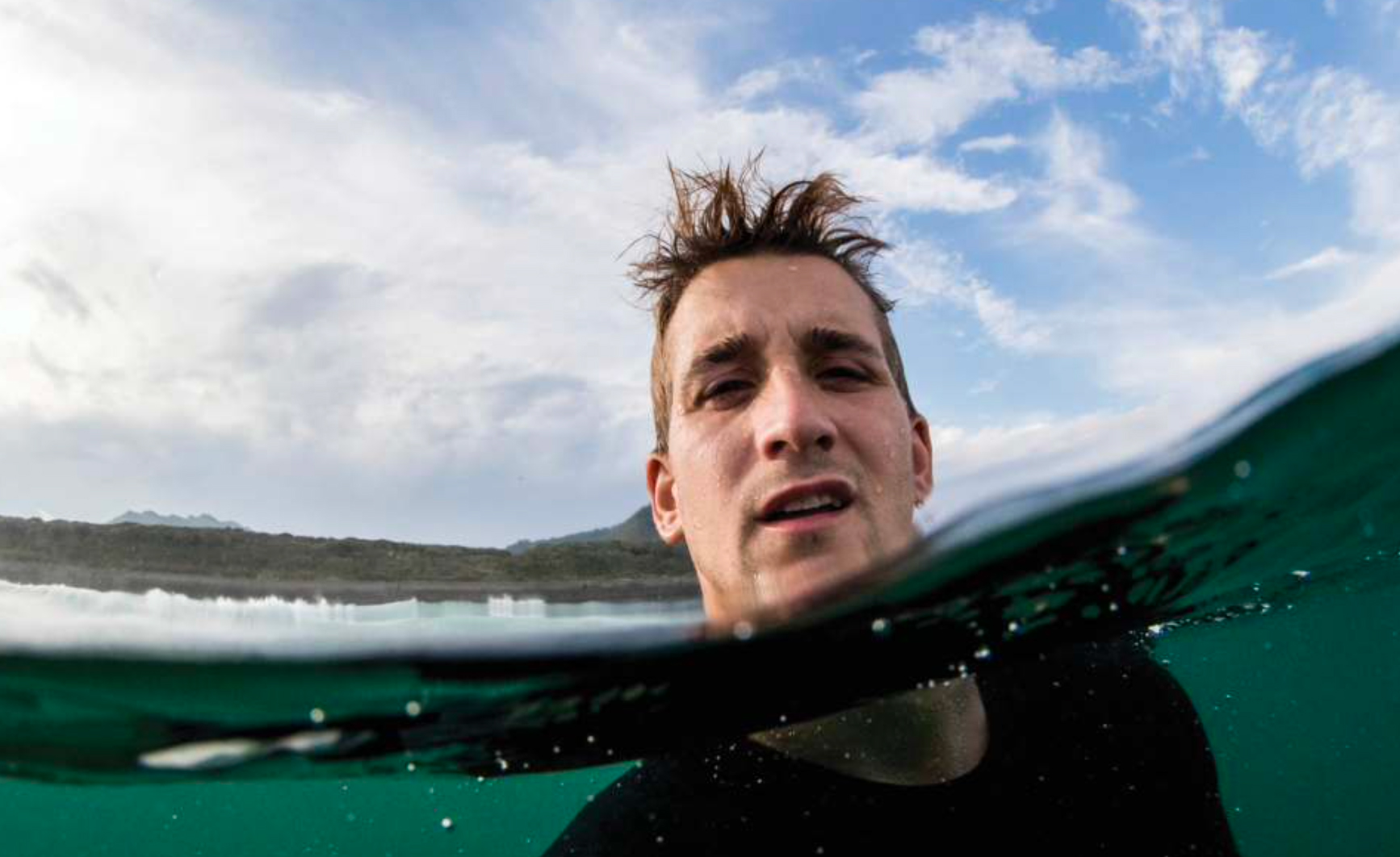 The wave builds ever higher as it approaches Tofino set at the very edge of the continental shelf. The foam-topped wave curves up and inside its blue-green curl, a shape clad from head-to-toe in black neoprene bends his knees and raises his arms to remain upright on his sculpted, white surfboard. A portion of the wave crests and breaks, seeming to bury the surfer in frothy saltwater. But strong and fit, he emerges, flips his direction, rides and swerves on the wave’s face, balancing on the board until the wave dissipates its energy near the beach. A series of camera clicks document his acrobatics.

Marcus Paladino, 31, is a full-time, professional photographer who has specialized in capturing cold-water surfing images. To make sure his camera captures every technical nuance of surfing, he participates in the sport nearly every day. “I surf about four or five times a week which keeps my photography going,” he said during our interview. “I see things while out there. Things like the interplay of water, light, waves, wind, tide, swells, rainbows and the intervals between waves. My knowledge of surfing allows me to document the sport from within.”

Marcus got his start in photography after his godmother, Julianne Lockhart, gave him a point-and-shoot camera while he attended high school in Nanaimo, the city where he grew up. The gift led him to sign up for a photography class figuring it would be an easy A. “I didn’t always do well in school,” he recalled. “My attention span was short and I had lots of energy and enthusiasm.”

Photography allowed him to concentrate on a single subject and the quiet intensity of the dark room focused him. “…working with 35-millimetre film and creating timeless art slowed everything down and gave me a sense of calm,” Marcus wrote in the introduction to his book, Cold Comfort. “It’s as if my godmother knew photography would catch my attention.” He began shooting most days, which included documenting a fight between some high school mates—an action that got Marcus suspended.

After graduation, wondering about what he should do next, he asked for advice from a teacher. Marcus followed that advice: Find what you love to do, then find a way to get paid for it. He enrolled in Courtenay’s North Island College photography program, learning more about the finer craft of shooting photos. He didn’t, however, like his instructors’ expectation that their students would become portrait or wedding photographers. For Marcus, this form of earning a living was just too static and without challenge. His goal was to capture motion—movement in sports, in action, in life.

He moved to Vancouver and got a job in trail maintenance at Cypress Mountain Ski Resort. “That’s where I used my first digital camera,” said Marcus. “I could ski and snowboard as well as photograph the fast, acrobatic snowboarders. The disadvantage of the job was that it shut down in the summer.”

One summer day, he opted to visit Tofino and the Pacific Rim National Park Reserve. This is where he found his passion—surfing and surfing photography. “When I saw those neoprene-clad figures in and on the water, I got on a surfboard myself and took some small group surfing lessons with the basic dos and don’ts,” he said. He also found work at Long Beach Lodge Resort in Tofino, folding sheets and towels in the laundry room and sharing housing with about 25 others in the staff dormitory. The Lodge is sited on Cox Bay Beach, one of the surfer community’s favourite strands. “I grew ever more interested in the motion of surfing,” said Marcus. “Tofino’s surf is prized for its consistent waves, although there are always variations. I started with a Canon 7D Mark II with a focal length zoom lens of 300. Today, my Canon 1D X Mark II uses a lens ranging from 100 to 400, so I can shoot figures even further away. During my lunch hour a roommate who worked as a server at the Lodge would text me saying ‘the eagle has landed.’ I’d nip out to the beach to shoot the professional surfers on the big waves.”

“With those fast moving surfers, do you ever use the automatic settings on your cameras just to catch a shot?” I asked Marcus. “Very rarely,” he said, “it’s always a balancing act between shutter speed, ISO and aperture. I’ve done enough shooting that those settings are almost automatic.”

Surfing has a long history on the Pacific Ocean, dating back millennia. In Polynesia, a 12th century cave painting depicts surfing and shows the sport was part of daily life for the inhabitants of the islands. Polynesian seafarers brought surfing to Hawaii, where the pastime was documented in Captain James Cook’s 1777 journal, later published as A Voyage to the Pacific Ocean. The missionaries and settlers that followed Cook weren’t fond of surfing, thinking it frivolous and a waste of time. The plantation owners wanted the local population to work hard, not play. Surfing never disappeared completely, however, and famed Hawaiian surfer Duke Kahanamoku was one athlete among several that made the sport famous internationally. As surfing popularity grew, the 1959 movie Gidget put it in the mainstream. Competitions grew, documentaries flourished and surfers became professionals instead of beach bums, earning their keep through sponsorships, surf competitions and, eventually, social media influence. Surfing finally became an Olympic sport in 2020.

Marcus repeatedly told me he hadn’t taken up surf photography to make money, but that the sport stimulated his passion for capturing motion with a camera. “Passion, not profit,” he said. But once he sold his first image of Pete Devries, the Tofino-based Canadian surfing champion, he learned there were many avenues to earn a living from surf photography and after a while, he was able to give up the hotel’s laundry room.

He travelled to premier surfing locations around the world, including Mexico, France, Scotland, Japan, Portugal, Hawaii, California and Nova Scotia. He absorbed surf culture, its technical issues and specialized vocabulary.

His work evolved and he shot a short guerilla film. He continually took photos and edited relentlessly. “I work on photography every day,” he said.

The dedication to his craft paid off. He began selling images to European and Australian surfing magazines— photos that caught the eyes of the bread-and-butter companies that specialize in manufacturing and selling surfing-related gear. “Some of these companies sponsor elite surfers and they need photos to market their stars and their gear,” Marcus said. Several companies have paid him a retainer to supply shots for their social media marketing. Through his website, he sells his images pre-framed or ready-for-framing, delivering them on fine art paper or stretched canvas.

The often uttered term, “follow your passion and all will work out,” has become a cliché. But in the case of Marcus, the thought has become reality. And he has done so following his desire to capture motion. “I’ve developed a niche,” he said, smiling. “I live above 1/800th of a second.”