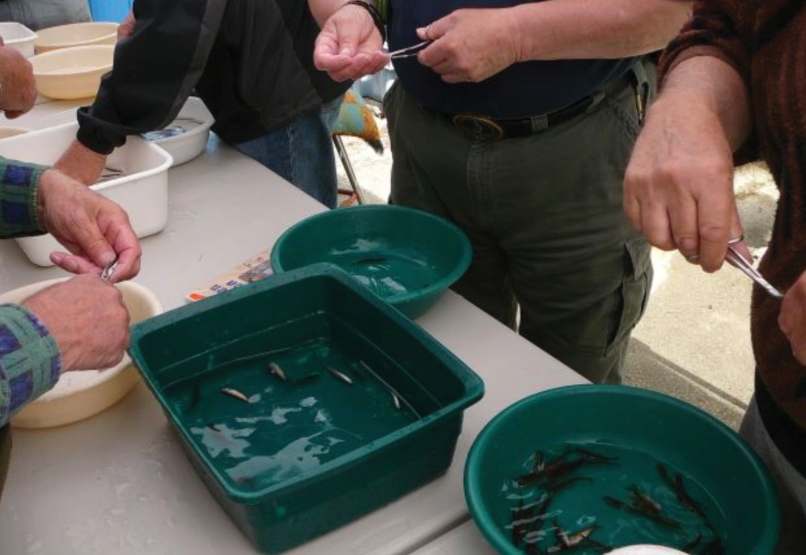 Can this technique save BC salmon?

What Is a Mark Selective Fishery?

Mark selective fisheries (MSF) are becoming more common. In fact, just south of us mark selective fisheries were mandated into law in Washington State about a decade ago, meant to be a tool to improve chinook and coho salmon recovery and to allow important fisheries to sustain themselves during periods of low wild salmon abundances.

This allows anglers, commercial fishers and First Nations fishermen to differentiate a hatchery salmon from an unmarked wild salmon. Hatchery salmon can be retained and wild salmon must be released. In Washington State nearly 100 percent of hatchery produced chinook and coho have their adipose fin clipped, making hatchery fish easy to identify. There are some exceptions for hatchery fish that are used for other purposes, like science, or are too valuable for stock recovery to allow any harvest. These fish do not have an adipose fin clip, but may have a different mark or carry a special tag.

Canada also removes the adipose fin and attaches other special purpose marks including coded wire tags (CWTs). This tag is inserted into a juvenile salmon’s head and is used for stock identification purposes. When adipose clipped salmon are caught by anglers the heads are turned in at CWT recovery depots. Commercially caught adipose clipped salmon heads are collected at processing facilities. The issue is that currently Canada only clips between 10 to 15 percent of hatchery salmon.

During healthy periods of wild chinook and coho stock abundance this low mark rate is not an issue. However, wild chinook and coho escapements have declined in the last two decade, most notably for middle and upper Fraser River stocks. This has led to severe management measures that have closed important fisheries or, in the case of South Coast recreational chinook fisheries, created large and lengthy time based chinook non-retention measures.

The problem is there are substantial abundances of chinook salmon in many fishing areas as a consequence of US and Canadian hatchery production. Most Canadian hatchery chinook cannot be retained because 80 to 90 percent of them do not have a clipped adipose fin, so these unmarked salmon are basically masquerading as wild salmon.

This is the inexplicable conundrum. Canadian anglers can keep hatchery marked coho, but they are not permitted to keep hatchery marked chinook even though in certain areas of southern BC the hatchery mark proportion of the total pool of salmon varies from 40 to 80 percent. Consequently, anglers are now forced to release hatchery chinook, many of which have been paid for by Canadians either directly by the federal Government from taxes, or by money raised from volunteers, businesses and organizations that support salmon recovery.

For example, the South Vancouver Island Anglers Coalition has self-funded a program in Sooke Harbour to rear additional chinook for Southern Resident Killer Whale recovery, to increase angling opportunity and to provide additional chinook for local First Nation’s harvest. In five years, the not-for-profit organization raised $375,000 to sustain the project. Revenues cover the cost of adipose fin clips and CWT implants, feed, transport from the hatchery, hydro and labour charged by the federal hatchery which provides the chinook smolts.

Why Don’t We Have Chinook Mark Selective Fishing?

It is due to politics, agendas, opposition from groups who do not like recreational angling and don’t like hatcheries, and a federal Department of Fisheries that has mastered the art of delaying decision making. Each reason would qualify for a stand-alone opinion piece or article, but for the sake of space considerations here are the significant pros and cons of marked selective fishing.

Anglers are too unskilled to release salmon properly:

The big unknown about the future of salmon, aside from climate warming, is whether all levels of government are finally going to take salmon spawning and rearing habitat protection seriously. To date they deserve an F grade. This failure starts at the top and must be acknowledged, identified and addressed. Habitat loss is the principle reason that evolving hatchery technology and strategies, like MSF, have a vital role to play in salmon recovery.