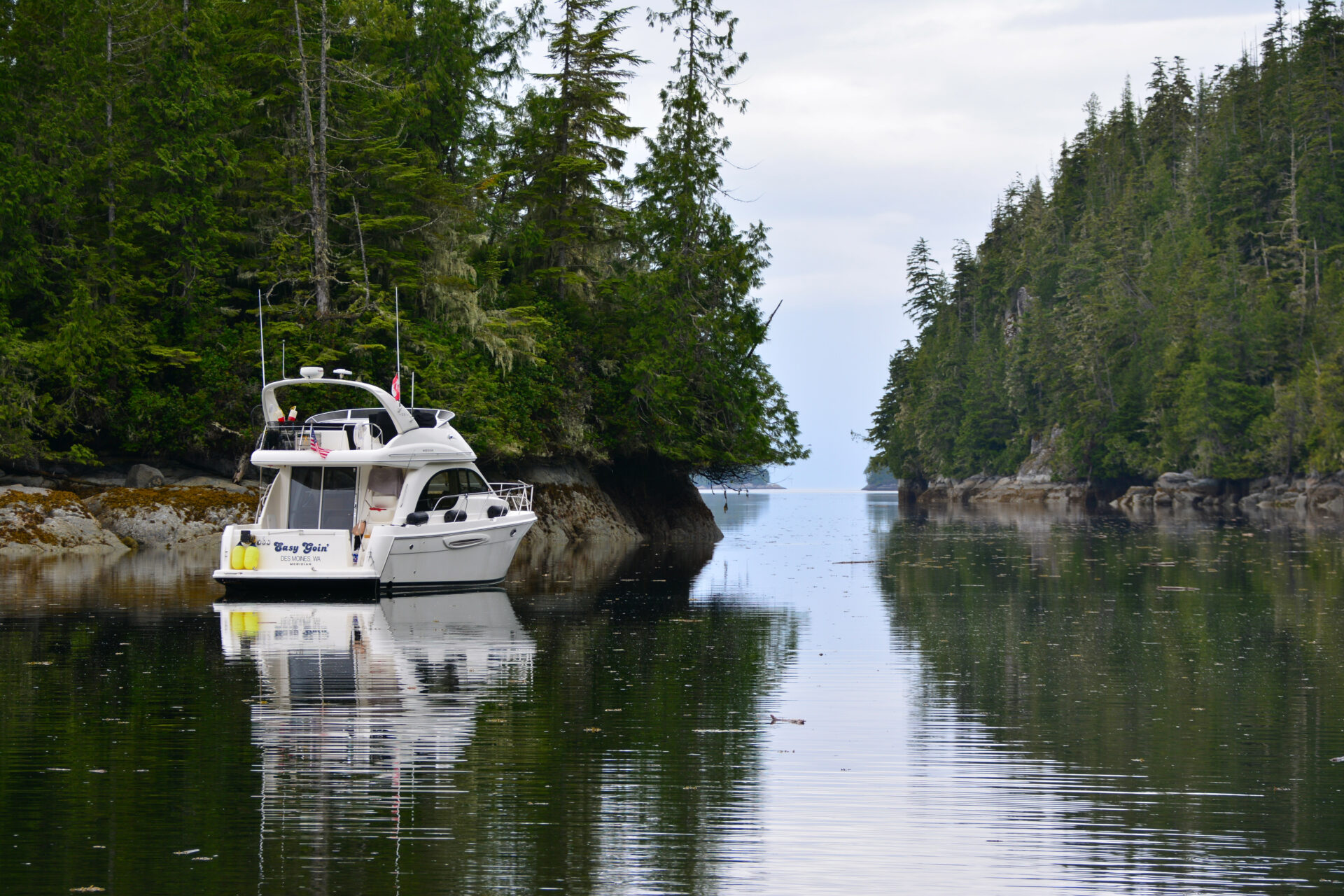 After spending a couple days in Waddington Bay, we weighed anchor and made the short 5.5-mile cruise across Arrow, and up Blunden and Misty passages to Monday Anchorage—located between Tracey and Mars islands. The clouds laid low on the surrounding island’s hillsides and it rained off and on during the passage and the balance of the day, but the inclement weather didn’t dampen our spirits. Rain is expected when cruising the Broughton Islands and British Columbia’s rain coast.

Although, we have visited the Broughton Islands many times in the past, this was our first visit to Monday Anchorage, and we weren’t sure what we would find. Many of the cruising guides stated it was a large and open bay exposed to westerlies and only good as a fair-weather anchorage. After reviewing the chart and listening to the Environment Canada weather report, our plan was to take refuge in the lee of the easternmost unnamed islets at the head of the anchorage to provide protection from any potential westerly breeze.

We entered the anchorage via the clear passage between the small islets. Upon our arrival, we discovered a sailboat tucked in a nook of the islet but there was still plenty of room for Easy Goin’. The anchor set quickly in 26 feet over the thick mud and shell bottom. The location would provide shelter from any westerlies.

A short time later the Kadey-Krogen troller, Golden Dawn, arrived and set a lunch hook west of the charted rocks in the eastern portion of the small anchorage. Both of our neighbours departed a short time later, and we shared the area with the wildlife for the remainder of our visit.

Reportedly, the midden on Tracey Island is one of the largest in the Broughton Archipelago so we launched the dinghy to check it out. This was once the site of a First Nation village. The shell midden was formed over thousands of years of harvesting clams and depositing their shells on the beach. Nearby clam gardens were well tended, with the clam-filled beaches protected by rings of rocks piled along the low-tide perimeter. These gardens often served a dual-purpose during herring season when hemlock boughs were used to trap the fish between the rocks. There are over 300 recorded midden sites in the Broughton Islands.

What we discovered was more than the midden but also a primitive kayaking campsite and very large tide pools where we spent more than an hour examining the captured sea life.

Back in the dinghy we motored east up the narrowing and drying passage between Tracey and Mars islands. We could smell smoke as we entered the passage. About halfway up the passage, on Tracey Island, we came upon a pair of kayakers who had set up camp and were trying to dry their gear.

Another potential anchorage nearby that we have never visited is Sunday Harbour. Since the weather was settled and it wasn’t raining, we decided to run the dinghy the 2.5 miles and check it out. Making our way west in Monday Anchorage, we passed south of Marsden Island, between a group of four islets and Mars Island, then continued north of Morrow Island before entering the shallow east entrance of Sunday Harbour. This entrance is only 140 metres wide, with a charted depth of 13 feet and a rock in the middle that is exposed at low water. The anchorage is a half-mile long, 400 metres wide and appeared to be exposed to westerlies blowing in from Queen Charlotte Strait. There is no place to obtain relief if the wind was to blow so I don’t believe we will be overnight anchoring in Sunday Harbour. The short dinghy exploration was well worth the time though and after returning to Easy Goin’, notations were recorded in the ship’s log. 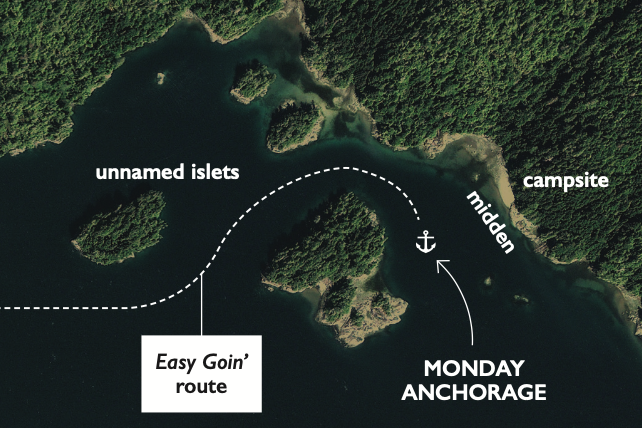 Happy hour and dinner were a special occasion; today marked the end of our sixth week of the three-month float plan. For our celebration dinner it was stuffed pork tenderloin, baby potatoes, glazed carrots and onions all prepared on the barbecue. Dinner was paired with gin martinis.

It rained overnight and we woke to the sun poking through broken clouds. With the morning’s low tide and sunshine, the anchorage’s appearance had changed. The low tide exposed even more of the midden and a couple new sights. The charted rocks at the eastern end of the anchorage and a tombolo extending between Tracey Island and one of the islets to the north were now exposed. During breakfast Arlene spotted a raccoon family foraging down at the waterline.

We parted Monday Anchorage at mid-morning and as we exited a pod of white-sided dolphins approached Easy Goin’ to play in her wake, as if to say goodbye.