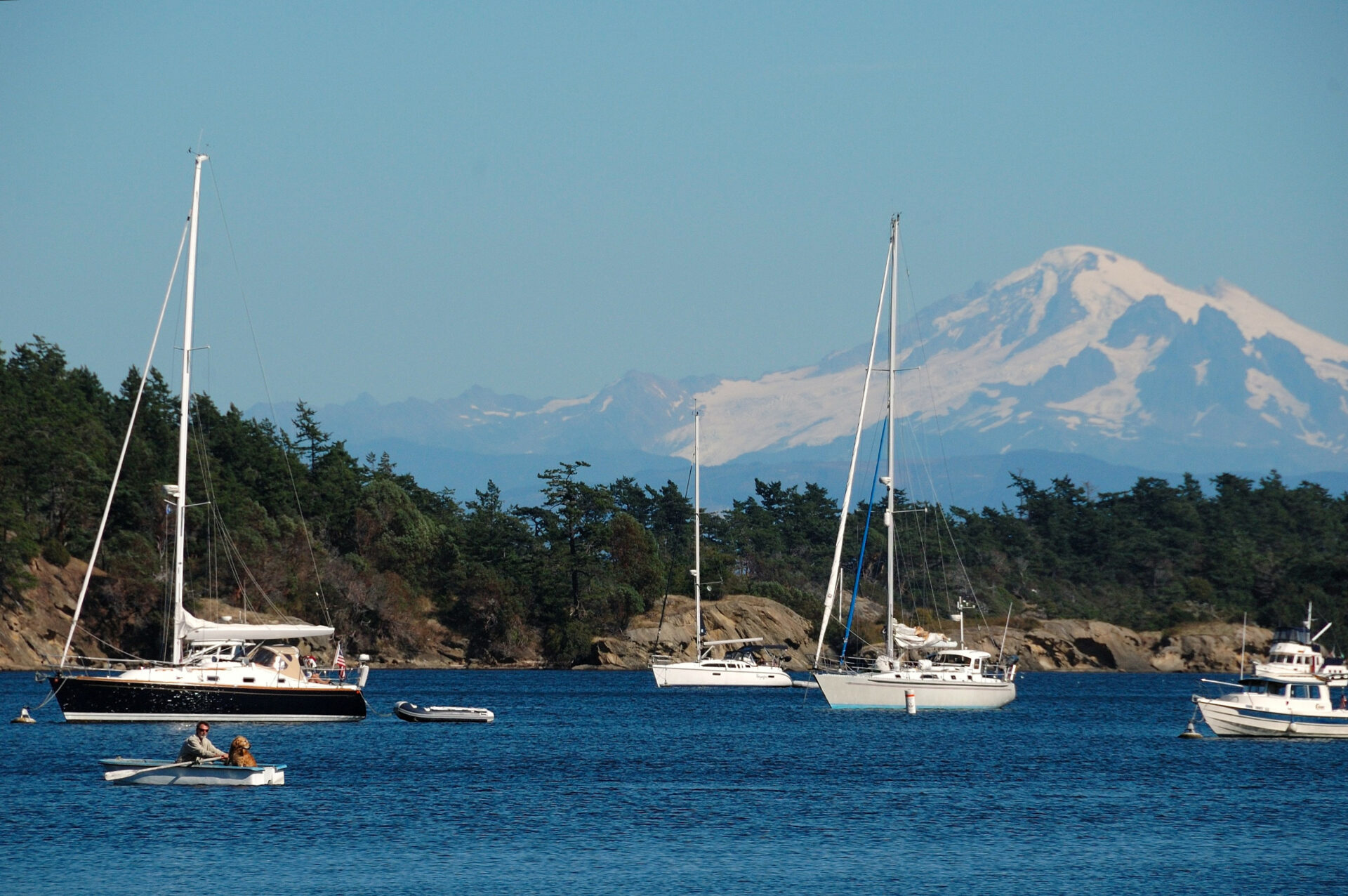 Can you tie up? Can you drop your own? Everything you need to know about mooring buoys in BC

Question: “With so many mooring buoys in our bays, many of them unoccupied, what are the rules around tying up to them? And what rights do people have to drop them in the first place?”

In many popular local bays such as Maple Bay, Silva Bay and Comox, private mooring buoys are so numerous and densely placed that it is very difficult for transient boaters to safely anchor. There are two parts to your question:

Canadian law has not yet identified a specific right to moor. However, there is a common law right to navigation on navigable waters, and that right to navigation includes a right to anchor. However, that right to anchor is only for a reasonable time and for a reasonable purpose. That was established in 2015 when BC’s highest court adopted the wording of a lower court decision regarding anchoring:

The provincial court decision also noted that both the right to navigation and the included right to anchor must be exercised without interfering with the equal rights of others.

So much for anchoring.

Many vessel owners are unaware of the distinction, believing that the right of navigation lets them legally moor their vessel for both short and long periods of time. That interpretation is incorrect. In 2013, the BC Supreme Court stated that long-term moorage, particularly at times when the owner is not actually on board the vessel (even during weekdays, much less over an entire boating season) is not part of the public right of navigation.

Given that long-term or permanent mooring is not part of the public right of navigation, a boater requires the permission of the owner of the seabed (normally, the owner is the provincial government) to place a long-term mooring buoy on the sea floor. Without such permission, the buoy is technically trespassing.

Regulation and use of private mooring buoys involves both the federal and provincial governments (and, potentially, a local government or harbour authority).

The federal government regulates mooring under the Canadian Navigable Waters Act and the Private Buoy Regulations, through Transport Canada. Private buoys must be installed to stay in position and may not interfere with or even be likely to interfere with the navigation of any vessel. The regulation sets out requirements for the colour, shape, size and markings for each buoy, as well as the responsibilities of the person placing them. Transport Canada can remove any mooring buoy that is not in compliance, presumably including those that clutter popular anchorages. In practice, however, Transport Canada will rarely respond to complaints about mooring unless the vessel or buoy impedes commercial vessel traffic or is a significant risk to general vessel traffic.

The federal government owns the water, but the province owns the land under the “inland seas” (such as the Juan de Fuca Strait, Strait of Georgia, Johnstone Strait and Queen Charlotte Strait) and bays, as well as the foreshore between low and high tide. As the landowner, the province can regulate the construction, placement and use of private moorage facilities on that Crown land, including Crown land underwater. BC’s Land Act makes it an offence of trespass to occupy or use the seabed without authority. That means that individuals cannot build or construct private moorage facilities on the foreshores or seabed without a lease or specific permission from the Ministry of Forests, Lands, Natural Resource Operations and Rural Development. There is no such thing as “squatter’s rights” in BC, so a private mooring buoy installed without provincial approval will be in trespass.

So far, so good. However, here’s the wrinkle; the province will not issue foreshore leases or licences to occupy for private mooring buoys; by policy, it will only accept an application where an applicant is intending to make a “substantial investment.”

To summarize, the federal law lets any person place a mooring buoy as long as it won’t interfere with navigation or confuse a boater, is securely anchored and is properly labelled. However, that falls short of actually authorizing such placement; all it does is set some requirements to avoid having one’s mooring buoy removed by the federal Ministry of Transport. A legally placed and labelled buoy is still in trespass on the provincial sea bottom if it does not have a permit or lease from the provincial government, but the province does not issue those for private mooring buoys. That means that the province is unlikely to charge someone who installs a private mooring buoy with trespass, although it could do so.

Can You Tie to a Private Buoy?

On the one hand, there is no established right to long-term mooring, either in statute or under the common law right to navigation. A private mooring buoy, if left for an extended or indefinite time, is unfairly depriving other boaters of use of common public property. The province doesn’t issue authorizations for such buoys, so private mooring buoys are trespassing (even if the province doesn’t choose to prosecute those trespassers).

On the other hand, a private mooring buoy is the personal property of an individual, and another boater attaching to it is trespassing to that person’s personal property. It would probably not make any difference that the buoy is also trespassing on Crown seabed; it is wrong to trespass even if you trespass on a trespasser.

Recognizing that a mooring buoy is trespassing and that a boater tying to that buoy is also trespassing, is there anything in law to prevent a boater using a private mooring buoy overnight or from anchoring adjacent to such a buoy? Legally, no there is not. But there are a couple of significant considerations.

First, liability. You have no idea about the owner’s maintenance of the buoy, so, what if you tie to a private mooring buoy and it lets go? The owner of the buoy could theoretically be held liable for any resulting damages, but that is very unlikely if the boater is trespassing on the mooring buoy.

Second, dealing with a frustrated and angry owner of the buoy. An overnight tie-up may be overlooked, but if a boater leaves his or her vessel there for some time, that is not only very rude, but also risky. The frustrated owner of the buoy could untie your boat, tow it (carefully, to avoid any damage) to the nearest dock and leave it there, apparently abandoned. That passes the problem to the dock owner, but that owner can simply report it to the Canadian Coast Guard, the single federal point of contact for reports of problem vessels.

What if you anchor among a mass of private mooring buoys? Given that anchoring for a short term is a right under navigation, you have more right to use that seafloor than the trespassing owner of the mooring buoy. However, there is some risk of tangling your anchor rode with the lines securing adjacent mooring buoys.

If a bay is cluttered with already-anchored vessels and private mooring buoys to the extent that there is no reasonably safe anchorage left, the best course of action is probably to select an accessible buoy and phone the owner (a private buoy must display the name and telephone number of its owner) to politely ask to use their buoy for one night. If permission is refused, you have several choices:

Local Expert: Ben is a retired lawyer/forester/biologist who owned a Nonsuch sailboat for several years, before discovering it is much more fun (and much less expensive) to crew with boating friends. He is currently crewing on a 36-foot wooden Grand Banks for a two-month cruise of the wet, wild west coast of BC.