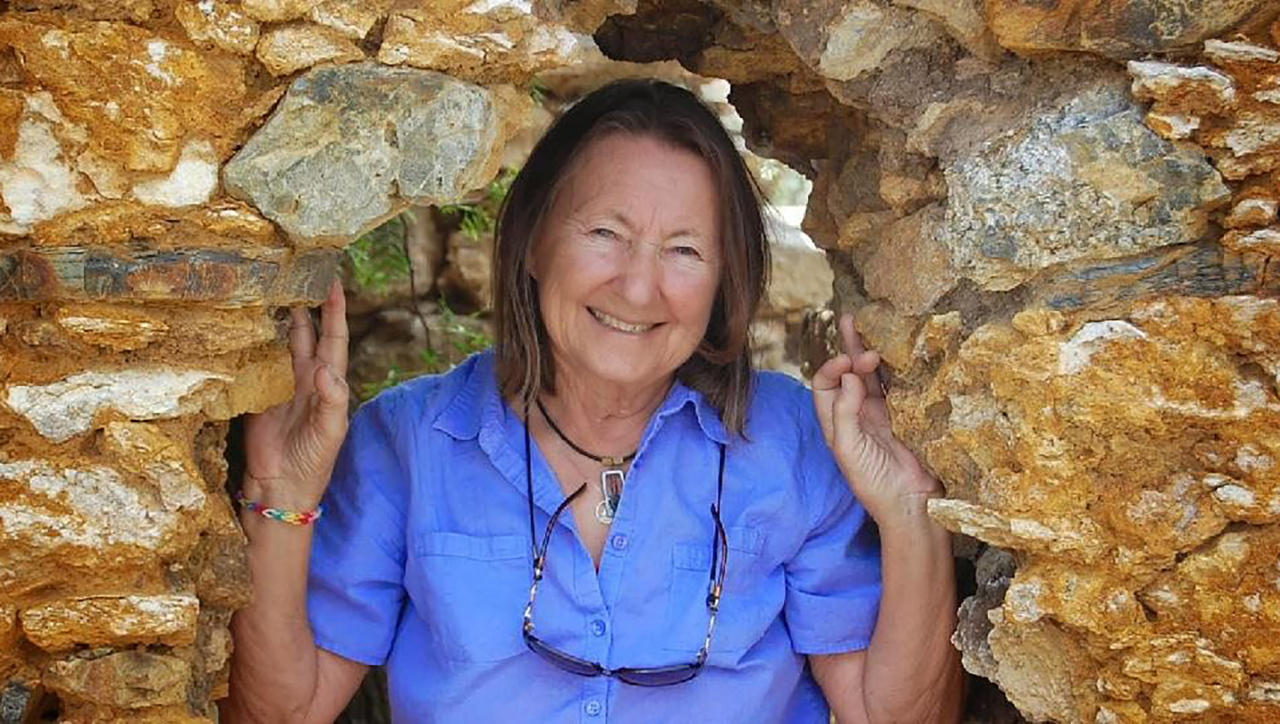 Motivations and Advice from a Bluewater Sailor

I met up with her one sunny August morning while Nereida was on the hard at the Canoe Cove boatyard. Jeanne was working bare-footed on her foredeck in preparation for the taking down of her mast and installation of new rigging and lifelines. It was a bit of a shock to see a skipper, who in the last few years has sailed two and a half times around the world, appear so ordinary, belying their fame, just as if they were here for an annual haul out after some local cruising.

I climbed up a workyard ladder and stepped aboard the boat. I doubt I have ever set foot on a sturdier, well-found boat: a Swedish built Najad 380. Everything about it, fittings and design, above and below deck are born of practicality. Nothing is superficial. There is a purpose to everything. And there certainly is nothing superficial about Jeanne Socrates. There is a purpose to everything she does too and now her overriding purpose is to prepare for yet another solo round the world non-stop voyage in Nereida. 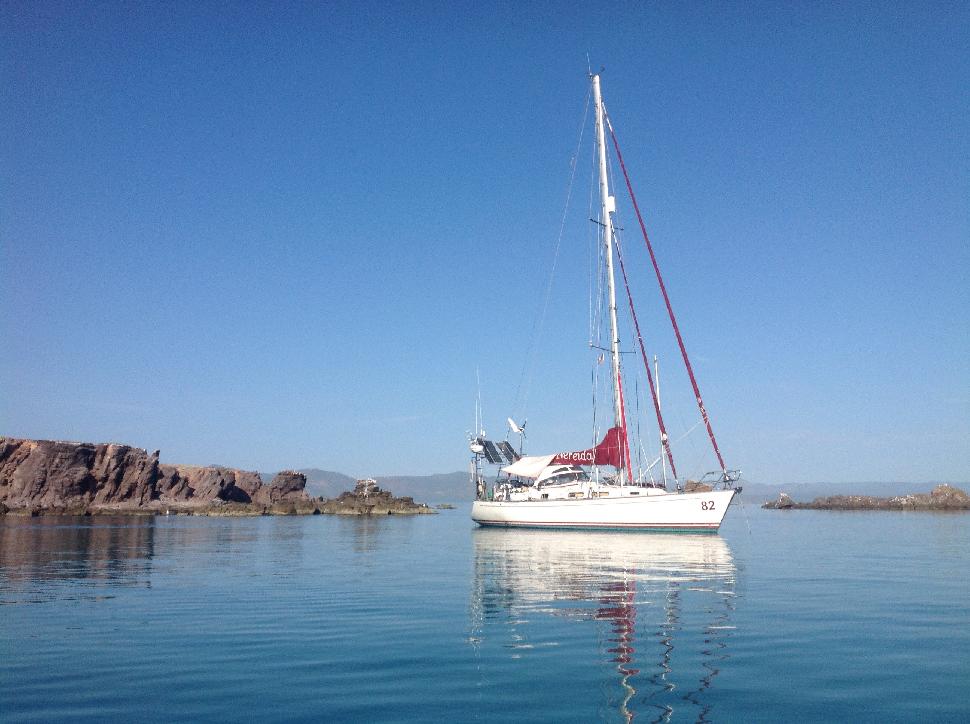 Jeanne joined me in the cockpit and I asked her what she had been doing in the past three years, since her last epic voyage.

“Mostly I have been in Mexico with a few odd trips back to the UK. Having been around (the world) there were so many things that needed attention. The two most important things for me to get done were the “coppercoating” of the hull and the fabrication of a hard dodger. Unfortunately while I was there I broke my collarbone when an ATV I was riding fell over on top of me, but it’s OK now. See I can raise my arm high and I only have a small bump to show for it.”

Trials and Tribulations  The need for a hard dodger, became apparent when, in Jan 2011, she was knocked down whilst hove-to west of Cape Horn. Her blog describes the nightmare: “Suddenly, near 14:30 while I was fortunately leaning against a wall in the head, all hell let loose and everything that could move was relocated to the port side of the boat…water was pouring in from under the sliding hatch and there was chaos everywhere. Slowly we righted…I could not budge the hatch open. I had to climb out the aft cabin hatch to access the cockpit… the boom was broken in half and the canopy, dodger was missing along with its framework.”

A hard dodger was the answer. Now it’s in place and Jeanne is contemplating. “I need to add extra fastenings. It’s got to stay in place if Nereida tips over.” She discusses her terrifying Cape Horn experience. “ I was hove-to, as I had been taught to do, but I was beam on to a breaking sea and it must have been a breaking wave that pushed me over. Now I have changed tactics. In extreme weather, I drop all sails and stream my drogue. You can’t pitch-pole like that.”

She was very fortunate not to be injured in that maelstrom of boat and sea. It’s ironic that she was very nearly paralyzed on her one and only ATV outing.

Motivations  Then came the obvious question. “Why, when you have successfully completed the Everest of sailing voyages, do you want to do it again?” She does not hesitate in answering. “Partly because of the Southern Ocean. It’s a very special place. You’re at one with nature. You have to respect it. I feel privileged to be there. I get emotional thinking about it.” This powerful emotional memory seemed to momentarily cause transcendence, as if she had suddenly taken off to that “special place.” Her bright eyes watered. For me, that reaction was a telling moment, giving me, so early in our meeting, a glimpse into the very essence of why she does what she does.

“The Southern Ocean is addictive. Once you’ve sailed in it on your own, thousands of miles from anywhere with only the albatross for company, you can’t wait to return. It’s just an amazing feeling. You can’t really understand the Southern Ocean without being there.” I asked her if, somehow, those amazing feelings were accompanied by moments of spiritual insights. “I don’t regard myself as a very spiritual person. I think it is just wonderful to be there, to be at one with nature. You have the albatross hanging there. That big bird looking at you eye to eye. A fantastic feeling.” Then, as if to change focus, she continues, “I make a note of which birds I see and where and report to an e-birding website. Another reason I want to sail off again, is because I haven’t been sailing for so long.” She smiles. “Besides, I have friends who told me that if I were do it again, I would be the oldest person ever to do so. That’s motivation.”

As with the nature of the vicissitudes of intense experiences, the highs stand out only in contrast to the lows. Jeanne has had some big lows. After her Cape Horn ordeal, she was then forced to spend an agonizingly long nine weeks in Ushaia, Argentina, trying to repair her boat and waiting for spare parts to arrive. Her entry for February 19, 2011 reads: “Very disturbed sleep overnight—big spring tide and winds well up to 30 knots pushing us against fixed jetty… still having problems with Chile agent… Patience, patience…’

Dealing with Adversity  I asked Jeanne how she dealt with such adversity. “I just don’t let things get me down too easily. If things get really bad, you just have to survive the moment. Nothing lasts forever; everything passes. When I know storms are coming, I don’t like the waiting. They come, but they pass. I sometimes talk to people about the ability to deal with the moment, but often it’s just like water off a duck’s back.” I think Jeanne’s ability to cope in extreme situations is a tremendous testament to her inner fortitude.

“Life is precious—make the most of it,” she volunteers. “It’s what I believe. My husband, George, took early retirement and we sailed offshore together, but we only had five years. He died of cancer in March 2003. If we hadn’t got away sailing he would have had nothing. He was cheated, really. That’s why I say that.” Certainly Jeanne is a shining example of her maxim.

Curious about her adventurous spirit, Jeanne tells me, “Well, growing up we did not have much money, so I did not do much. I did cycle around Switzerland and as a family we would sometimes go off to different parts of England and to Greece in our camper van. My father, who died in the Second World War, just before I was born was from Sydney, Australia, so I’m half Australian. Perhaps I have some of his adventurous spirit. His name was John Faulkner.” Then I learned how it was she was named with a French Christian name. “My mother’s mother was called Anne and my father was John, so putting those names together I became Jeanne.”

Nutrition  This master mariner looks so fit and healthy, an obvious prerequisite for a possible nine months alone at sea. Does she follow a special diet or have an exercise regime?

“I don’t do anything really. I refuse to age. I never say that I’m getting old. I don’t have the strength of a big man, but I have a copper tube for extra grip and a special rubber mallet. I think aging is a mental thing. If you stop, your body stops. I have all my provisions stored away, just for a few tins of meat. It was really hard trying to get long-life milk. I do have a special breakfast every morning that I have made up. It’s a cereal that includes dried blueberries, pumpkin seeds, almonds, cranberries and sunflower seeds. I give myself treats too. I like marzipan chocolates and dark chocolate and olives. And I carry a little alcohol. You have to give Neptune a tipple when you cross the equator.”

What else keeps her going? The majority of time at sea is spent below dealing with the myriad of things that need to be seen to. Jeanne is a superb communicator, blogging daily and making radio contact with friends. Her website is a journalist’s dream. For relaxation, “I like to listen to all good music. I have my iPod. Favourites of mine are Bach’s Violin Concertos and the music of Mozart. I used to listen to him a lot when I was studying at University.” (Jeanne got her degree in nuclear physics in 1963). “I really like Gordon Lightfoot. I love singing. I got very upset when the BBC World Service, for budget reasons, stopped broadcasting its Christmas carol service to South America. And I love the sea novels of Patrick O’Brian. I have all 13 below. I read them twice!”

Tips  And advice from the recipient of the Blue Water Medal, one of the highest accolades of sailing prowess, to those thinking of sailing offshore? “Make sure you are prepared and don’t spend too long doing it. Prepare the basics, the rest you can do as you go along and make sure you have a sturdy boat. I met up with people in the Transpac race and realized the importance of a staysail. When I oversaw the construction of Nereida, I had an inner forestay fitted and the boat was adapted inside to make it strong. In the Southern Ocean, I only use the main and the staysail. And I’m not a fan of a furling main.”

I look at my watch as the sun starts to shine on Jeanne. My precious hour is up. We shake hands. I put on my shoes, go down the ladder, back to earth.

Now Jeanne is on the high seas living her precious life. You can see exactly what she is up to and follow her adventures at svnereida.com.