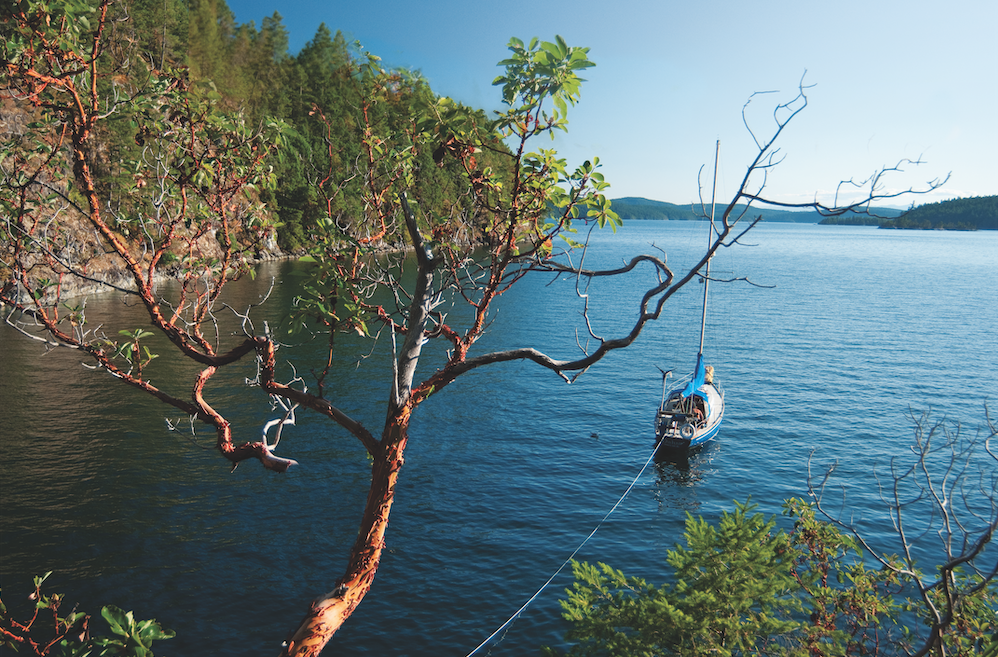 Some experts are saying that catenary has less impact on holding power than you might think. Here's why

Every boater knows that in polite company, it is best not to discuss politics, religion, or anchors. But rode is fair game. After all, you will be hard-pressed to find a boater who doesn’t advocate attaching a length of chain to the anchor. Right? Are we all in agreement?

But Why?  Well, chain offers chafe resistance where the rode is likely to come in contact with coral or rock. Chain fits nicely on the windlass. But I think many folks will cite a reason that makes sense for all situations, even for boats without a windlass that anchor mostly in mud: chain adds weight to the rode, and this weight near the anchor serves to keep the pull on the shank low. After all, Beth Leonard wrote in The Voyager’s Handbook, “The weight of the chain keeps the pull on the anchor parallel to the bottom, making it more difficult for the forces of wind and tide to trip the anchor.” From this, the progression is logical: the more weight, the better.

The Theory  After more than 30 years and 100,000 miles cruising, New Zealander Peter Smith says no. Last year Peter (who co-designed the Rocna anchor with his son, Craig) published a compelling argument that the catenary effect disappears when most needed and should therefore be ignored as a consideration when selecting anchor rode.

Peter doesn’t dispute the value of keeping the pull on an anchor shank as close to parallel with the sea bed as possible—that’s how anchors are designed. But Peter argues that the catenary effect is not the best means to achieve this, only scope is.

Citing data and mathematical models from Frenchman Alain Fraysse and Rocna Anchors of Canada, Smith argues that in moderate conditions (wind speed of about 20 knots) in which the pull on the rode is not great enough to eliminate catenary (not enough force to pull the rode taut), a set anchor is not at risk of dragging. And when conditions (wind speed of about 50 knots) exacerbate forces to the point where the rode is pulled taut and catenary is nearly gone, the angle of pull on the set anchor is primarily determined by scope—the weight of the rode is no longer a factor in the anchor’s ability to remain set.

“While catenary disappears, geometry cannot be argued with; for a constant depth, a longer rode means a lower maximum possible angle of pull on the anchor,” writes Smith. According to his argument, the catenary effect is both effective and superfluous up to the point it disappears. 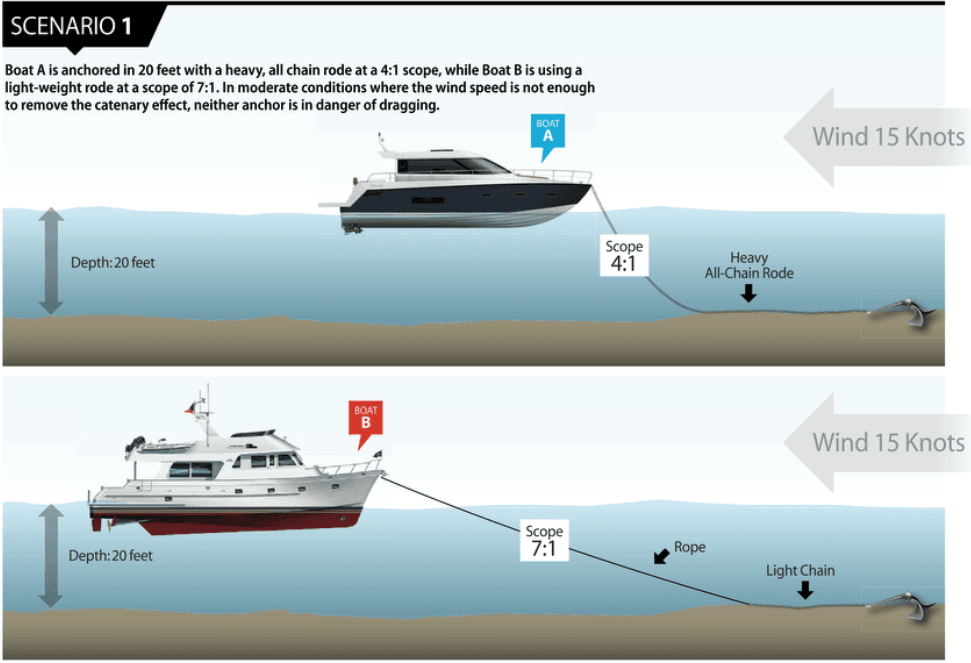 In Practice  Two adherents to this approach are life-long cruisers and authors Steve and Linda Dashew. At the bow of the couple’s 83-foot, 50-ton Wind Horse is 3/8-inch chain attached to a 250-pound anchor. That’s the same weight/diameter chain we use aboard our 40-foot, 12-ton Del Viento, and with an anchor that is just over one-quarter the size! (Of course, the Dashews use G7 chain, which has a much higher working load limit than our G3 chain—see sidebar).

Acknowledging that heavy chain rode is useless for increasing the holding power of a set anchor when the catenary effect is nearly eliminated, I asked Peter and Craig Smith about the role of the catenary effect in setting an anchor. Wouldn’t eliminating weight close to the shank make it harder to set an anchor in the first place?

They responded, citing anchor tests. “A modern anchor of adequate size will quickly offer resistance force as it begins to set. In testing we routinely see the test line chain leader being mostly straightened before the anchor is even half set. The amount of force required to fully set [an anchor] is well over the forces catenary contributes.”

Even discounting any benefits of the catenary effect, others will claim that heavy chain lying on the seabed produces friction that can serve to limit anchor re-sets in conditions where moderate winds are expected to shift. This may be one benefit of a heavy all-chain rode, but this alone might not justify the otherwise unnecessary weight. 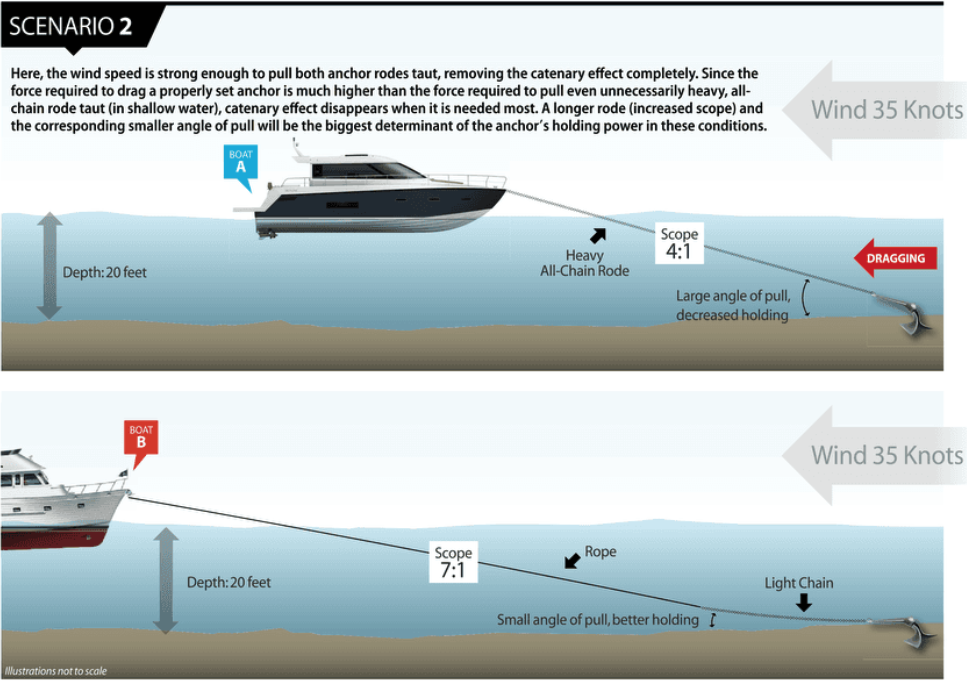 The Exception  So are there any conditions for which it makes sense to carry heavier rode to induce a catenary effect? What about the Pacific Northwest, where anchorages often offer challenges that include deep water, fast-changing weather, and strong tidal currents?

It turns out that deep water is a special case.

The models Peter Smith uses in his technical article are based on depths (from the seabed to the roller) of about 25 feet. He readily concedes that in the case of an all-chain rode—and only in the case of an all-chain rode—the role of the catenary effect in deeper anchorages is greater (and the role in shallower depths is lesser). This is because while all of the other forces remain constant, as the depth increases, the weight of the vertical column of chain increases with depth and can be significantly greater when anchored in 85 feet of water, for example. To understand this, imagine you and your friend each holding the ends of a length of chain. If that length of chain is only six feet, it will be easy for you both to pull it straight. If that length of chain is 85 feet…you get the idea.

Accordingly, boaters with enough all-chain rode to deploy adequate scope in 100-feet of water may never see the wind speeds necessary to reduce the catenary effect to the point where it doesn’t play a role. In this case, heavier chain than needed—in terms of working load—may serve you well. Perhaps that is what John Rousmaniere meant when he wrote in 1983 about anchoring, in the first edition of his The Annapolis Book of Seamanship, “While it won’t stretch, a chain rode is so heavy that it will take a hurricane to straighten it out.”

Making the Switch  Of course, boaters who have long anchored successfully on ground tackle that is bought and paid for (including the gypsy), may not have much incentive to make an expensive, wholesale change. In fact, Peter Smith outfitted his Kiwi Roa back in the 1990s with both a windlass and a 300-foot length of heavy chain at each end (bow and stern)—and still uses the set up today. Despite being a proponent for a contrary approach, it is cost that keeps him from changing.

But for boaters in B.C. and the Pacific Northwest who aren’t anchoring in excessively deep water, and who are considering the switch to a lighter rode based on Peter’s thesis, the process is as simple as securely attaching a very long, light-as-possible rode to your anchor. Because most of us use chain to resist chafe on rocky bottoms and to allow us to use a windlass, in most cases this means swapping out the chain we currently use with a smaller-diameter (lighter), but higher-grade chain.

For example, aboard Del Viento, we carry 300 feet of 3/8-inch G3 chain attached to our primary anchor. At 145 pounds for every hundred feet of this chain, we sail around with 435 pounds of rode in our anchor locker (and that’s just for the primary!). Our heavy rode has a working load limit of 2,650 pounds.

Now, accepting Peter’s thesis and rejecting the heavy chain for heavy chain’s sake, we can instead carry 300 feet of ¼-inch G7 chain attached to our primary anchor. At 74 pounds for every hundred feet, we’d shed 213 pounds! And get this: we’d enjoy the security of a working load limit that is more than 17 percent higher (3,150 pounds).

But remember to first consider your windlass gypsy, which may or may not fit a smaller chain. Also consider that the less chain you carry, the less benefit you’ll realize stepping up a grade (or two) and down a chain size (or two). And for boats that currently use only a boat’s length or so of chain, for chafe protection, there may be no point in making any change—your rode is already very light.

Just like no two cruising boats are alike and no two anchorages are alike, no two ground tackle approaches are the same. Most cruisers swear by the anchor and approach that has worked for them and allows them to sleep at night. But for those unsettled on a ground tackle solution or approaching the problem anew, it may make sense to reconsider the anchor rode, to rethink using heavy chain for the sake of inducing the catenary effect.

And if you decide you can shed some pounds in the form of lighter or less chain, you may reduce pitching motion and improve sailing performance and fuel economy. Anchors aweigh! 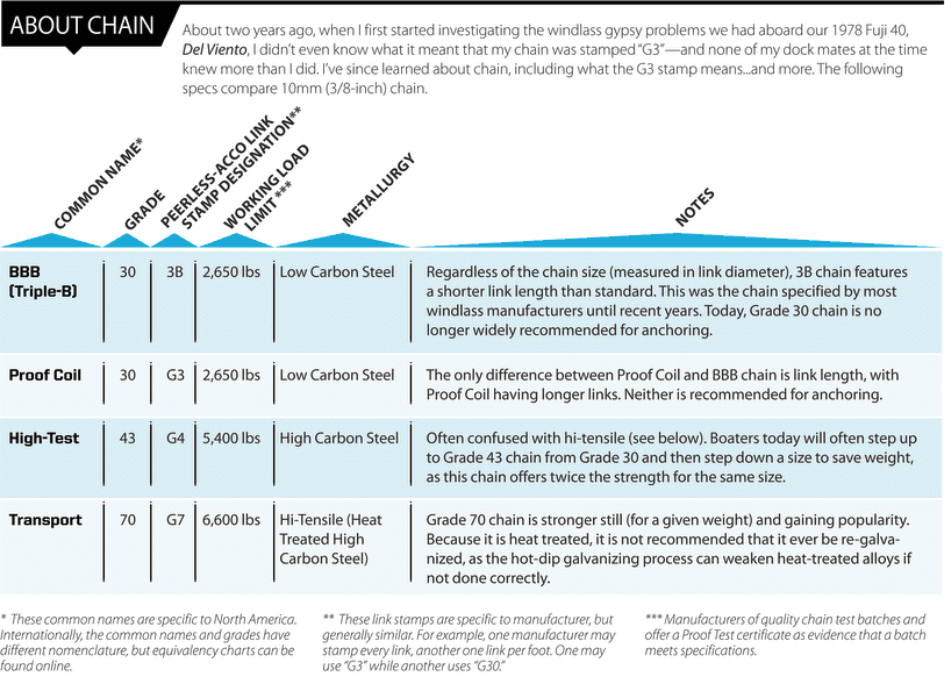