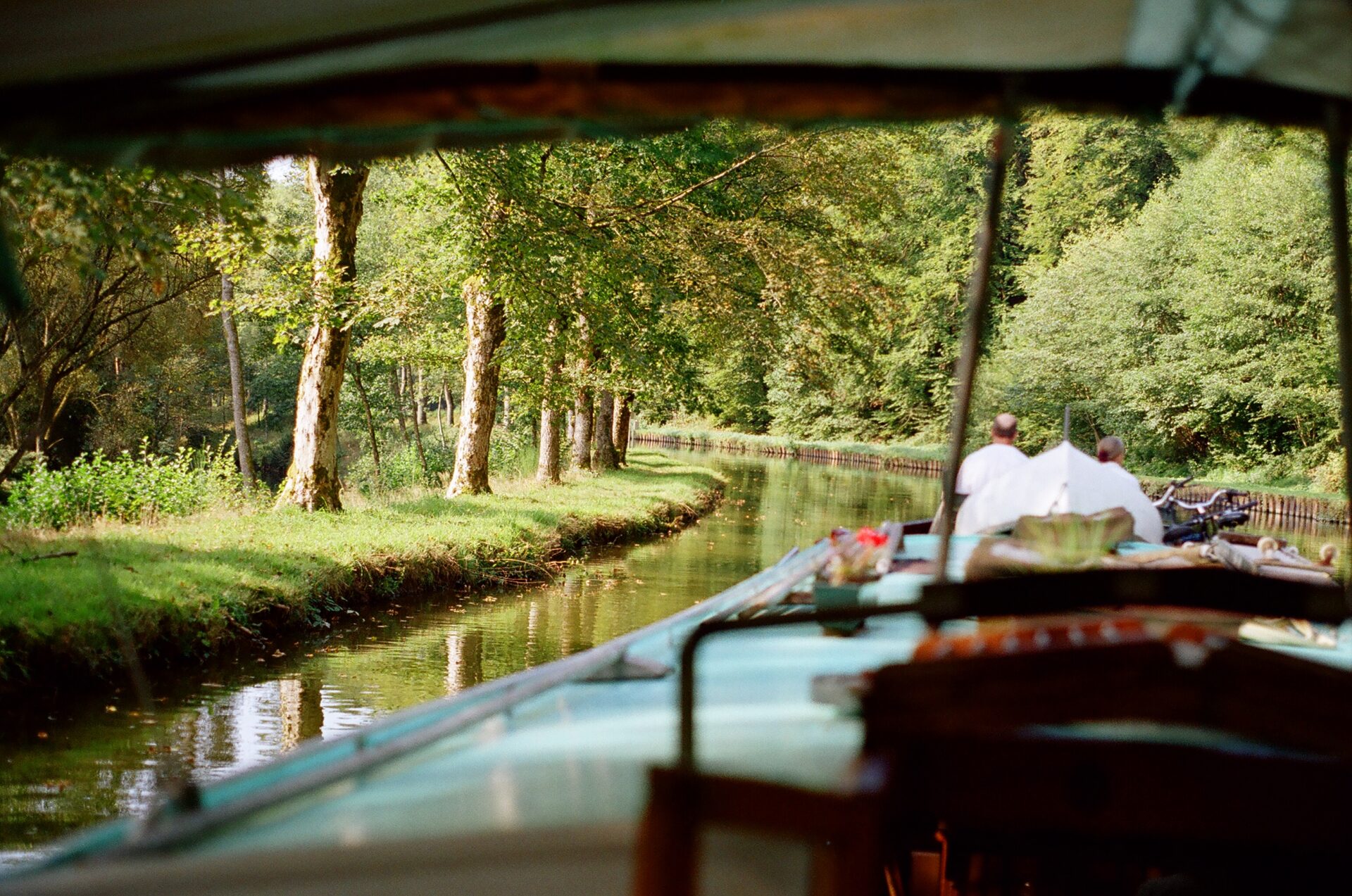 With almost 8,000 kilometres of navigable rivers and canals, over 1,000 locks, countless tunnels (one at a whopping 5,670 metres is possibly the longest canal tunnel in the world), 18th century aqueducts and tree-line towpaths, the waterways of France are an unrivaled inland cruising ground. Run by one indomitable bureaucracy, the VNF or Voies Navigables de France, locks are opened and closed, water levels controlled, canal banks repaired and “barrages” or spillways carefully monitored with remarkable efficiency. Providing, of course, you realize that everything in France, especially on the water, proceeds at a dignified, if leisurely pace.

Linquenda  My wife, Margaret, and I spent the better half of one summer and fall travelling the French canals at a stately three knots aboard the 20-metre Dutch sailing barge, Linquenda. Owned by Pacific Yachting’s former cruising editor, Bill Wolferstan and his wife Clementien, Linquenda had started life as a commercial vessel but in the 1960s she had been sympathetically converted to a comfortable live-aboard and for the past 15 years has been the Wolferstan’s cruising home. When they announced that they were taking a break and needed someone to run their “barge and breakfast” enterprise, escorting paying guests from just outside Paris, east through Alsace Lorraine and south to St. Jean de Losne, the barge capital of France, we leapt at the chance. After a few days of instruction on barge-handling, engine maintenance and the idiosyncrasies of the VNF, Bill courageously left us in charge of his beloved Linquenda.

“Do the lock keepers expect a tip?” I had asked Bill during my introduction to the arcane world of barge skippers.

“Yes and no,” replied Bill helpfully. “Strictly speaking you don’t have to tip them, but if one keeper has been working several locks for you throughout the day it’s polite to give him a bottle of wine.” He showed me where he kept a healthy stash of bottles, displaying labels with gold embossings and etchings of ancient chateaus.

“Impressive, eh?” he said with a conspiratorial wink. “One euro nineteen each. Help yourself!”

I had heard a story about a frightful lady lock keeper, forearms the size of Popeye’s, who always had difficulty with lock gates until a bottle of vin ordinaire was produced, so I was relieved to know the Wolferstans had left us with some “petty cash,” so to speak, in the event of such emergencies.

Champagne Country  Starting out in champagne country, we were rewarded by vineyards covering gently sloping hills to the waters edge, quaint towns, and the occasional glimpse of a magnificent chateau viewed through the trees and well-tended gardens. These vineyards are in the most northern of France’s wine-producing regions and cover about 27,000 hectares of undulating chalky soil. Despite the enthusiastic consumption of wine by the general populace, let alone lock keepers, it is still hard to imagine where all this fermented grape juice ends up since the production of champagne alone exceed 180 million bottles each year.

In the town of Epernay, where we stopped for lunch, we were told that champagne companies such as Moët et Chandon, Pol Roger, Mercier and de Castellance boast an estimated 322 kilometres or more of cellars and tunnels, vast vaults cut into the chalk rock under the streets, shops and houses. For a fee one can take a tour of these caves and sample some of the produce at one of the champagne “houses,” but having propane tanks to exchange at a nearby super marché and other chores to attend to, we had to be content at the end of the day with a bottle of “lock keepers vintage.”

Alsace-Lorraine  East of Champagne Ardenne, we entered Alsace-Lorraine and tackled the impressive Canal de la Marne au Rhin, an engineering feat that linked the Marne River with the mighty Rhine at Strasbourg on the German border. Though we encountered little pleasure craft traffic until Toule, the canal offers a vital link for the 350-ton commercial barges, or péniches, run usually by a man and wife team, and hauling anything from dried apricots to gravel and scrap iron.

Since many of the hand-operated locks were being converted to automatic, our progress slowed down a bit as VNF employees removed tools and re-fastened vital pieces of equipment preparatory to opening the gates on what, to all appearances, was a little-travelled waterway. But the countryside—rolling hills and vineyards giving way to fertile fields of grain or occupied by contented cows and horses—remained intriguing, and by now we had learned to take things easy.

A Leisurely Pace and Amiable People  “Monsieur, I am leaving for lunch,” our respective lock keepers would announce as noon approached, and we would find a comfortable spot along the bank, under the shade of the plane trees, and drive in a couple of steel stakes to which Linquenda’s bow and stern lines were soon made fast. Bridge operators, café proprietors, supermarket employees, butchers, bakers and candle-stick makers, all closed down for lunch and once we adjusted to the rhythm it became a remarkably sensible notion. After the statutory break, replete with baguette and cheese and with the ubiquitous French cigarette dangling from his nether lip, our lock keeper would return with a cheery wave and, where the gates were winched open by hand, one of us would jump ashore to help.

After Nancy, the hub of commerce and politics in Lorraine and a serenely beautiful city with a history, cuisine and architecture all its own, we turned south toward Burgundy. Without guests for a few days, Margaret and I tackled an awe-inspiring flight of 15 locks in the space of three or four kilometres on our own, but despite Linquenda’s rather generous proportions and her tendency to become a little excitable in a strong wind, we managed fine except for one fender that stayed behind as we exited a lock.

Realizing that this particular fender was Bill’s pride and joy (the only inflatable among an assortment of humble car tires) I shouted at the lock keeper and gesticulated in the direction of our rapidly receding equipment. We were surprised, several kilometres later, to arrive at the next lock and have the fender returned to us by the keeper, grinning widely. It was time to part with another bottle with an impressive label.

The End of the Line  By the end of September we had reached St. Jean de Losne, home to hundreds of commercial and ex-commercial barges, rental boats, English narrow boats, Dutch barges, hotel barges, private craft and assorted flotsam and jetsam. It is here, that several important canal links converge: the route we’d travelled; the Canal de Bourgogne (linking the Seine); the Canal du Rhône au Rhin (travelling east to Germany and Switzerland) and just south via the River Saône, the Canal du Centre (another route to Paris).

The leaves were turning on the trees and some of the rivers were becoming swollen and unmanageable with the autumn rains. A couple of days’ travel on the Canal du Centre and we arrived at a little harbour designated by the Wolferstans as Linquenda’s winter home.

“I have a long list here,” I informed the boatyard proprietor, “that Bill wants done on the boat.” Though an expatriate Brit, our host had developed a refined, Gallic sensibility after living for 18 years in France.

“Lots of chaps want things done,” he sniffed. “Never pays to be in too much of a hurry.”

And mindful of a recent case of a French police lieutenant promoted to captain despite spending 12 of the last 15 years on “paternity leave,” in the course of which he wrote three books about the Beatles, I kept my mouth shut.