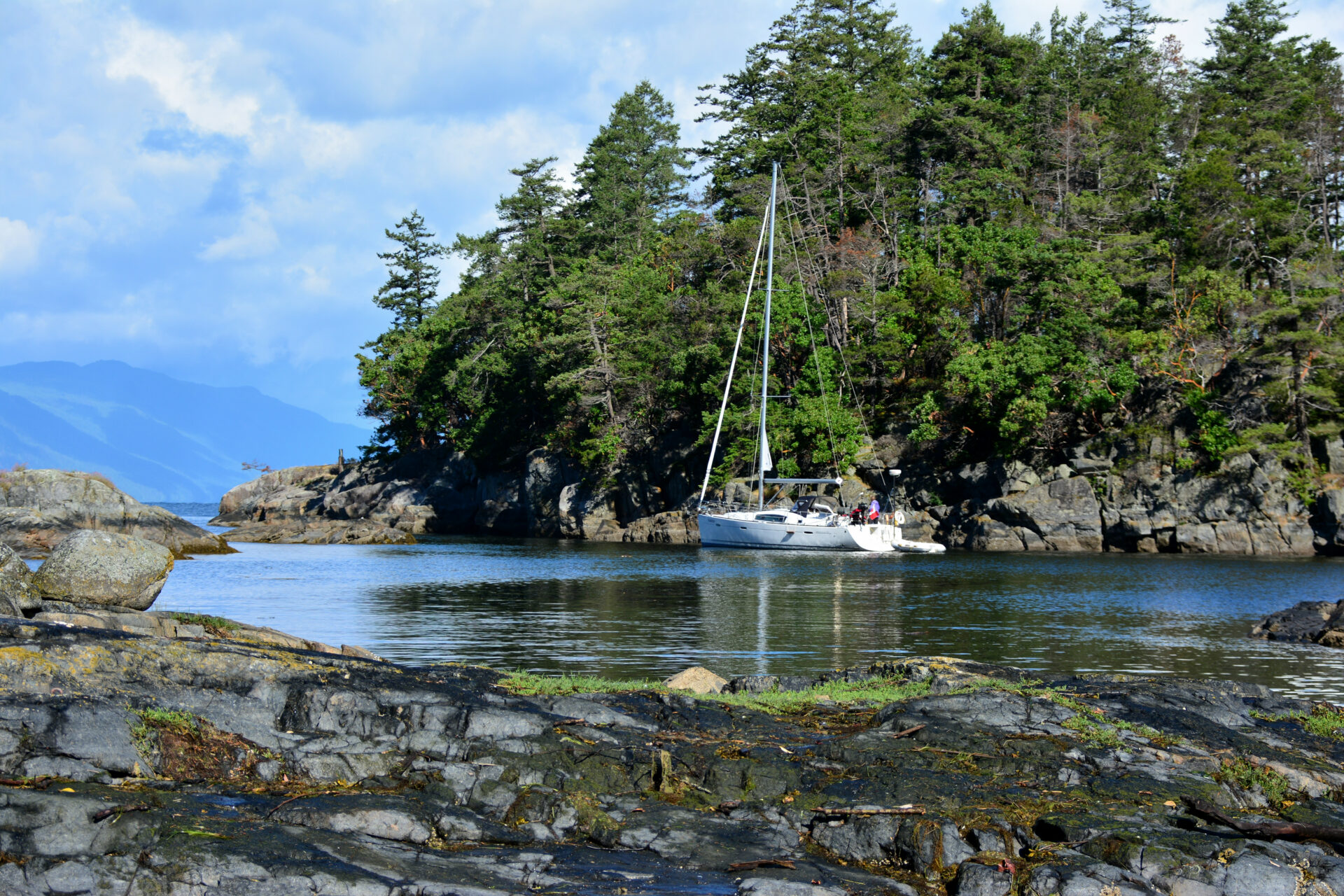 Well worth the wait

Completing our third week of a three-month cruise through the Gulf Islands, up the Sunshine Coast and eventually to the Broughtons, we departed False Creek in the morning and set a course for Smugglers Cove Provincial Park, 36 miles up the coast. For years we had heard stories about the cove’s history and how beautiful this all-weather anchorage was. The cove and surrounding 457 acres of forest located on the south side of Sechelt Peninsula is a portion of the BC Provincial Parks system. It is said the park is the most popular on the Sunshine Coast with its maze of rock faces, sand flats, rocky nooks and mini bays, with three anchoring basins.

We have transited the area many times on our way to and from Desolation Sound and beyond. On several occasions, we poked our bow in the popular park but on each visit, there were a fair collection of boats, so we never dropped the hook.

This time it was early June, so the decision was to check the cove once again. Perhaps it would be less busy considering it was still technically “shoulder season.” We guided Easy Goin’ through the narrow, 15-metre (50-foot) entrance between a shoal patch with three feet of water, 150 feet off the south entrance point, and two drying rooks 30 metres (100 feet) off Capri Isle. The cove was nearly void of boats, so it was an easy decision to stay and experience all that the anchorage had to offer. Movement through the cove was at dead slow speed with an eye on the depth sounder due to the irregular bottom with rocks and shoals hiding below the surface. The hook was set in the second basin in a depth of 10 feet over a mud bottom with fair holding, and we ran a stern line ashore to one of the park’s 38 stern-tie anchors in the rocky shoreline.

A heron perched in the top of a tree surveying the anchorage periodically let out a call to tell us that this was their home and we were only visitors.

The cove is ripe for dinghy or kayak exploration with its maze of basins, drying lagoons and islets awaiting discovery. These backwater shorelines are covered with some of the largest Pacific oysters I’ve ever seen. Although harvesting them is prohibited from May 31 to September 30 because bivalves in the area are unsafe for human consumption due to possible contamination or paralytic shellfish poison.

Note that the small cabin on France Islet has “private” signs around it. When the cove was transferred to the parks in 1971 an arrangement was made whereby the owners could continue to enjoy lifetime occupancy.

The park offers two kilometres of hiking trails with lots of variety. The trailhead is located on the southern shore of the most eastern basin, and there are interpretive signs along the trail making the walk even more interesting.

Smugglers Cove is filled with myth and intrigue. A sign at the trailhead states, “At the first sign o’ trouble I’ll toss ye overboard and ye’ll sink like a rock to the bottom of the sea.” This was the policy of Larry Kelly, an ex-Royal Navy seaman who used Smuggler Cove’s tranquil waters to collect cargoes of Chinese Labourers. The labourers, recently unemployed with the completion of the Canada Pacific Railway (1885) paid “private” Kelly $100 each to smuggle them into the United States in hopes of work.”

To add to the intrigue the sign goes on to say, “During prohibition (1920 to 1933) Smuggler Cove was used as a safe haven by rum runners. They used ships, to transport Texada Island alcohol to thirsty destinations in the United States.” All fueling the legend and imagination of what may have taken place in the cove.

From the trailhead, hikers have their choice of direction. Heading east, a boardwalk took us through the forest and marshland to a parking lot for visitors arriving by vehicle. Along the way we saw waterfowl nesting and bald eagles perched in the trees. Heading northwest from the trailhead, the trail follows the cove’s shoreline ending with a loop and spectacular ocean views. Hikers can explore the extensive rocky shoreline, lagoons and tidal pools filled with aquatic life, a few small sandy beaches or sit on one of the large bare rocks and absorb the warmth of the sun.

The following morning, we woke to an overcast sky and the threat of rain, but it didn’t dampen our spirits. Sitting on the back deck enjoying our morning cup of java, we watched two bald eagles building a nest in a Douglas fir at the cove’s edge.

As we departed the cove to continue our journey north, we agreed our first visit was time well spent and pledged to return as soon as possible.