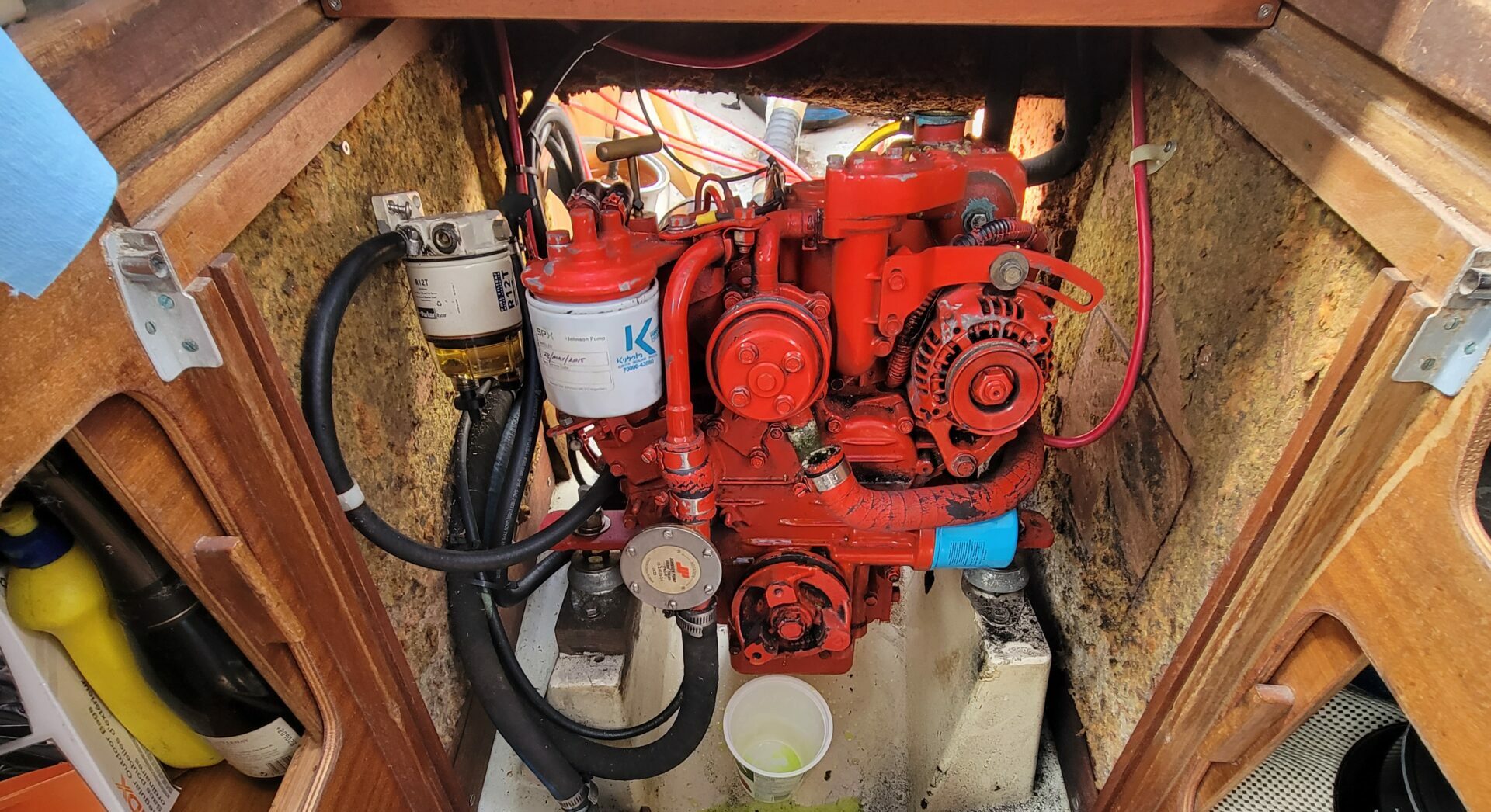 Recommissioning, sometimes called “summerizing” (in contrast to “winterizing”), is the essential second stage to the two-part process of laying-up a vessel. The work should be simple and straightforward, if necessary tasks were completed during the fall lay-up. If not, now is the time for essential inspections and maintenance tasks (such as oil change and impeller inspection), before engine problems spoil idyllic days on the water.

Having a detailed Maintenance Log greatly simplifies getting re-acquainted with the diesel system after months of lay-up. It should include: jobs done, items disassembled (such as raw water pump), tasks yet to be completed, and items removed from the boat. A log is simple and easy to keep; don’t trust to memory for information on which the engine depends. Four columns (date, item, notes, follow-up) on a double page spread in a plain notebook work well.

– Inspect the engine for signs of rust, leaks, or fallen debris (such as insulation).

– Inspect the bilge for oil, fuel, coolant or water. Locate the source. 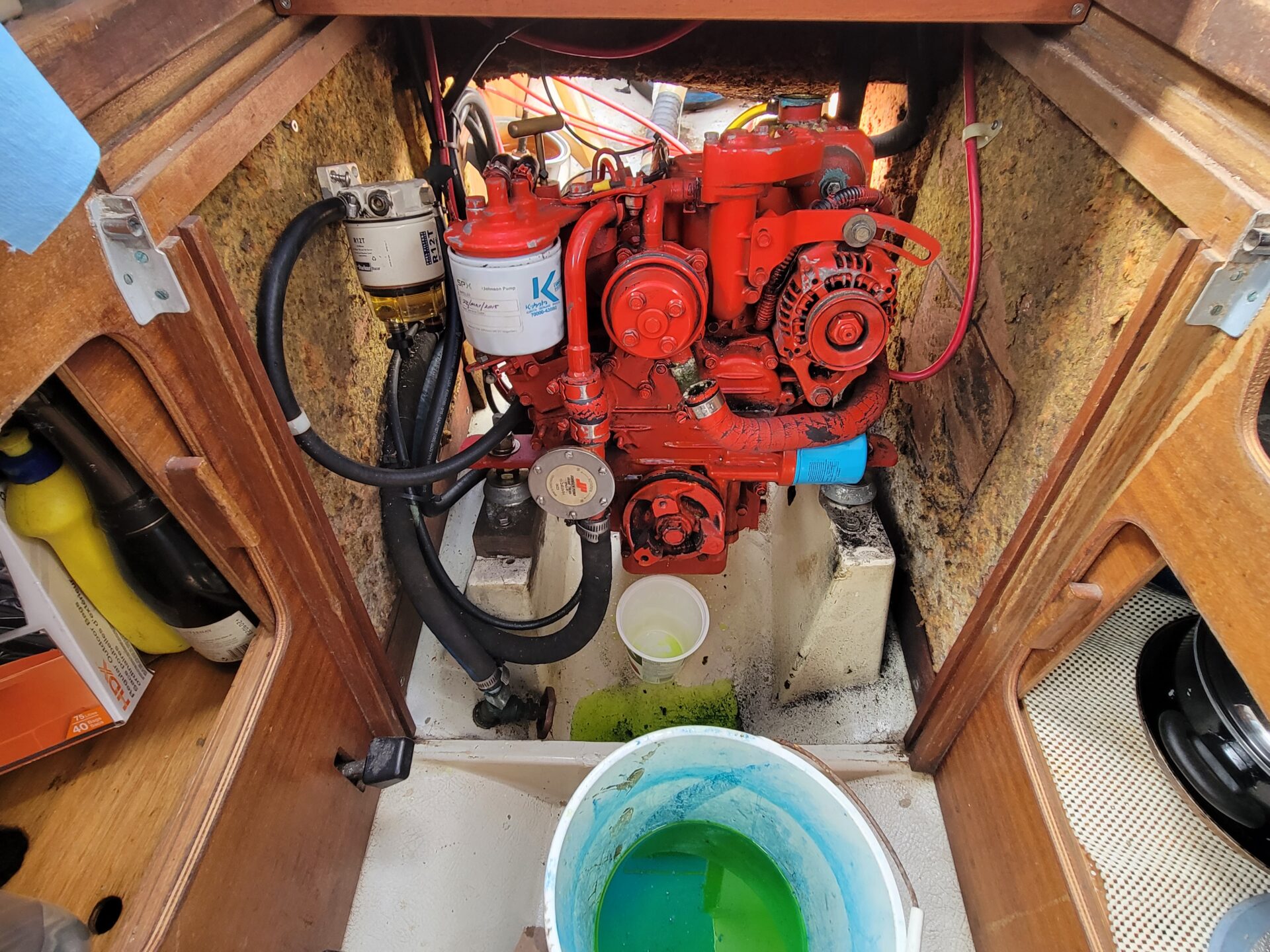 Diesel engines need scrupulously clean fuel. Any sediment or water in the fuel will have settled out during lay-up, so it’s worthwhile draining a sample from the bottom of the fuel tank, if this is possible. Growth of HUM (bacteria, fungi and yeasts) is generally not a problem in colder climates.

Fuel filters should be new. Best practice is to change the primary (off engine) filter every year in the fall and the secondary filter at least every second year, using 10-micron and two-micron elements respectively. Any water still in the bottom of the primary filter should be drained before start-up.

– Drain any sediments and water from the bottom of the tank, if possible.

– Use a new primary fuel filter (and second filter every second year).

– Check all hose clamps in the fuel circuit.

– Open fuel valves, including any valve in the fuel return line from engine.

Don’t start a new season with old oil in the engine. Changing the oil and filter removes corrosive acids, which attack the inside of the engine, and helps prevent carbon sludge blocking small oil passages. If this vital task was not done during lay-up, oil and filter should be changed before the new season.

Best practice is also to change the ATF in the transmission each year. Additives break down over time and the transmission works hard so this is cheap insurance. The ATF certainly should be changed if there has been any evidence of overheating (darkening of the fluid).

– Check the level of transmission fluid.

– Rotate the engine manually or use the starter for a couple of seconds only without starting—this will help lubricate bearings before start-up.

The raw water impeller will need to be re-installed in the raw water pump housing. A little dishwashing liquid on the vanes make it easier to twist and insert the impeller without cutting or nicking the rubber.

If the impeller was not removed during lay-up, some of the vanes will be permanently bent (“taking a set”). The pump will still function but likely will be less efficient.

Galvanic corrosion (between dissimilar metals that are electrically connected by water, or coolant/antifreeze) continues even during lay-up. So all anodes should be rechecked and replaced if about 50 percent consumed. This includes the anode on the propeller shaft, if the vessel was laid-up in the water.

– Check that all seacocks open and close easily. If a seacock is frozen open or cannot be serviced or replaced, it should, at least, be equipped with a wooden plug in case the hose fails. (Best practice at all times).

– Reassemble the syphon break, which was flushed in fresh water to remove any scale or salt crystals. Take care to re-assemble correctly.

– Reconnect the exhaust manifold, wet exhaust hose, and raw water hose into the exhaust riser, if any of these were disconnected.

– Close the drain on the water-lift muffler.

– Open the wet exhaust thru hull, if this was sealed to prevent rodents entering the vessel.

The fluid should be changed every two years, preferably during lay-up, before precipitates have a chance to block small cooling passages in the engine block.

– Check the level of coolant/antifreeze in the head tank or overflow bottle. If lower, find out why.

– Re-install the air filter, if this was removed for cleaning.

– Open all air intakes to the engine room and check that they are clear of any winter insulation.

A fully charged battery may still have reduced capacity due to sulphation during lay-up (hardening of sulphates on the battery plates). This happens if the battery was not kept full charged. Best practice is to load test a battery if you have any doubt about its condition and ability to start the engine throughout the coming season. A load tester puts a load (often 10 amps) on a fully charged battery and measures the voltage. If the voltage falls quickly or too far (below 10 volts), the battery probably needs replacing. The same basic test can be made by measuring the battery voltage while cranking the engine. (Make certain the engine cannot start while cranking).

– Inspect battery and battery box for any signs of swelling, cracking or spilled battery acid.

– Reconnect battery terminals. Best practice is no more than four terminals to a battery post. Avoid wing nuts as these are prone to vibrating loose.

– Switch bilge pump to auto and lift the arm on the float switch to activate and check the pump.

An engine is only as good as its drive train, which has to be secure and aligned. With the transmission in neutral, the propeller shaft should turn easily and smoothly. (Aligning the engine should not be necessary, provided no work was done on the drive train or engine mounts, or if the shaft is stiff to turn.)

Out of the Water

– Inspect the strut and cutlass bearing and change the bearing if loose or damaged.

– Check that the control cables (throttle, gear and stop) are securely attached.

– Some dripless lip seal stern glands need to be greased each year—see manual.

Several items should be checked before and immediately after engine start. A checklist may be helpful at the start of the boating season, to ensure nothing is missed.

– Raw water strainer may need to be primed, if above the waterline.

– Check raw water is flowing from exhaust. If not, strainer may be airlocked. Unscrew the top slowly to allow water to flow up from the seacock, then retighten.

– Loosen packing in a traditional stuffing box, if this was tightened. Adjust until the box drips approximately once every 10 seconds and not at all when the shaft is still.

– Dripless stern gland must be “burped” to remove trapped air from the bellows if there is no air vent (small open-ended hose coming from the bellows to above the heeled waterline. Trapped air will cause the seal to overheat and fail.

– Before leaving the dock, verify that the vessel responds to all movement of engine controls (forward, aft, neutral, throttle and engine stop).

Dennison Berwick is author of Marine Diesel Basics 1, Maintenance, Lay-up, Winter Protection, Tropical Storage, Spring Recommission. The book is the first visual guide to marine diesel systems on recreational vessels. He will be presenting a one-day workshop at LadySail in Gibsons on May 12th. ladysail.com