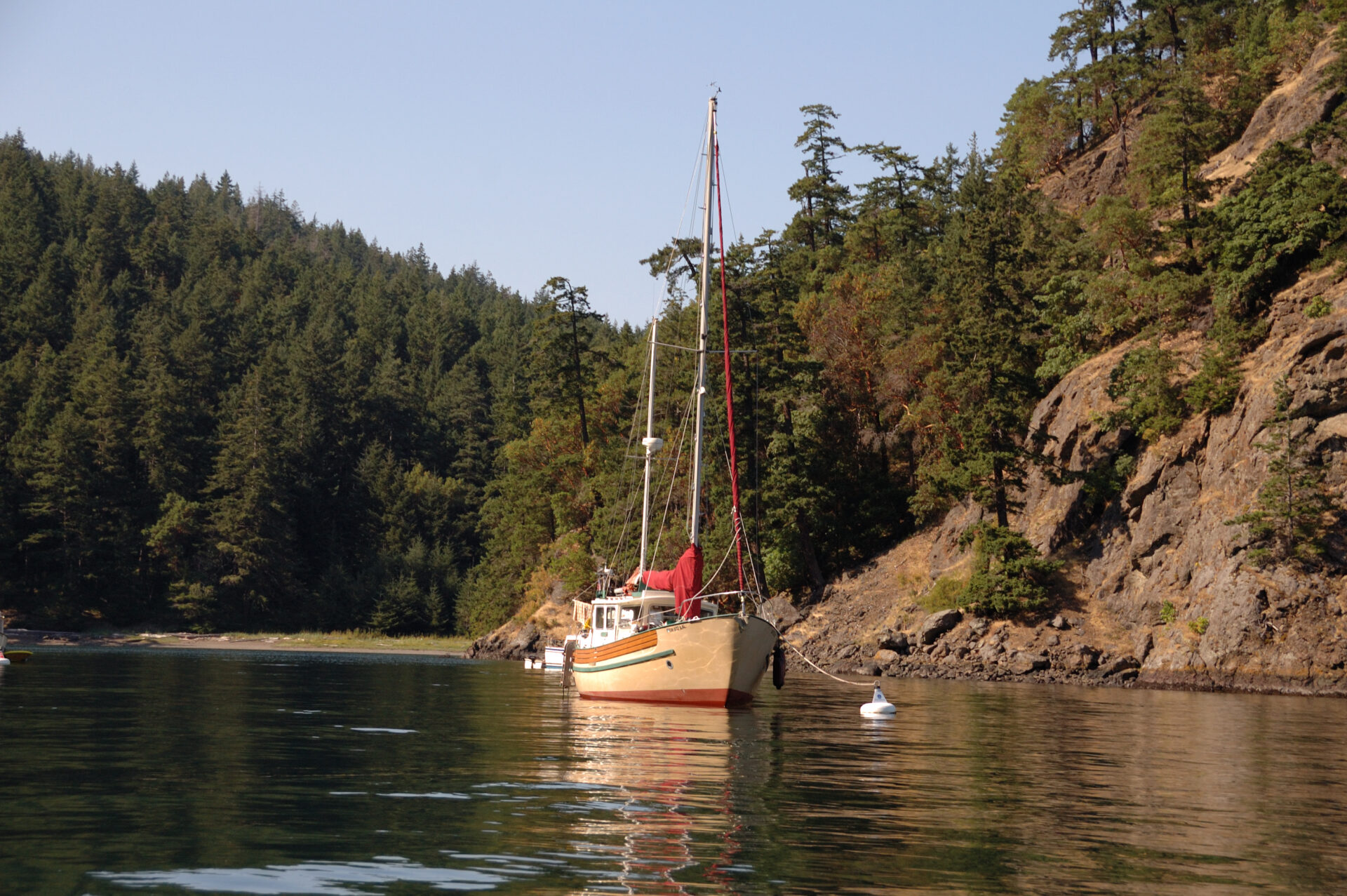 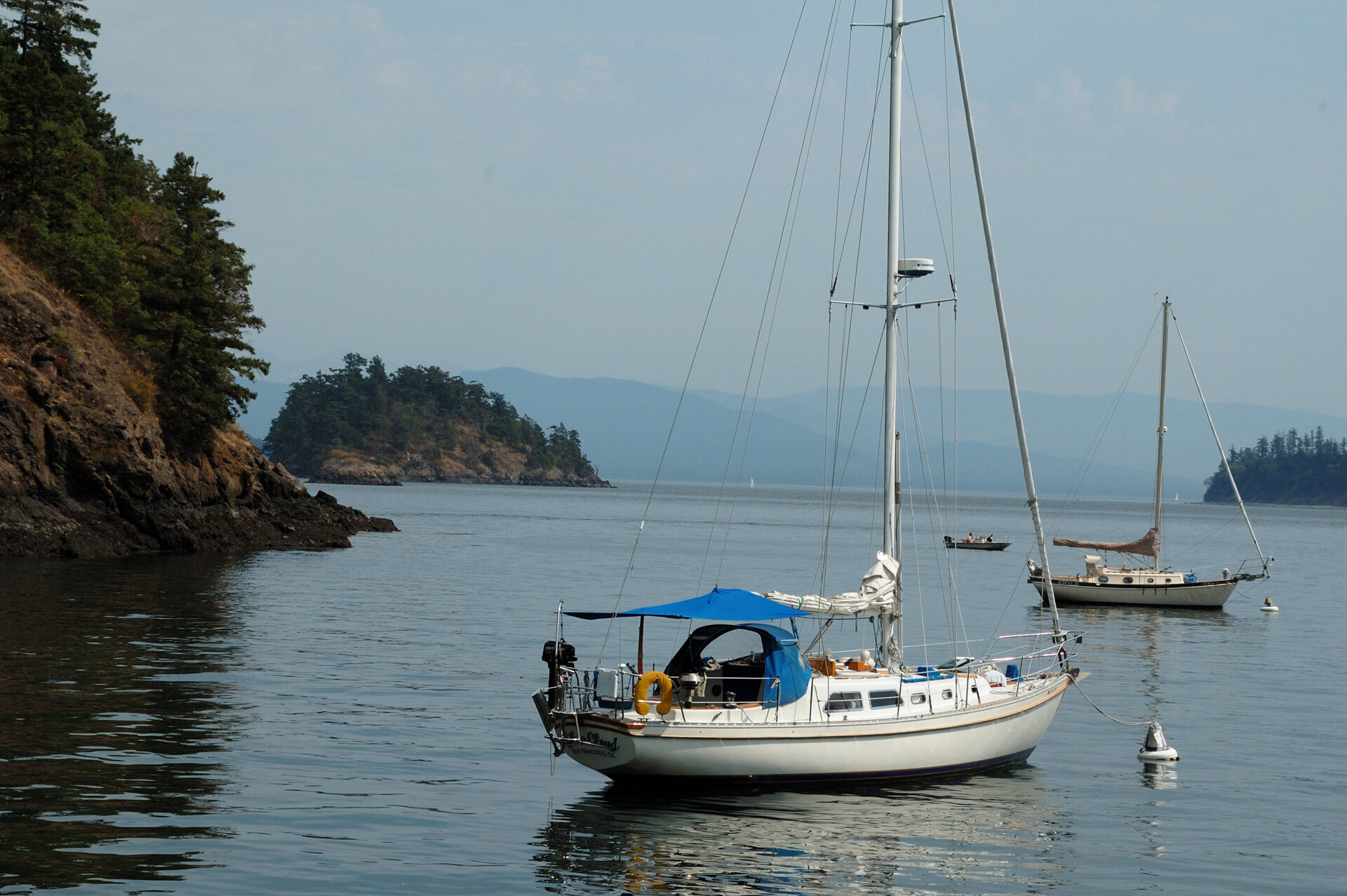 The aroma of brewing coffee fills the cabin as we enjoy the morning sunlight on board Easy Goin’ in Eagle Harbor on the east side of Cypress Island. Although there are few anchorages on this island, it’s one of the last undeveloped spots to visit in the San Juans and is also home to Eagle Cliff, a great lookout spot and a popular hiking destination among boaters.

Paradise Undeveloped  Located on the eastern side of the San Juan Island archipelago, Cypress Island is one of our favourite places to visit because of the lack of development. While most of the San Juan Islands have been privatized and developed, their shorelines made forever off-limits by private owners, Cypress Island has actually gone the other way. The island has escaped most development because of access issues, rugged terrain, and poor agricultural soil, which while bad news for developers, is a big benefit to boaters.
The 5,500-acre island has been left in its pristine natural state, with 90 percent of it managed by the Department of Natural Resources and 3,800 acres designated as a Natural Resource Conservation Area (NRCA) and a Natural Area Preserve. This gives high priority to the conservation of natural systems, wildlife, and dispersed recreational values. The island is also home to nearly 200 species of mammals and birds. 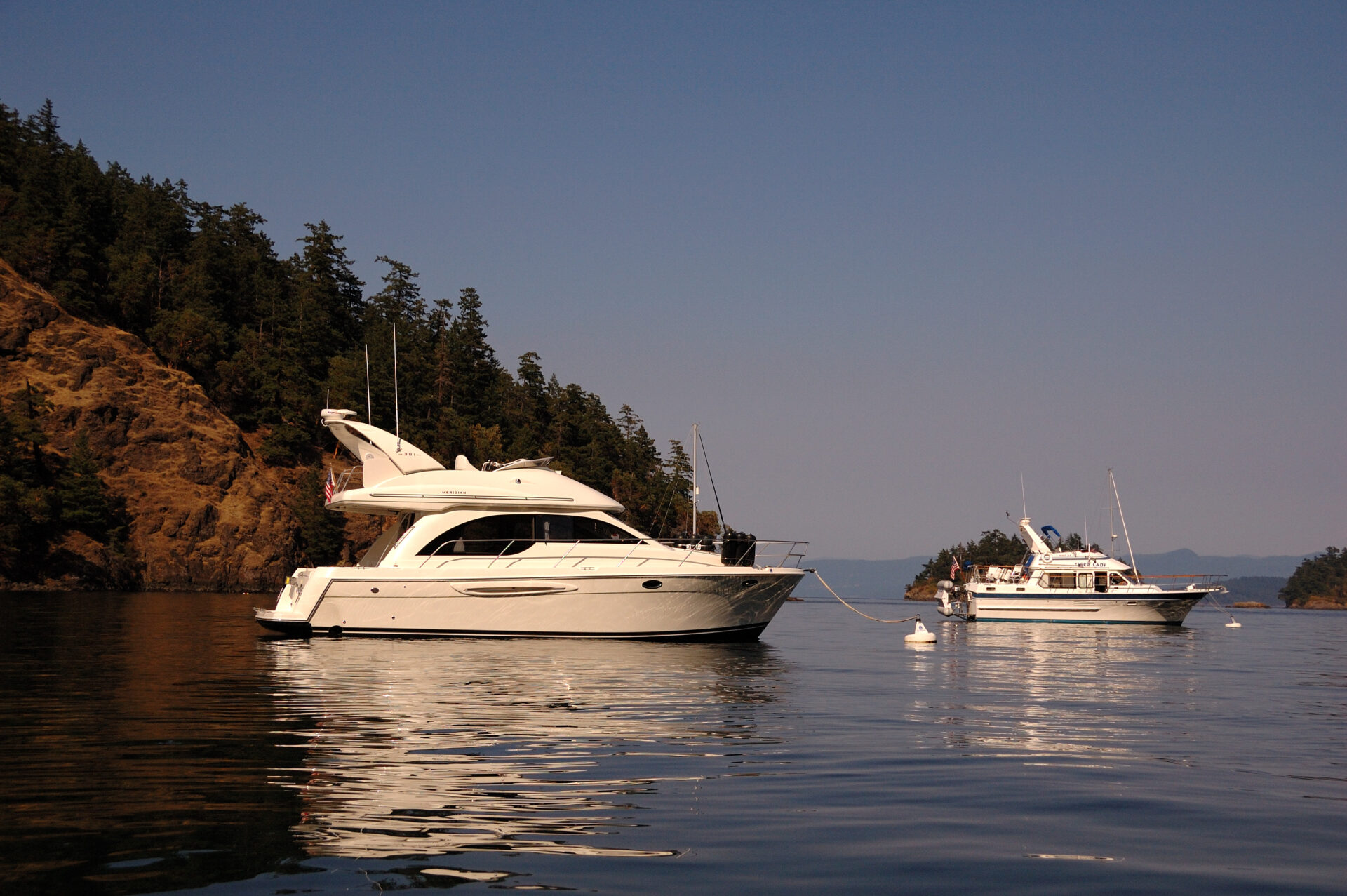 Island History  Cypress Island is the historical home to the Coast Salish people and later European settlers. The Salish economy was based on the seasonal harvesting of resources by hunting, fishing and plant gathering. The First European record of Cypress Island comes from the Spanish expedition commanded by Juan Francisco de Eliza in 1791. It was charted and identified as “Isla de San Vicente.” However, the island was named again by Captain George Vancouver in 1792 when he mistook juniper trees for cypress trees. Perhaps the island should really have been named Juniper Island—too late now! In his explorations, Vancouver described the island as “principally composed of high rocky mountains and steep perpendicular cliffs.” Sounds like he agreed it was the perfect place for a morning hike.

Where to Anchor  One downside to visiting beautiful Cypress Island is the shortage of protected anchorages and lack of marine amenities. Despite this, boaters still visit all year long because of its natural beauty, seclusion and opportunity for outdoor activities.
Although Cypress has few anchorages, none of which are very good, the good news is there are three moorage areas: Cypress Head, Eagle Harbor and Pelican Beach with a total of 25 mooring buoys maintained by the Department of Natural Resources. The majority of the buoys reside in Eagle Harbor, our preferred gunkhole, which shoals in the middle on low tides. It’s also possible to anchor in the entrance of the harbour but the better protection from northerly breezes and wash from passing boats is deeper in the harbour.

Island Explorations  There is an extensive trail system on the island, approximately 30 kilometres in length, based mostly on old logging roads. Others, constructed by Outward Bound and the Student Conservation Association, include a number of lakes and access to beaches at several harbours. The networks of trails wander the full length of the island through lush, healthy 100-year-old second growth forest.
The plan for our morning was to fill the daypack with lunch, water, and a camera then hike and explore a portion of the islands trails with the end goal being the top of the 840-foot Eagle Cliff. Our route took us past shallow lily pad filled Duck Lake, an 11-acre wetland. Just off the trail, at the edge of the lake, we discovered an observation area with a rustic cedar table, bench and log stools. We took a few moments to sit in the shade enjoying the peacefulness and buzzing of the dragonflies and hummingbirds as they skirted the shore of the lake.
As we continued our morning hike we picked up the Eagle Cliff trailhead just upland from Pelican Beach on the northeast side of the island. The one-mile trail up to Eagle Cliff is closed from February through July 15 each year to ensure that endangered nesting Peregrine Falcons are undisturbed. Because of the bountiful wildlife, one thing to note is that dogs must be leashed at all times. 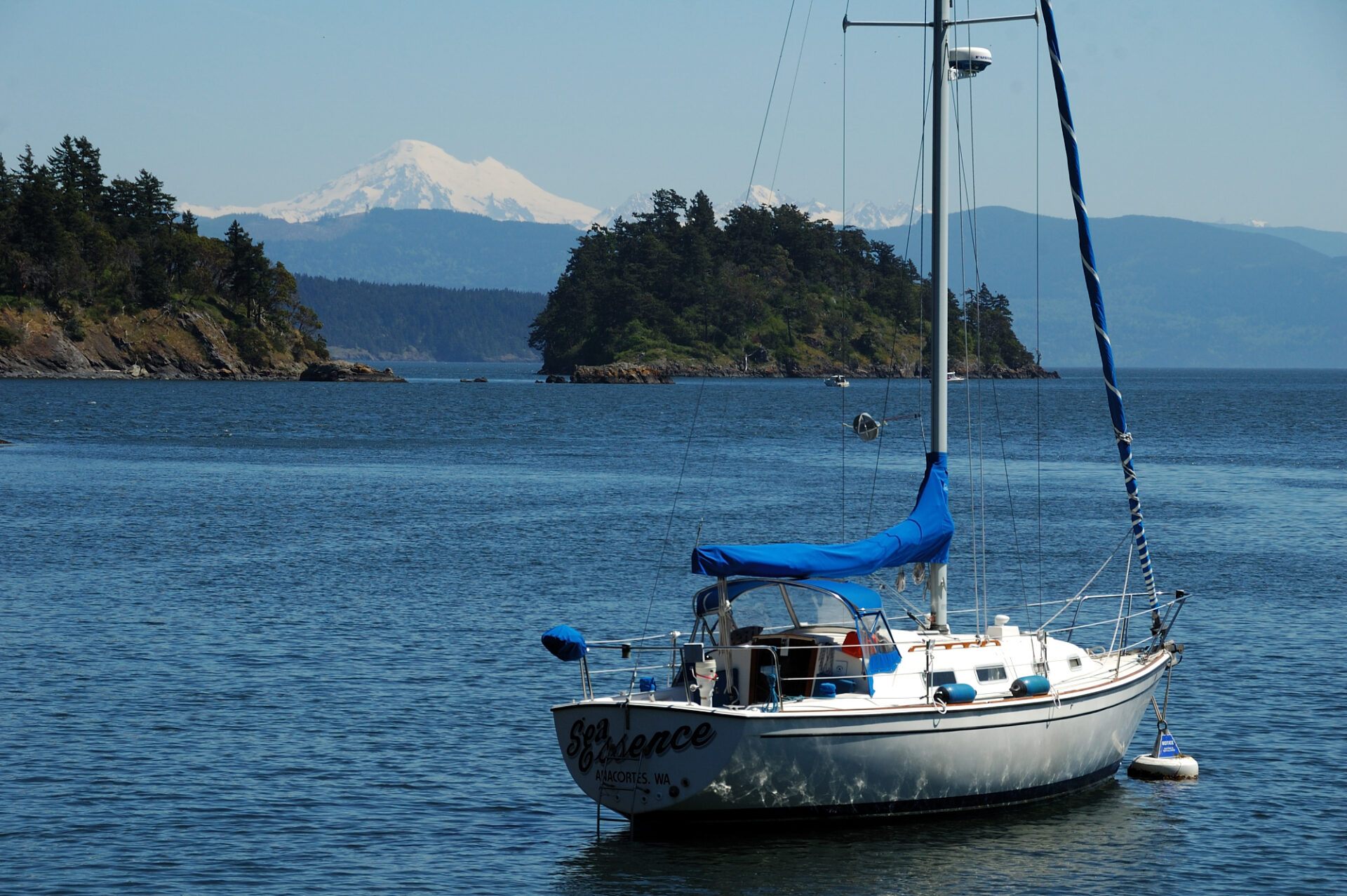 Summiting Eagle Cliff  The hike is popular with boaters, although on this day we didn’t see any other hikers. The climb is easy except for the last few hundred yards, but the breathtaking view is well worth the [HOW MANY HOURS?] hike. Although it was a bit overcast, when we reached the summit of Eagle Cliff we were rewarded with a stunning panoramic view of the San Juan Islands, Mount Baker and the Olympic Mountains. The look down over the edge into Foss Cove is hair raising and definitely not for those who experience vertigo. We enjoyed the view while eating our lunch, took a few pictures and headed back down the trail to our anchorage. 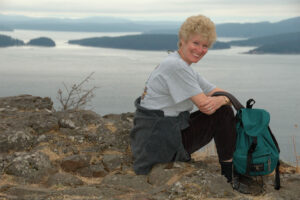 On our way back we noticed ripe juicy blackberries along the trail. They were so tempting I had to pick a few and eat them right there. They were so delectable I cut the top off the two empty plastic water bottles in the daypack and proceeded to fill them with berries as we worked our way down the trail. The berries would be the perfect reward to complement the natural beauty and bounty of wildlife in Eagle Harbor after an invigorating hike.