The first pilings have been pounded into the ocean floor and a 300-foot dock—the 12-foot-wide anchoring portion of the marina—has been barged into place. After 30 years of wrangling, the Victoria International Marina is finally being built. When completed, the marina will offer berths for yachts ranging from 65 to 150 feet.

Why did it take so long for Victoria to build a luxury yacht marina? The saga began in the mid-1980s when the Province stipulated that a facility for larger yachts should be included in the development of the Songhees, an obsolete industrial area next to Victoria’s northwest harbour. The Feds chimed in ordering that berths should measure a minimum of 65 feet, as dock space for larger yachts was lacking. Over the decades, many marina designs were developed to comply with changing federal, provincial and municipal regulations.

Several anti-development and “small is beautiful” community groups—especially kayakers—strongly opposed the construction of the marina, leading to hearings, law suits, numerous letters to the editor and unending delays. Others saw opportunities for tourism, marine services and consumer goods sales. “Fortunately,” said Craig Norris, chief executive for developer Community Marine Concepts, “we now have negotiated permits with all the jurisdictions, federal, provincial, municipal and First Nations.” With 28 berths, the marina, owned by three families and costing $24 million to build, will be the first in Canada designed exclusively for luxury yachts.” 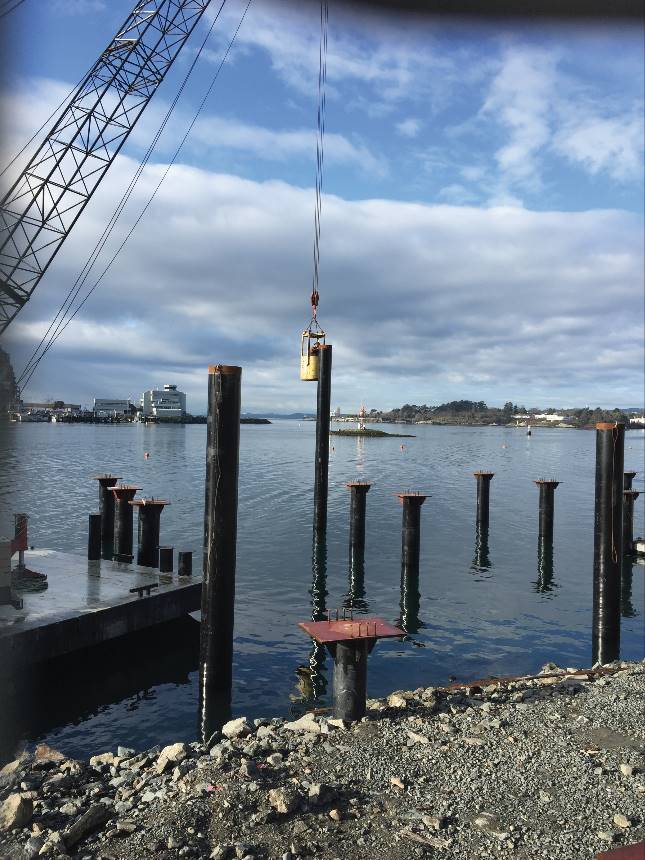 BC Hydro is installing facilities so that each slip will have a minimum of two 250-amp and one 100-amp power plug-ins. “We are offering maximum flexibility in power connections,” said Norris. “Yachts don’t have to run their generators as electric services will never be an issue.”

The docks will be flanked by two on-shore buildings, the first housing a restaurant and concierge services, the other accommodating a variety of marine services, conference facilities, and a lounge/gym for yacht crew. “Our facilities will be unique for Victoria, a bit spa-like,” said Norris. “But not overdone, more ‘Victoria-sized.’”

The marina has contracted Synergy Enterprises to ensure operations are as environmentally sound as possible. Marina staff will collect waste and pre-sort it into standard recycling categories. A pump-out will be installed. Staff will be trained to avoid hydrocarbon contamination. Only electric vehicles will travel the docks, and where possible, marina service vessels will be hybrids. When operational, the marina will seek the Georgia Strait Alliance clean marine designation.

So when you build it, will they come? “We had a booth at the Seattle Boat Show,” said Norris, “and were quite surprised by the high level of interest. People told us they don’t come to Victoria often because it’s so difficult to get moorage for a larger boat. They say the harbour marinas are sold out during the summer and so they just skip our city. But now that VIM is opening, it will become a destination for larger yachts.”