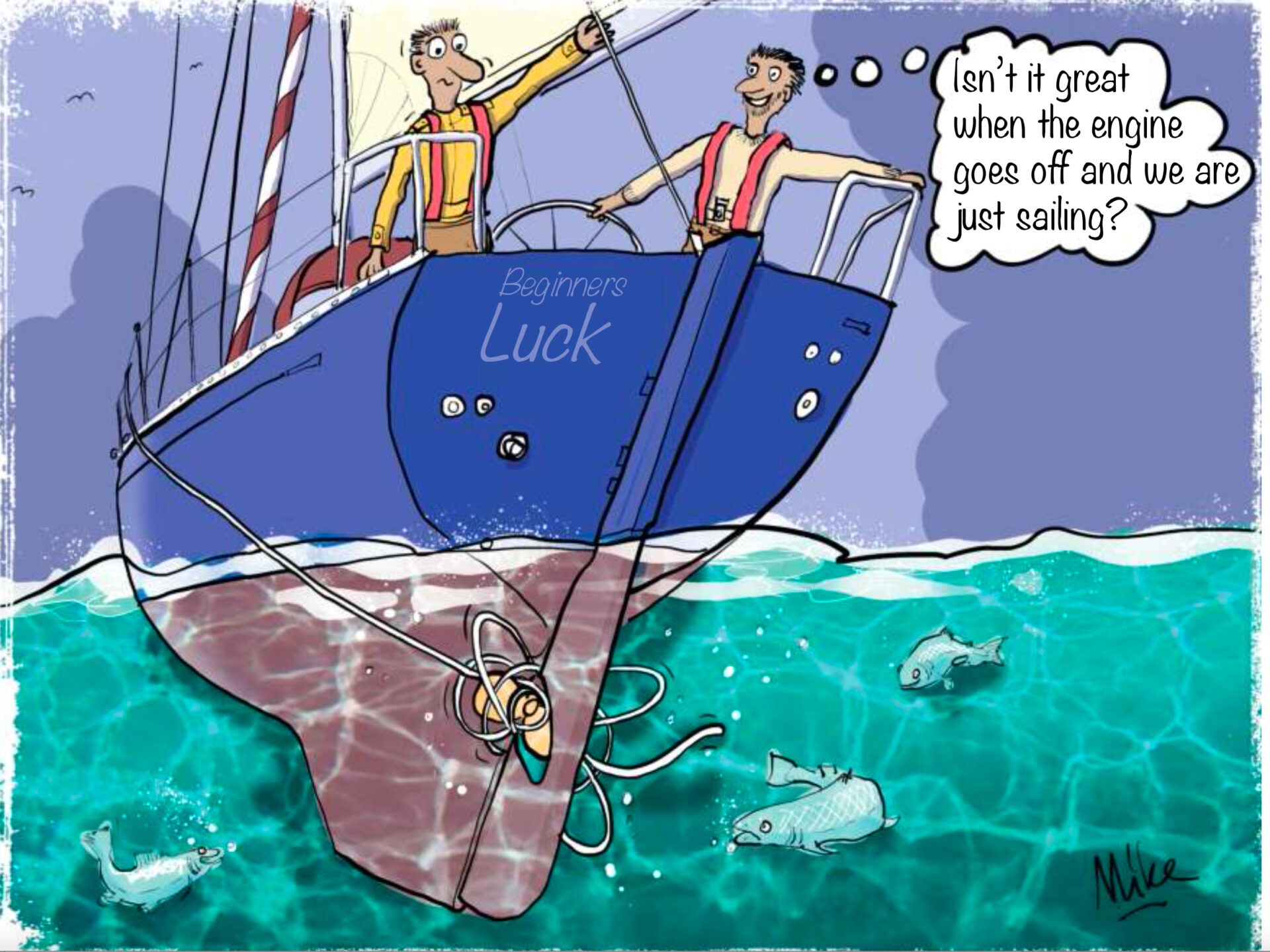 Shortly after obtaining insurance for our new-to-us sailboat, my partner and I along with two friends, found ourselves leaving False Creek and crossing the Strait of Georgia on a windy afternoon, bound for Tugboat Island. Since we had never sailed there, our goal was to arrive before dark to better navigate the entrance to Silva Bay.

As we rounded the Point Grey bell buoy, the wind became strong and shifty. The seas were rough enough to test my girlfriend’s stomach. Twice. But she’s a trooper and we continued undeterred until the shifting wind forced us to drop the sails and start motoring. The engine fired up, and as we were bow to the wind, we brought down our mainsail. At this point we could really feel the strength of the wind! Then out of nowhere our engine stopped. We quickly hoisted our mainsail back up and turned our attention to the engine, which started again easily. Unfortunately, as soon as we engaged the transmission forward, it stalled. Likely a fouled propeller, we thought. Within a few seconds, we found the culprit: our starboard jib sheet had no stopper knot, and it wasn’t cleated. Contrary to good practice, we had turned into the wind before furling our foresail, which flapped more than it would have had we done it right and some line had ended up in the water in the process. In our haste to make it to our destination before nightfall, each of us assumed someone else had taken care of the sheets, yet nobody had ensured that was the case. We weren’t too close to shore and had enough wind to keep sailing for the time being, but if we were unable to clear the fouled propellor, we’d have to call for a tow.

Within a minute, I was inside the cabin, poring over the shaft behind the transmission. I asked my friend on deck to tug on the fouled sheet and advise if he felt the tension easing. Wedging a wrench somewhere in there, I turned the shaft in the direction where it seemed to move the easiest. Thankfully, I heard confirmation from above that the sheet was easing up. After a few more turns of the shaft, the line came completely free, with hints of our blue anti-fouling paint. The engine then started fine and engaged forward with no issue. All our lines were tidied up, stopper knots were made and less than an hour later, just as it was starting to get dark, we made it to our destination. While making dinner onshore and roasting the day off by the fireplace, we learned about the waterspout and small tornado that happened an hour or two after we passed abeam of the Vancouver Airport. At no point were we in real danger, but now we understood how tall those dark distant clouds must have been, and why the wind direction was shifting so much during our passage.

I have no doubt that my beginner’s luck will only get me so far and that my future sailing years will bring about more mishaps. But by learning from others’ mistakes and my own ones too, I can only hope there won’t be too many, and that they will remain of no grave consequence. When we cross paths, let’s have a drink and share such stories, including those we wouldn’t dare put to paper. There are few better ways to become safer sailors!