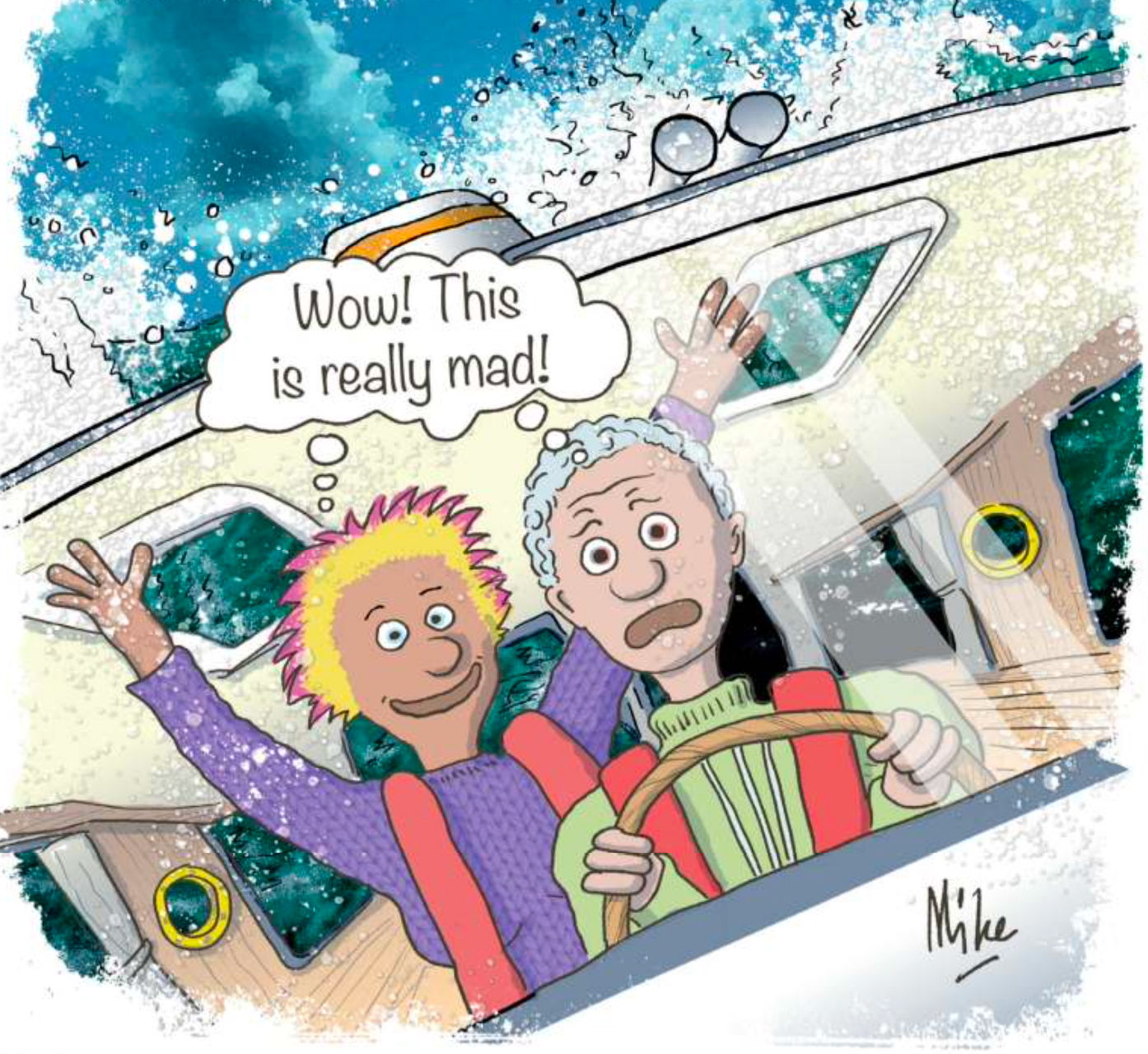 It was a cold January when my 24-year-old daughter and I decided to go on a mother/daughter boat trip. My husband and I had purchased our 25-foot Ranger Tug earlier in the season and I felt totally comfortable at the helm. So, when my daughter asked about a trip with her mom, I didn’t feel anxious to take the boat out with her. On our first day we got a late start from our home marina near Olympia, Washington. It was dusk as we motored under the Tacoma Narrows Bridge and we barely made it to the guest dock in Gig Harbor by dark.

The next morning we untied from the dock and set off at about 10:00. Our destination was Winslow, a welcoming little town that is easily accessible via Eagle Harbor, on the east side of Bainbridge Island. With mild wind predicted for the day we travelled north from Gig Harbor. By the time we reached Blake Island, however, the wind had picked up and I could see rough seas with white caps to the east of Blake Island.

We motored on the calmer west side of the island and headed to Restoration Point off the southeast tip of Bainbridge Island. The wind seemed to increase even more as we rounded the point and the five-foot chop began to really pick up. This was my first experience at the helm in really rough waters. The bow began to rise and then slam into the waves and water sprayed the windshield so I couldn’t see out. After about 15 minutes my daughter looked over and asked, “Is this boat made to handle this rough water mom?” I told her, with a nervous giggle, “Co-pilots aren’t supposed to ask questions like that!”

Eventually, I made the decision to turn around and head back to Blake Island and the safety of the small marina at Tillicum Village. We quickly realized what a huge mistake turning around was when the boat took the swell from the rear, fishtailing down the waves like an inexperienced surfer. The boat heaved over so far that all the kitchen drawers were flung onto the floor along with everything else that wasn’t strapped down. At this point I realized that it was better to go headfirst into the waves and wind.

I tried to keep my fear to myself and not let my daughter know how freaked out I was. Thoughts started to race through my head about how I was going to keep us safe. Before we left Gig Harbor, I read a sign in a shop window that read, “A smooth sea never made a skilled sailor.” That quote stuck with me all day as the rough seas were teaching me some very valuable boating skills.

After what felt like a whole day of adrenaline pumping, the waters began to settle down. We looked over to the east and spotted a Seattle-Bainbridge ferry coming our way. We followed the ferry into Eagle Harbor and slipped past it and into a spot on the public dock. I was shaking uncontrollably and I told my daughter we needed a drink! She agreed and we walked the path into town for lunch and a celebratory beverage. We had made it and it felt so good to be on solid ground again.

My daughter hasn’t been out with me since, but we’re planning her 25th birthday boat trip into the San Juan Islands this summer. Wish us luck!