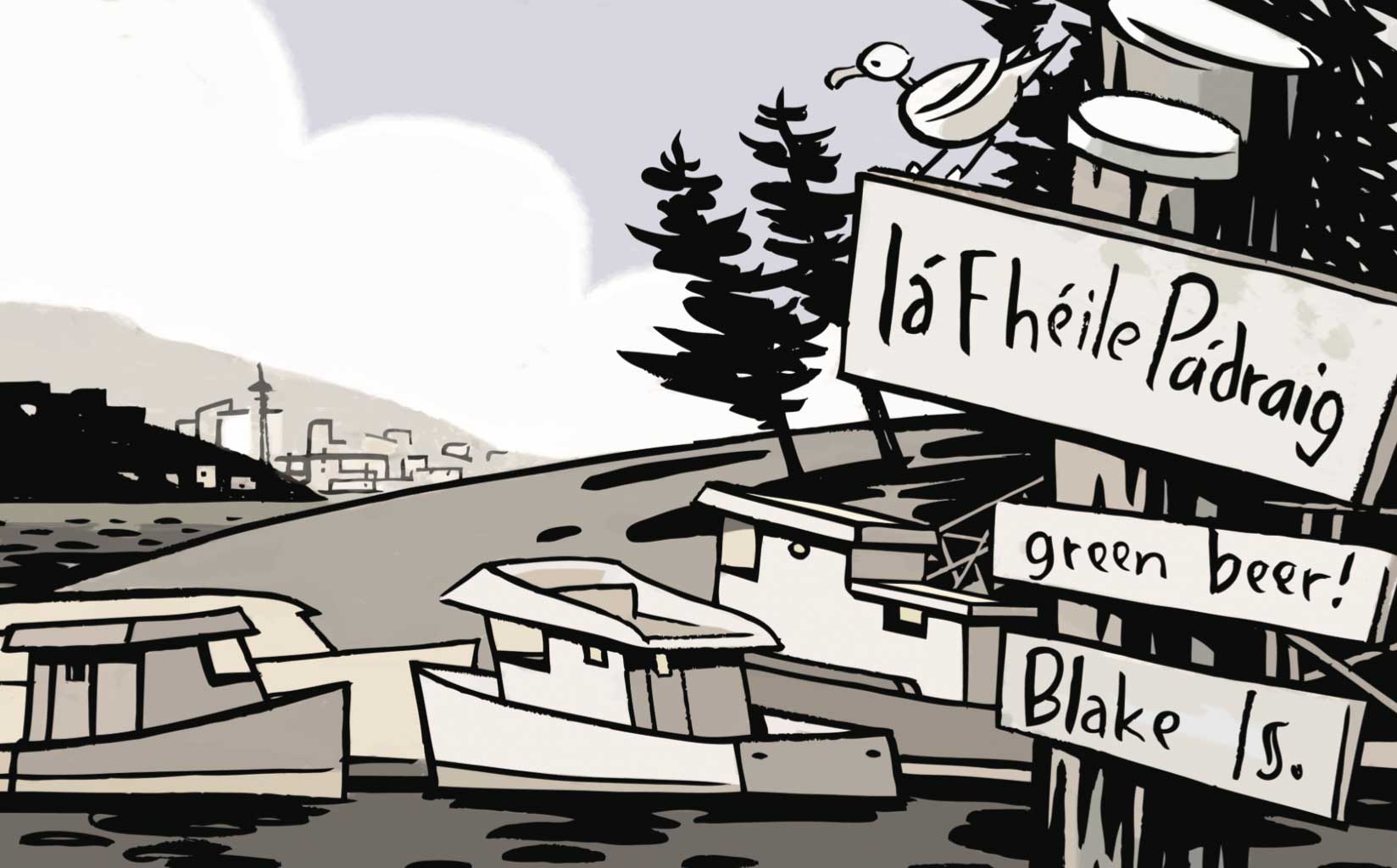 What would St. Patrick’s Day be without glittered shamrocks and leprechauns, and for the menu, green beer and corned beef and cabbage? And why do we associate these with Ireland? With the exception of shamrocks, they are not to be found on the Emerald Isle. Leprechauns are mean, vicious little people, not the charming folks of advertising. The Irish would never sully their national brew with green dye. Corned beef is not an Irish dish.

But the rest of the world, especially those of us in North America, can’t let facts get in the way of a good party. A couple of years ago, I announced to cruising friends who, like us, were going stir-crazy after a long, wet winter, that we’d have the Chelsea Lynn moored at the dock at Blake Island, for “Lá Fhéile Pádraig,”the Feast of St. Patrick, and invited them to join us. The entire island is a Washington state park located across Puget Sound from downtown Seattle, an easy destination for our Seattle cruising buddies. I decided to make my own corned beef for my contribution to the St. Paddy’s day festivities.

St. Patrick’s Day has been an official Christian feast day since the early 17th century, but it’s only become a green-tinged party since Irish-Americans began looking for a way to honour their heritage and homeland. In the last 150 years, they transformed St. Patrick’s Day from a religious feast day into a cultural party. It didn’t take long for corned beef and cabbage to become associated with the North American St. Patrick’s Day festivities.

The best corned beef, however, did not originate in Ireland. For centuries, cows in Ireland were a symbol of wealth. They were too valuable to be eaten, unless you were of the aristocracy. Hogs were the most common animal bred for food.

What we think of today as Irish corned beef is actually Jewish corned beef thrown into a pot with cabbage and potatoes. After the Potato Famine of the 1840s brought about a million Irish men and women to North America, they were looking for a way to celebrate their cultural heritage. Staunch Catholics, they turned to their patron saint for inspiration, St. Patrick. For the menu, they turned to the new neighbours.

The Jewish community, particularly in NewYork City, made corned beef from beef brisket, a kosher cut of meat from the front of the cow. Brisket is a tougher cut, but the brining and cooking processes transform the meat into the tender, flavourful corned beef we know today.

The popularity of corned beef and cabbage has never crossed back across the pond to the homeland. There, the traditional St. Patrick’s Day meal is lamb or bacon.

Making corned beef and cabbage sandwiches is easy. So is making your own corned beef, for that matter. Whether you make it at home ahead of time, or on board, it only requires a little patience and refrigerator space to store a beef brisket while marinating in the brine for 10 days or so.

With St. Paddy’s Day coming on March 17, you still have time to make your own corned beef for a traditional Irish party that isn’t, well, all that traditional, after all.