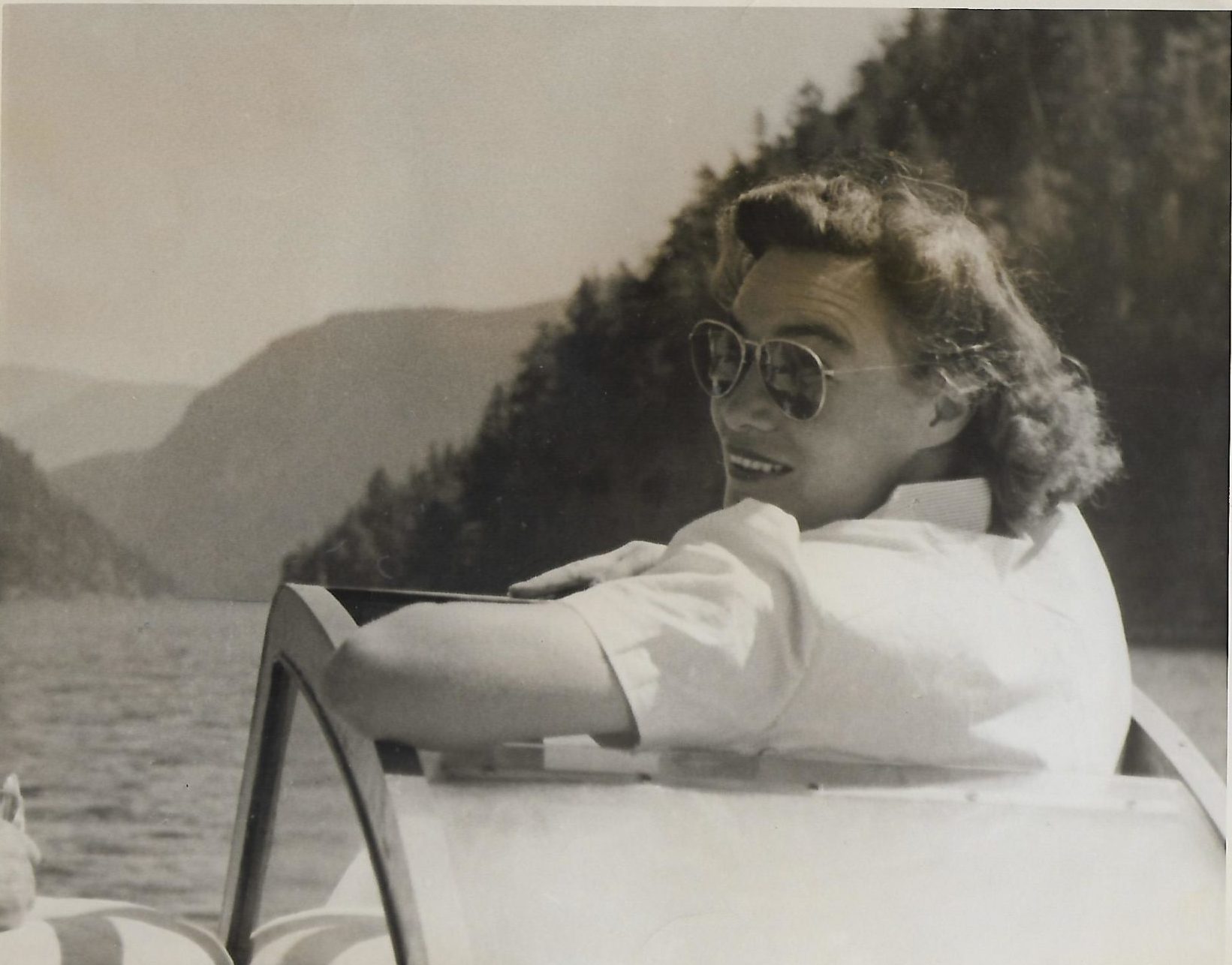 Dorothy Blackmore took to the water as a little girl aboard her father’s boats. In 1918, George Blackmore had started a marine services company in Port Alberni, when Dorothy was five years old. George ran a water taxi service as well as tugboats. From the time they arrived on the “Canal,” as the Alberni Inlet is nicknamed, Dorothy felt at home, and at age 10 she “soloed,” running a boat on her own. She was often able to leave school to crew on her father’s vessels. When she graduated from high school, she joined her dad’s firm full time. She frequently delivered and collected marine pilots to and from their ships at Cape Beale and participated in some hazardous rescues. Nevertheless, there were snide remarks about her gender from a competing water taxi service.

At age 22, Dorothy began studying for her captain’s ticket. She had the seatime, as proven by her father’s submission on her hours of service on the two water taxis and two tugs his company now owned. In 1936, at age 23, with more commercial boat experience than most men her age, she passed her captains’ exams. It wasn’t a given, though, that she’d receive her Certificate of Competency. Fortunately, she was aided by the lobbying from one of the pilots she ran up and down the canal, and by her MP, A.W. Neill. In January 1937, Neill wrote to George Blackmore (not her): “I am advised that the Department [of Transport] has decided that a woman is eligible to receive a certificate as master, mate or engineer, if she fulfils all the requirements of the Canada Shipping Act so that I trust that this will lead to your daughter getting the certificate she desires.” 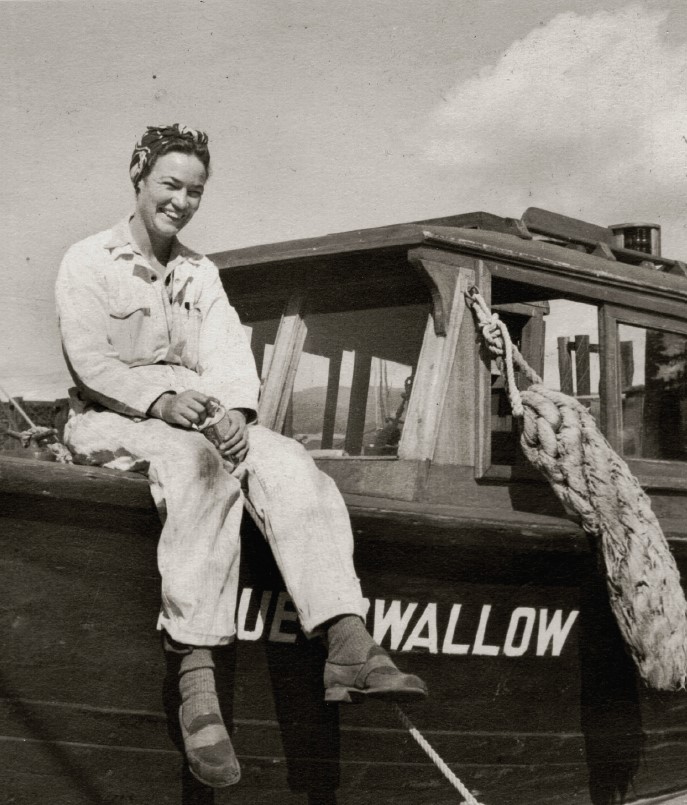 Eleven months later, in December 1937, she received her master’s certificate. “By the Honourable The Minister of Transport of the Dominion of Canada,” it reads, “Certificate of Competency/ As Master/ of a Tug-Boat in the Minor Waters/ to Dorothy Clarice Blackmore/ Whereas it has been reported to me that you have been found duly qualified to fulfil the duties as master of a Tug-boat in Minor Waters/ I do hereby in pursuance of the Canada Shipping Act, 1934, grant you this Certificate of Competency. (I’ve wondered about “the minor waters”—and presume the Ottawa bureaucracy had never encountered a storm off Cape Beale.)

Dorothy’s daughter and son-in-law, Patricia and Bob Currie, have uploaded a collection of newspaper articles published when Dorothy received her master’s ticket. These reported mostly the same facts using the same words (like today’s news feeds) and employed language that was both laudatory and sexist. While three Montreal papers reported that Dorothy was the first woman in Canada to receive her certificate, they also mentioned she was blond. Other publications described her as “pretty as a picture.”

The Mobile Times of Alabama wrote that, “pretty 23-year-old Dorothy Blackmore whose soft and friendly cheeks have often been kissed by the breath of Neptune will soon be Cap’n Dorothy of Port Alberni . . .” The Vancouver Sun printed a story bringing up all the clichés about male mariners, such as asking if Dorothy would have a husband in every port, but then gave her full credit for passing the difficult exams, for being an excellent mechanic and not worrying about getting her hands dirty. She even appeared in an ad for the candy bar Sweet Marie, which after congratulating her for her achievement, urged her to stock her boats with their brand of candy.

All this publicity did not seem to faze Dorothy. Having broken the gender barrier, she earned her engineer’s certificate three years later. She took over her father’s business when his health began to fail. She continued to run a fast 28-foot passenger ferry able to operate at 30 knots. In December 1945, Pacific Motor Boat portrayed her as the same intrepid mariner as the earlier articles. She continued to deliver and collect marine pilots; during the Second World War she conveyed air force personnel to their bases in Ucluelet and Tofino. Because of the Japanese threat and her service in open waters, she became part of the Merchant Marine and proudly wore her pin.

After the war, the boats were sold and Dorothy married Pitt Clayton, an ace RCAF pilot. Heather Harbord reported in a Western Mariner June 2004 article that Dorothy continued some taxi work, but also collaborated with her husband in a sportfish rental company. The birth of two daughters slowed her time on the water. In the 1950s she was hired by Island Tug and Barge to skipper booming tugs with her husband serving as mate.

When I asked Patricia Currie about her mother’s gender-barrier breaking, she responded that Dorothy never spoke of such things. “My mother never considered herself as a rule breaker or a pioneer,” she told me. “She’d never thought of doing anything but being competent on the water. Her view was, ‘You want to do something? Do it.’ She was exceedingly modest, never boasted about being the first. And family meant everything to her.”

Patricia also revealed that after their retirement in 1969, her parents went to the UK, bought a sailboat, took an afternoon of sailing lessons and soon found themselves in a Force 9 severe gale in the notorious Gulf of Biscay. It didn’t deter the pair; they continued sailing the Mediterranean for several years.

They sold the boat but bought another one, visiting tiny ports in Spain and Portugal, and motoring through the French canals with a stepped mast. The only trouble they encountered was while delivering a motorboat to Miami and drifting too close to Cuban waters—they were shot at and arrested, but were released after a night in jail.

Bob Currie talks about his mother-in-law in warm terms. “Many guys aren’t complimentary about their mother-in-law,” he said. “Mine was wonderful, warm, calm, intelligent. She had courage…”