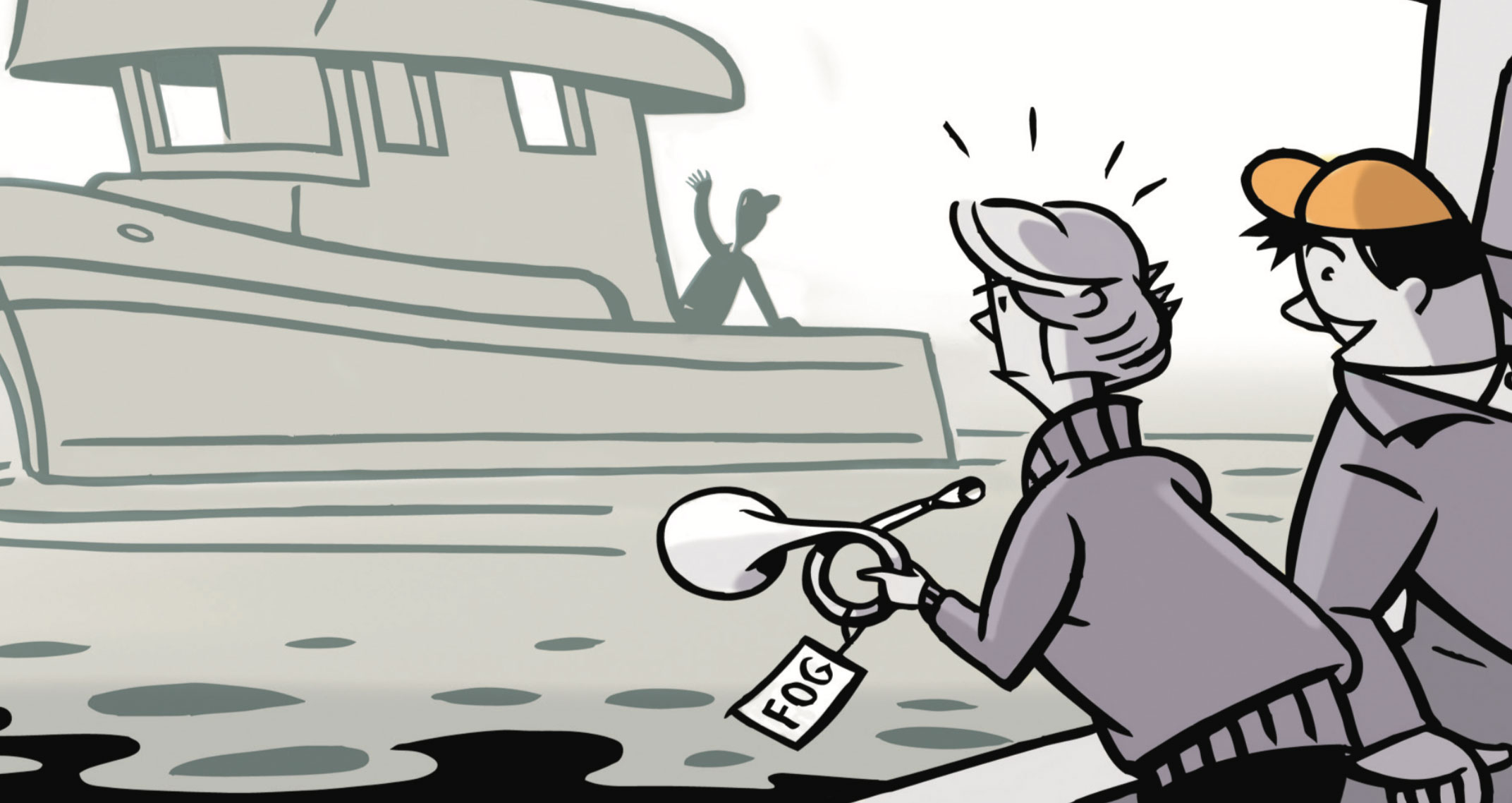 Disclaimer: Pete is not his real name, nor was his boat named Dog My Cats. You will understand why.

How many times have we ventured out into the fog? Eyes on the radar screen, all senses alert for signs of potential danger, feeling our way along. I recall the time we set out from Port Townsend for Friday Harbor with visibility of less than half a block. Crossing the Strait of Juan de Fuca, at the stately pace of our vintage woodie, a 55-foot Chris Craft, took two hours. The seas were calm, of course, and all we had to do—or so we thought—was watch out for large commercial traffic. We turned on our automatic foghorn; I stuck my face in the radarscope while Jim watched the chart plotter and managed the helm. Occasionally, the mist would swirl away and a brief blast of sunshine would stream down through a hole in the low clouds. Just as quickly, like a camera shutter, the hole would close and we’d be invisible to the world again.

As we approached Smith Island, our waypoint approximately in the middle of our passage, the radar screen showed a target approaching from the opposite direction and on a collision course, but still nearly four miles away. “Turn five degrees right,” I said. Five degrees toward Smith Island. It should be enough to avoid the other boat and still stay clear of the kelp-infested shallows around the island. I watched. The other boat turned toward us. We were again on a collision course. “Turn five more degrees right,” I said. And a few minutes later, “One more time. ”This would put us closer to Smith Island than I re- ally wanted to go. Visions of props tangled in kelp began to haunt me. Again, the target, now less than a mile away, changed course toward us.

“Turn left 30 degrees,” I said, and watched, amazed, as the blip on the screen once again headed right toward us. “In half a minute turn left 90 degrees,” I advised, and counted off the seconds. We turned.

Suddenly, the fog and mist swirled away, and there, no farther away than I can throw a softball, appeared a fly- bridge bearing the name Dog My Cats. A member of our yacht club. Dog was closely followed by another member whose boat had no radar. Jim picked up our radio. “Pete, what the heck are you up to?”

“I wanted to see who else is stupid enough to be out here,” Pete replied, as the camera shutter closed again and he passed to our starboard. “Having fun?”

Well, definitely. Who wouldn’t be having fun in the middle of the strait with a nutty acquaintance like Pete doing his best to collide?

Today, although the sun has struggled on and off all morning with a pesky patch of fog, the long, slow thrum of fog- horns out in the Puget Sound has never subsided. We’re tied up to the dock in Oak Harbor, and we’re not leaving. Sure we have radar and lots of experience navigating in the fog. And even better GPS equipment than we did way back then. But we’re staying put. I’m enjoying the cozy saloon, where I have a stack of books I’ve been waiting to read.

And I’m defrosting a ragu sauce, which I hope will taste as good as it does when my Uncle Luigi makes it. This is one recipe that I make at home, although it could be made on board. It does not demand a lot of attention from the cook but it takes a long time—time to render the fat from the ribs and time to simmer the sauce on the stovetop, altogether six to eight hours. It freezes well, and keeps for several days in the refrigerator. In fact, it tastes better after a day or two. This evening, I will warm it for 10 or 15 minutes and serve it over a good dried pasta.

Yum! A fresh green salad and a crusty baguette will make this a stunning meal. It’s time to uncork a full-bodied red wine and start sipping. Enjoy!