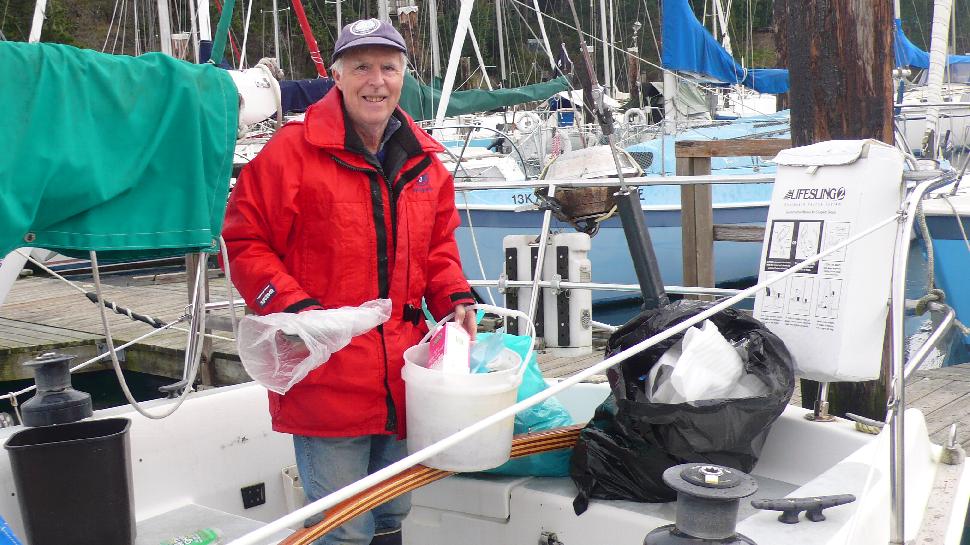 “Just throw it overboard,” our host told us. “The cans will rust, the fish will eat the scraps and the bottles will break up. But bring back the garbage bags.”

He was answering my question about what to do with the trash we had accumulated while staying in our waterfront cabin on one of the Gulf Islands while we fished and cruised in our 30-foot sports fisherman. We were preparing for our cruise across the Strait of Georgia, back to our North Vancouver moorage. Well, if the resort owner thought it was OK, it must be. So we did.

That was 1966. Deep-sixing garbage was routinely practiced back then. I’m haunted now by the thought of those tin cans, glass bottles and plastic containers still down there in company with how many others, sunk into the bottom of Plumper Sound.

Roll on 16 years. “Take the bottles and tins to the recycling bin by the wharf,” said my skipper. “The garbage goes in the black bin over there. I’ll rinse these dishes at the tap.”

We’d enjoyed a sunny picnic on Sidney Spit and now with the setting sun we are cleaning up and getting ready to return to our Crown 23 for our short reach across to our homeport of Tsehum Harbour.

That was 1982 and few boaters would ever dream of throwing garbage overboard. There was no need to, as most marine parks had garbage and recycling bins, along with potable water. Portland Island, De Courcy, Wallace Island, Sidney Spit, Beaumont provincial parks; Stuart, Jones and Sucia islands in the San Juans, all come to mind as having facilities for waste. Cruising was easier then. Our garbage could be offloaded without guilt, mooring buoys were free, and the best anchorages were emptier.

“Yikes, this boat reeks! I can’t put the smelly meat tins in the cockpit because it’s already full of garbage. Can we tow these behind in the dinghy? We’ve got another week to go.”

That was 2000. The price of mooring buoys was up, the trash bins were gone and even the recycling bins were hard to come by. The pumps and taps that used to provide water on islands like Portland, South Pender and Tent were being dismantled by governments possibly concerned with liability, and boaters were being faced with too much garbage and too little water. We headed back to our Pender Island homeport in our C&C 25 replete with redolent refuge and depleted of water.

So there’s bad news and good news. The bad is that those wonderful days of dockside trash bins and accessible water are long behind us, and hey—it was very convenient, let’s face it. The good is that now we have to take responsibility for the messes we make and the packaging those messes come in. Our attitude toward our resources and our responsibilities have grown up.

Now, however, in the 21st century, we can find ourselves up close and personal with ill-smelling company we would have preferred to leave behind.

If, like us, you like to explore deserted anchorages and tuck into quiet corners in marine parks, or cruise waters where marinas are few and far between, what’s to be done?

It’s 2016. Over the years and after many seasons of bad starts and uneasy negotiations, we’ve reached an uneasy truce with our temperamental trash.

Aboard the same C&C, we head toward the same homeport after two weeks of sailing, with garbage easily tucked into one small bin, without a peep of pungency. Wicked odours are history, extra visits by hungry wasps, flies, raccoons, crows and seagulls are curtailed, and the trash we take home is negligible.

Here’s what we do:

Being islanders, we understand the challenges and expense involved in the disposing of garbage, so at our frequent stays at marinas we enjoy the feeling of satisfaction we have at not having to add to their refuse pile. We see that as another benefit.