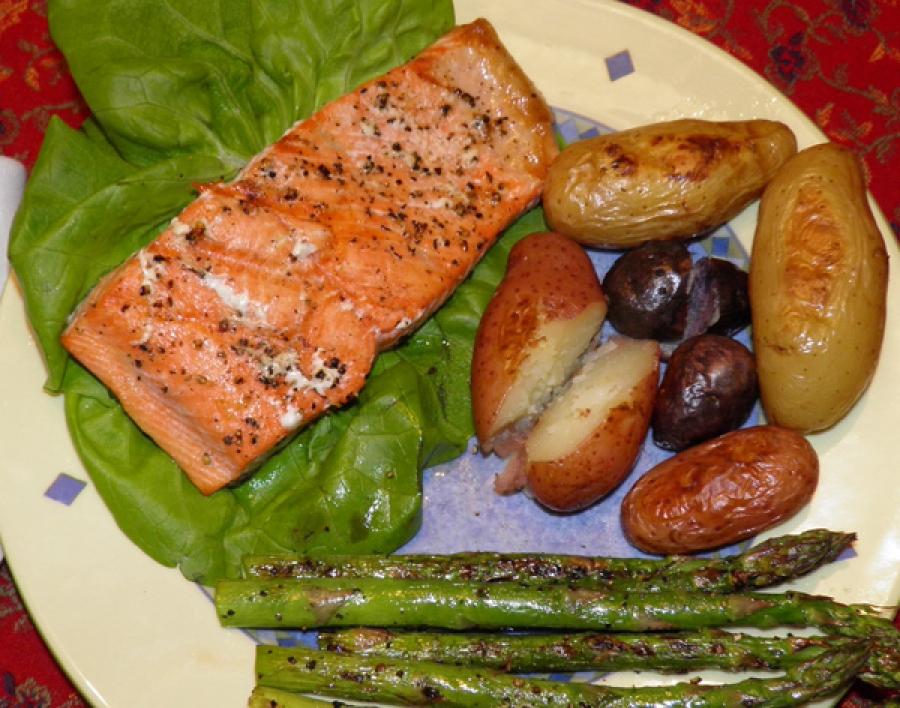 In the evening’s sweet light, the blue water of Bedwell Harbour matches the blue sky over South Pender Island. I sit in the cockpit of the Chelsea Lynn sipping a delightful pinot gris. A Corelli violin sonata plays on my iPod. I am totally relaxed, thanks to the deep tissue massage I enjoyed this afternoon at Poets Cove Resort. This is the perfect way to begin our annual boating vacation.

I look up from my book and see my husband approaching the anchorage in our dinghy, Love Me Tender. His face is red from sun and wind, and brightens into a wide smile as he ties up to the Chelsea Lynn, our Bayliner 3488 mother ship. Soon he’s telling of epic battles between fish and man, like Santiago in Hemingway’s Old Man and the Sea. Only today, the struggle occurs in Boundary Pass and Swanson Channel in the Gulf Islands. Finally, the returning fisherman holds up his monster catch—a beautiful five-pound sockeye salmon. He too, has experienced the perfect start to our boating vacation.

Because few of my husband’s fishing expeditions come back empty-handed, I have anticipated this moment and have already laid out the essentials for a delicious salmon dinner: salt, pepper, olive oil and lemon.

By the end of our vacation I will be experimenting with new recipes. I plan to try salmon rösti and rosemary-salmon skewers. At some point, my husband will insist on an old favourite: salmon fillets coated with dill and chili powder. But for the first fresh wild sockeye of the year, I insist on keeping it simple. I remember the advice I once received about the proper way to prepare fish from Captain Rick Fleischman, owner, skipper and chef of the Alaska-based charter company, Sound Sailing. “All you need is lemons.”

It’s really not much more complicated than that. I want the exquisite taste of the sockeye to be the treat. After all, it’s been called the filet mignon of salmon for good reason.

The name “sockeye” is believed to be the anglicization of the word sθə́qəy in the First Nations language Halkomelem, which is spoken by the people along the lower reaches of the Fraser River. The salmon runs returning to the Fraser River and its tributaries have varied widely over the past decade, but an estimated 25 million fish returned in 2010, more than double the preseason forecasts. It was the largest run in over more than a century. It gives hope that this wonderful fish will continue to be available for future generations. of fishermen.

Those future generations will probably have invented a Teflon grill on which to cook their salmon, but we don’t have such a luxury today, so we have to create one to get the salmon off the grill in one piece. Some recipes recommend raising the salmon off the grate by placing it on fennel fronds or citrus slices, but then you’re really poaching the fish more than grilling it. Cooking it on a piece of aluminum foil is fine if your preference is baked salmon. I want the grilled fish to be the treat, but I also don’t want to serve a mangled pile of crumbs because the fillet is stuck to the grill.

I have developed the following method to ensure no sticking, thereby creating the perfect fillet.

First, thoroughly clean the grate. Place a piece of aluminum foil over the grate and turn the heat to high for 10 to 15 minutes. Then use a wire brush to remove all residues from previous barbecues.

Second, create a Teflon effect on this newly cleaned grate. A single coat of oil isn’t enough to prevent sticking. Using a wad of paper towels and a pair of tongs (remember the grill is extremely hot at this point), coat the grate at least five times with vegetable or olive oil, dipping the towels in oil between each coating. The grate should be black and glossy when finished. Lastly, before you season the fillet or lay it on the grill, brush each side of the fish with olive oil.

This foolproof method of preparing the grill also works well for any kind of fish.

Serve immediately with lemon wedges. It goes nicely with grilled asparagus and roasted fingerling potatoes, but any fresh vegetables will be just as good. Some folks, including myself, like to drink pinot noir with salmon, or a nice oaky chardonnay is also a great accompaniment. But it’s summer and who cares? Drink whatever you like or happen to have on board, and enjoy!