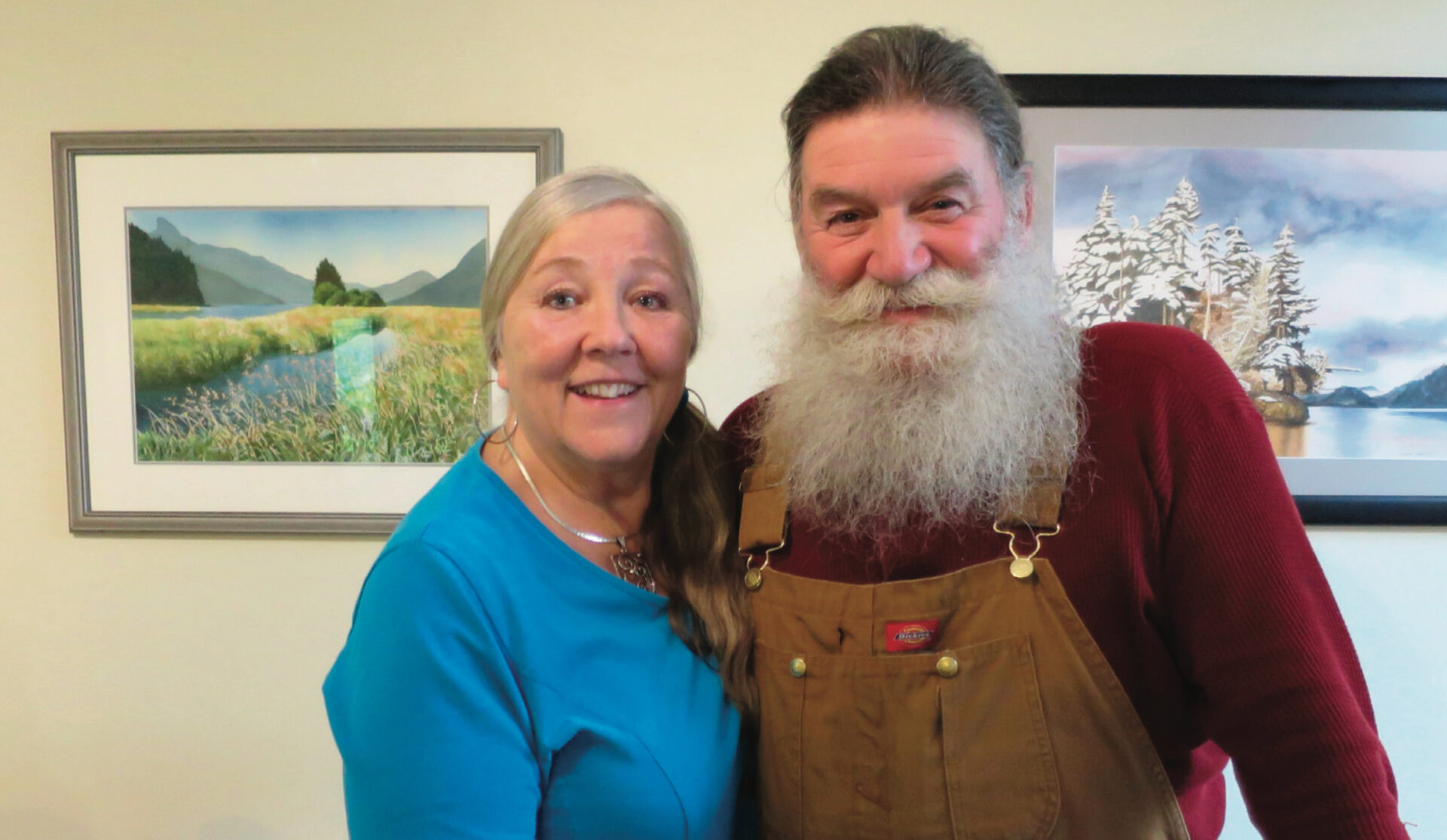 From a lark to a lodge, a couple’s crazy life on the coast

Pierre and Tove Landry have landed. Literally. After more than 40 years living mostly in floating abodes, they’ve bought a spacious house on seven acres in the Ladysmith area—a house filled with paintings and photographs from their earlier Broughton Archipelago life and with Tove’s dad’s sinuous wood sculptures of coastal wildlife. The couple had moved into their land-based domicile after selling their popular marina and lodge, Pierre’s at Echo Bay, to the Kwikwasut’inuxw Haxwa’mis First Nation. That sale included the sale of their float home that had been meticulously put together by Pierre.

The couple met in Montreal in 1977 where Pierre worked in the film industry. He’d grown up in francophone Montreal and his native Québécois sometimes peeks through his English. They took a holiday in Florida, and in an internet article, Pierre posted a photo of them on the beach. The photo reveals his trademark dark, abundant whiskers that have turned into a white, Moses-like beard, while Tove is a willowy, bikini-wearing nymph, who has nurtured her long tresses to this day.

“In ’78, we took the train from Montreal to Vancouver as a lark,” Tove recalled. “We were young and ready for adventure. We’d scraped together the fare and subsisted on a loaf of bread and peanut butter during the train ride.”

Tove, the daughter of Danish immigrants, had grown up in Nanaimo and the pair visited there. Needing income, they responded to a help-wanted ad. “I’m ready to be hired,” said Pierre during the job interview. He got the job and their lives changed forever.

Within days, they began running a hunting and fishing camp with a store, fuel dock and post office on Gilford Island’s Echo Bay—a location only accessible by boat. It was a crash course in wilderness living. “We figured we’d stay for six months,” said Tove. “With some savings, we’d go to New York or Los Angeles so Pierre could hone his knowledge of special effects. But we fell in love with the place, and when we were offered a job as caretakers of a logging camp on Drury Inlet, we stayed.”

They took along their potential new living quarters consisting of a leaky boat shed and a storage shack, one room each, no toilet, perched on tied-together logs. There were no stores, suppliers or helpers nearby, yet without a construction background, Pierre rebuilt the sheds, becoming a self-taught carpenter, electrician and plumber. “Our neighbour, Billy Proctor, came to see me,” said Pierre. “He gave me an Alaskan sawmill. Told me I should attach it to a chainsaw to make lumber. Didn’t know what it was but I borrowed a chainsaw, found some logs and made planks.”

“Pierre has always been a doer,” adds Tove, patting his arm affectionately. “He’s a ‘can-do’ person and figures things out. I’m constantly impressed. He can build anything.

“I don’t know if I should tell you this story,” she continued. “It’s a bit risqué. We were alone in that camp, no washing machine and no running water. So we’d walk around buck naked. Then we were notified timber cruisers were coming in a couple of weeks. Suddenly this little floatplane showed up. Pierre was busy sawing wearing only a hard hat and earmuffs. He picked up a portable gas tank to hide his privates, while I ran to get dressed. Then I cooked lunch for them.”

While maintaining the logging camp, Pierre also rebuilt the shacks into a livable home. They towed it to Sullivan Bay, then Jennis Bay and other marinas, caretaking and improving the places they stayed. Along the way, they became parents to three sons. When the oldest reached school age, they moved back to Gilford Island with its one-room schoolhouse. They settled their float home in a cove and called it Pierre’s Bay. “You could still name places in those days,” said Tove. “We considered ourselves modern pioneers.”

When the school boat operator retired, the 10 or 12 local children who lived at various logging camps needed transport, so Pierre got himself a 28-foot classic Ed Monk boat (“a boat with character,” he said) and became the school boat driver. “I ran them to school and then home each day,” said Pierre. “The government paid seven or eight dollars per day for each kid.”

It was not a wealthy life. “We earned about $14,000 a year,” said Tove. “We could make do. We had a generator, freezer and bought bulk food. I baked a lot of bread. But we had no foreshore lease, no rent, no property tax, no hydro, and no taxes as our income was too low.”

When the sons aged out of primary school, Pierre and Tove decided to buy a house on Gabriola, where the boys could further their education. “It was hard to leave Gilford Island, but Gabriola was still small enough for us to transition,” said Pierre. Tove took a job as a teacher’s assistant, working with kids with learning difficulties. Pierre stayed in Pierre’s Bay, but the boat bus income was too low to sustain the family. He went back to the logging camp in Scott Cove, keeping the place operating—working there two weeks, then spending a week on Gabriola with Tove and their kids. In 1997, he learned he had multiple sclerosis and went on a year of disability. Then, after working for the logging company for 18 years, he was laid off and received only a tiny buyout.

But life on the water was in Pierre’s blood. Once his MS was under control, he went back to Pierre’s Bay and built a marina and lodge. “It was only 40 boats or so, but we packed them in during the summer,” said Pierre. “Then one day, the Des Moines Yacht Club group told me they’d be back the following year and bring a barbecue for a pig roast. True to their word, they custom built and delivered a large barbecue, to ‘put our marina on the map,’ they said.”

The pig roast became a tradition and attracted scores of yachties. Their popularity brought in so many boats that when the new owner of the larger, nearby Echo Bay Marina proposed a partnership, the couple took the offer. Eventually though, contract issues killed the deal. Only later, Pierre and Tove, along with an angel investor, bought the marina. They continued to offer the highly popular pig roast and also added prime rib and fish-and-chips nights.

For the next dozen years, Pierre operated the marina, with Tove’s help in the summer. With added lodging, a laundry, a store and huge meeting space, pleasure craft flocked to this beautiful spot for the sturdy docks, the meals, the store and the camaraderie.

“We spent 40 years on the water’s edge,” said Tove. “It was infinitely fascinating to meet people from all walks of life. Even with the long hours, the people buoyed me up, gave me the energy to carry on.” “Boating is an equalizer,” added Pierre. “No matter the size of the boat, communications were easy, natural, no arrogance. I so enjoyed my time and work at the marinas.”

Since their arrival in Ladysmith in June 2020, Pierre has added to their house—a playroom for the grandkids, a walk-in closet for Tove, another guestroom for family visitors. Retirement is not for him. “I always need a project,” says Pierre, now 68.

Tove is delighted to have a full-time husband. “We were apart for so many years,” she said. “Not a lot of husband-and-wife time. Now I’m finally getting to know my husband. I’m looking forward to the future.”