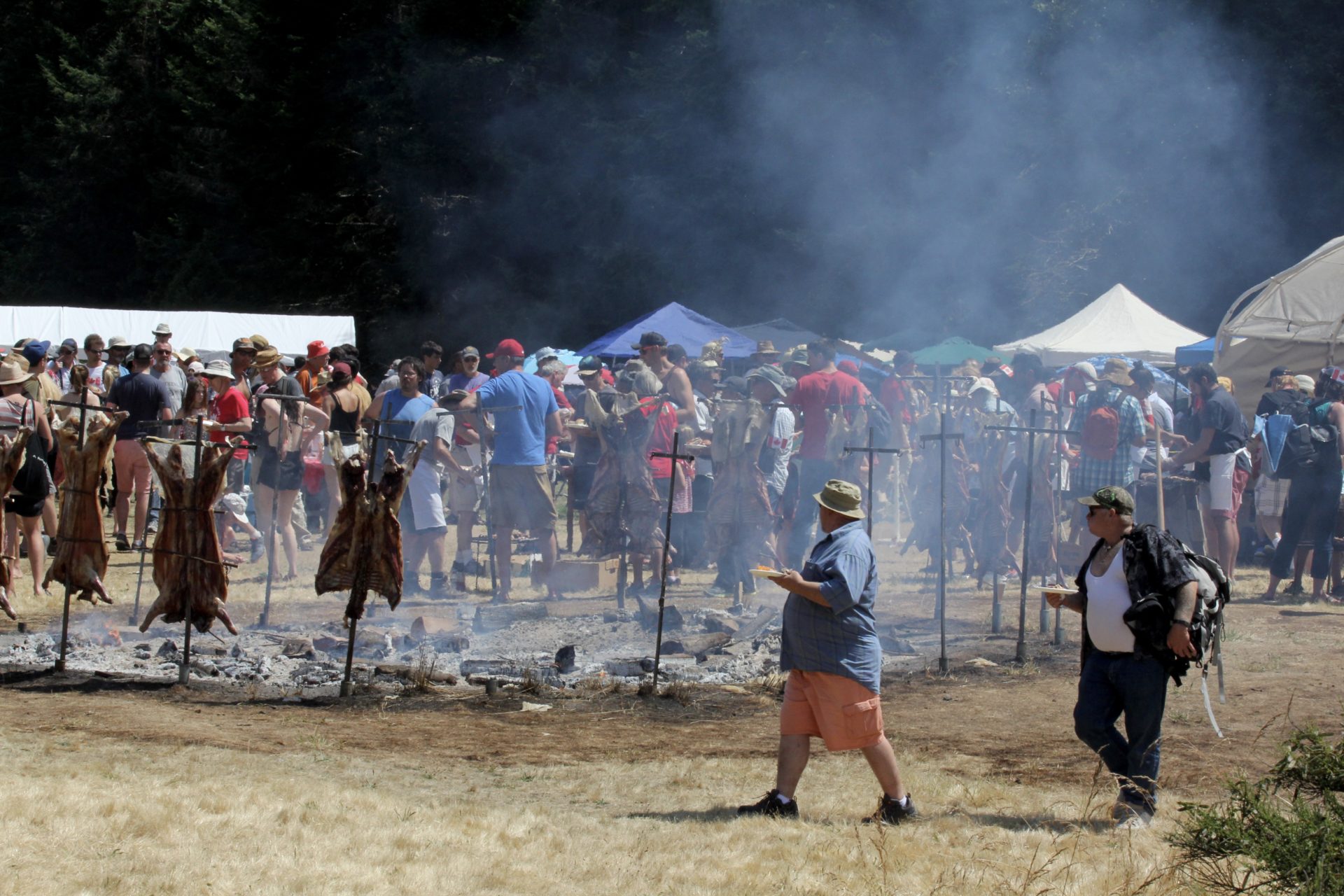 The Saturna Lamb BBQ has been a Gulf Island tradition for 70 years.
Currents

This Canada day tradition is cancelled this year, but you can still support Saturna!

With notes from Mairead Boland

As Canada Day is fast approaching, it’s hard not to think of the events and traditions that we will have to forego in response to COVID-19. One such event that quickly comes to mind is the Saturna Island Lamb BBQ.

This Gulf Island favorite began as a small, community picnic in 1950. The following year, it was decided that the barbecue could be an annual Canada Day celebration; and for 70 more years, the small but industrious community has hosted thousands of visitors for the Canada Day Lamb BBQ.

The family-friendly celebration held at Hunter Field, Winter Cove, hosts games and competitions, venders and artists selling crafts and a well-stocked beer garden, and serves 27 island-raised lamb, roasted around a huge fire, to 1,300 hungry mouths. The island sees up to 2,000 visitors arriving by ferry, seaplane and boat for the occasion. That’s a lot of people for an island that’s home to just 350 permanent residents!

The economic impact this event has on the community is tremendous. For example, in 2019, the barbecue raised at least $51,000 for the Saturna Island community.

Visitors squeeze into the island’s nooks and crannies, filling Bed and Breakfasts, while boats of all shapes and sizes crowd into Winter Cove, where the extended dock is brought from Lyall Harbour in order to accommodate.

For boaters, the short walk to Hunter Field isn’t the only perk; they also benefit from early ticket sales, shuttles to and from boats and a doggy daycare service while boaters enjoy the festivities. Oh, and cinnamon buns delivered right to your deck… It’s no wonder the event is such a hit.

All photos courtesy of Nettie Adams.

Proceeds from the event are used by the Community Club to support a long and diverse list of clubs and organizations on the island, including maintaining the Community Hall and the cemetery, the food bag program, heritage initiatives, Cine Club, Saturna Singers, Tour des Iles, social community meals and the Medical Clinic. The Community Club also provides insurance coverage for senior-care initiatives such as Better At Home and the Meals Program.

Other community organizations such as the Library, the Firefighters, the softball club, the Recreation Centre, and the Parent Advisory Council, as well as local artists and artisans, rely on the BBQ to help sustain their activities—netting $19,000 in 2019.

To offset the economic impact of this year’s cancellation, the barbecue committee has launched the “un-BBQ” campaign (see below), and hopes to reach their goal of $25,000. Funds will then be shared with the community groups based on their percentage of “the take” in 2019.

Note: The Saturna Community Club, which sponsor the Lamb BBQ, is not a registered charity and so cannot issue tax receipts for donations.