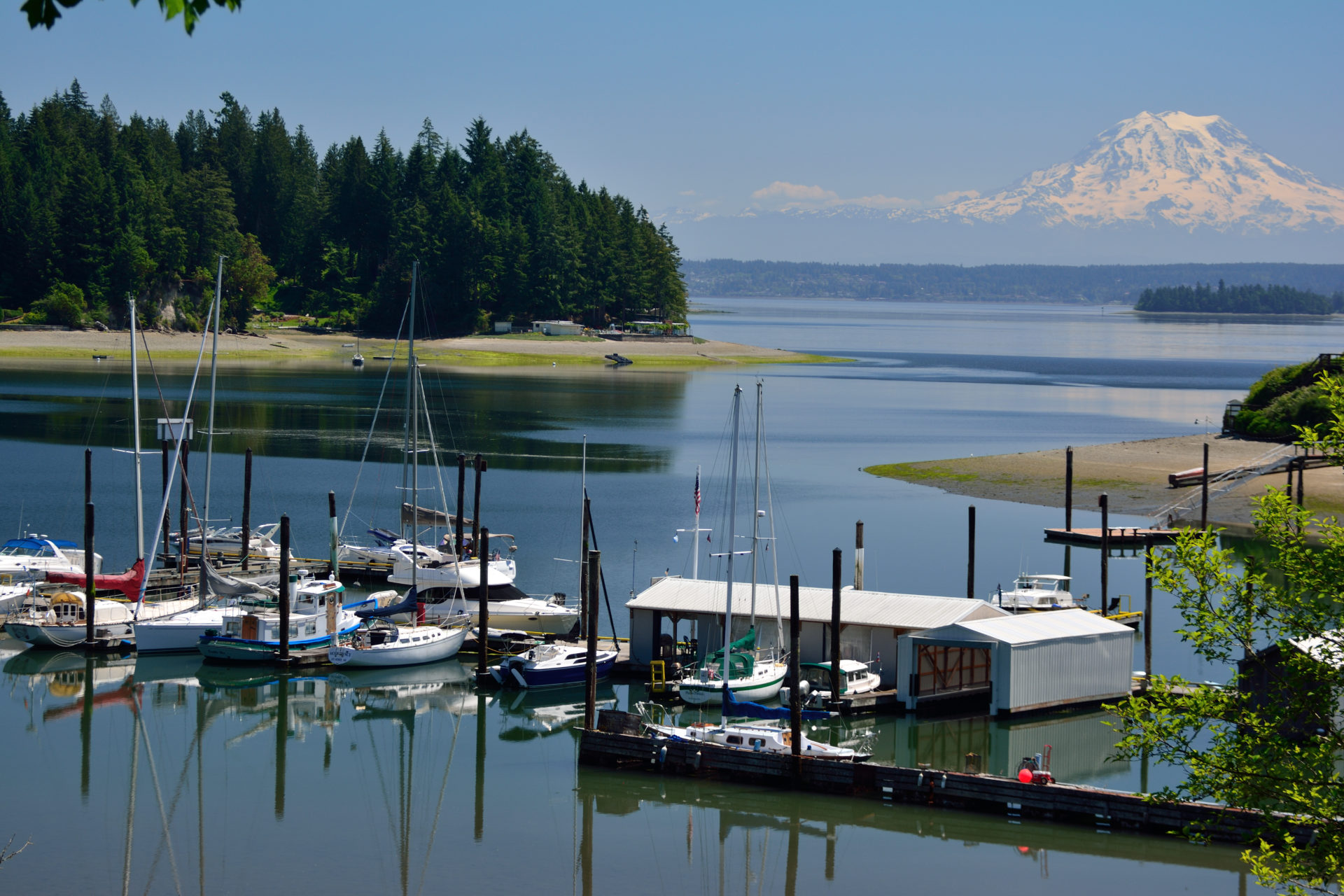 Want to know a really great year-round gunkholing area? Somewhere you don’t have to travel many miles to enjoy?

Well, you may just live nearby. It’s called Puget Sound and it is filled with delightful islands, bays, coves and estuaries. Despite the fact that much of the shoreline is pretty well developed, there are still some great gunkholing opportunities to be found.

In addition to being avid gunkholers, Arlene and I have an interest in learning about the history of the areas we visit. It enhances our cruising adventures, and Puget Sound has no shortage of gunkholes and history. Lieutenant Peter Puget was the first to put the area on the chart when he explored these waters in 1792 at the behest of Captain George Vancouver. Puget and his team departed Bainbridge Island’s eastern shore on May 20, 1792, to examine that branch of the sound leading to the south.

Puget, in a small launch and sailing master Joseph Whidbey in a small cutter, and their crew of 12 men, were about to enter the incredibly beautiful, pristine wilderness that would be called Puget Sound. While they were the first recorded non-Native Americans to explore the area, the Coastal Indians had been plying the waters in their cedar canoes for thousands of years.

In just seven days the explorers painstakingly surveyed and charted the shoreline for the first time in recorded history. In that short week they explored most of southern Puget Sound. It was a remarkable feat considering that there were none of the navigational aids we have today: no charts, no channel markers, no buoys to warn of potential shoals and rocks, or tide and current tables to assist them; nothing to go on except their own innate sense of the sea, wind and weather.

Over the years we have done our share of exploring these same waters, and have developed our list of favourite gunkholes. The enticement that makes us return time after time is the protected waters and the serenity each anchorage offers. They also provide additional attractions should we want to get off Easy Goin’ and do some of our own exploring.

Located on Anderson Island, the southernmost island in Puget Sound, tranquil Oro Bay offers a break from the nearby urban areas. With its surrounding farmland it provides a truly peaceful setting. The island was named for one of the island’s original settlers in 1841 by Navy Lieutenant Charles Wilkes of the United States Exploring Expedition. Today, Anderson Island has a population of about 1,000.

The west branch of the bay is well protected from all weather offering plenty of anchoring in 10 feet of water over a mud bottom. Safe entry to the west branch is made by staying in the centre of the outer bay while approaching the green can and red nun making the entrance to the inner bay, with a second red nun farther inside.

On the southeast shore are two yacht club outstations and the small Oro Bay Marina, which offers 60 feet of guest moorage on a first-come first-serve basis.

Oro Bay is also the resting place of the Ocean City, a 189-foot, 50-car ferry built in 1928. Originally steam-powered, it was built for the Reading Railroad. Re-powered with a 1,600-horsepower Fairbanks-Morse engine, the ferry was acquired by the State of Virginia in 1950. Captain Tom Palmer, an Anderson Island Ferry captain, purchased the ferry in 1984, and hoped it would supplement his current 30-car ferry. He and his brother brought Ocean City from the East Coast to Puget Sound via the Panama Canal. Palmer’s ferry service was taken over by Pierce County, and she was never put into service.

Wollochet Bay is located off Hale Passage and winds a couple miles inland, providing protection from most weather. The shoreline here is lined with homes but good anchorage can be found at the north end of the bay in 20 to 30 feet of water over sand and mud bottom. Tacoma Yacht Club has an outstation near the head of the bay.

A favourite pastime of ours is launching the dinghy and exploring the saltwater marsh and estuary area at the 20-acre Wollochet Bay Estuary Park. The park, located at the head of the bay, has 854 linear feet of shoreline, including the confluence of Artondale Creek.

During the 1930s and ‘40s the head of the bay was home to the Wollochet Bay Oyster Company. Oysters were shucked and packed in wide mouth Mason jars and could be purchased from nearby Gig Harbor Safeway for three cents each and then sold for 20 cents a pint.

Dropping a crab trap in the mouth of the bay, when in season, has provided us with a dungeness crab dinner more than once.

At the southeast end of Colvos Passage is Gig Harbor, with an absolutely delightful seaside village surrounding the small harbour. The entrance to this very well protected harbour is narrow and shallow with a small lighthouse on the spit on the eastern side marking the entrance. The preferred passage is slightly to port of centre as you enter. But the best advice is to keep an eye on the depthsounder as this can be dicey at low tide on a busy summer weekend with all sizes of large and small craft entering and leaving at the same time. Inside, the harbour opens up and good anchoring in 20 to 35 feet of water over a sticky bottom can be found throughout, with the exception of the very northern portion.

During a heavy storm in 1840, Lieutenant Charles Wilkes brought the captain’s gig, a small boat, into the harbour for protection. Later in the publication of the Wilkes 1841 Map of the Oregon Territory, he named the sheltered bay Gig Harbor.

Once the anchor is down and secure, the village has plenty to offer visiting boaters, including restaurants, gift and specialty shops, bookstores and the Harbor History Museum. One of our favourite stops when we visit is for pizza or halibut fish and chips and cold ale on the deck at the Tides Tavern, a harbour icon.

If you need to stretch your legs or work off a Tides Tavern meal, there’s the Finholm View Climb, a set of stairs at the head of the harbour leading to an observation area with a view of the harbour and Mount Rainier.

Filucy Bay, located in the southeastern end of the Key Peninsula, is a beautiful and protected anchorage in South Puget Sound. Much of the tree-lined shoreline is private property. The nearby village of Longbranch has little more than a few homes. The soothing calls of loons can often be heard over the still waters. On clear days, Mount Rainier’s profile fills the bay’s entrance making for a great view.

In 1934 Filucy Bay was linked by ferry service with Steilacoom, Anderson and McNeil islands. The ferry service is still in operation but no longer connects to Filucy Bay.

Anchorage is good in 15 to 35 feet of water over a thick mud bottom throughout the bay. The northern arm is often preferred for its peaceful surroundings. The Longbranch Improvement Club owns and operates a small marina on the south side of the bay, which offers 537 feet of guest moorage, and a dinghy dock. We enjoy stretching our sea legs as we walk the area’s rural roads.

The most important thing to do in Filucy Bay is simply relax. In fact, that’s about all there is to do. And there’s nothing wrong with that.

This lovely bay indents the southeast shoreline of Bainbridge Island about 0.7 miles. Blakely Rock stands guard off the harbour entrance with its white four-second light flashing the rock’s presence to mariners. Blakely Harbor is a residential harbour with homes and the largest undeveloped waterfront area on the island.

There is good depth throughout the middle of the harbour. Good holding can be had at the head of the harbour in 20 to 30 feet of water over a sand and mud bottom. The head of the bay is protected from most winds. The south shore shoals so watch your swing.

In 1841, Lieutenant Wilkes named the quiet harbour in remembrance of Captain Johnson Blakely, USN; he and his ship were lost at sea during the war of 1812.

The view from inside the harbour is spectacular. Across the blue waters of Puget Sound the Seattle downtown waterfront and its skyline rises above Elliott Bay. The skyline glows at sunset with the reflection of the setting sun on the buildings and at night the lights of Seattle appear to twinkle. We enjoy Blakely Harbor’s contented ambiance, possibly because it’s so quiet and peaceful.

If you like to dinghy ashore and explore, you’ll love Blakely Harbor. The entire head of the harbour, 40 acres, is a park. Explore the beaches, tide pools and the remains of the turn of the century Port Blakely Mill. The mill was once the world’s largest lumber mill. Relics of the huge old mill, remnants of old wharves, stub pilings and the remains of a millpond dam can be found in the park. Trails fan out through the park. It’s a delightful place.

Port Madison is a one-mile-long inlet at the north end of Bainbridge Island, making a pleasant and protected spot to set the hook. The inlet was named after U.S. President James Madison and his wife, noted pastry chef Dolly Madison. The shoreline is a blend of conifers and sprawling waterfront homes. Although the majority of the waterfront is all privately owned, many of the estates are as much fun to ogle as is the natural scenery. Good anchorage may be found just inside the entrance in a bight on the southeast side, and the head of the bay where it widens into what is locally known as Hidden Cove.

The only place to go ashore is the 6.1-acre Hidden Cove Park, maintained by the Bainbridge Island Parks District. A 100-foot-long float provides easy shore access. There are two picnic tables, a .25-mile trail and access to a two-mile multipurpose trail network.

Puget Sound offers many good and interesting anchorages for those who don’t have the time or desire to venture too far from home or for those looking for a fresh destination this summer. Next time, before you head out on the water, pull out the charts and plot a course to explore some of Puget Sound’s many small, well-protected bays and harbours.