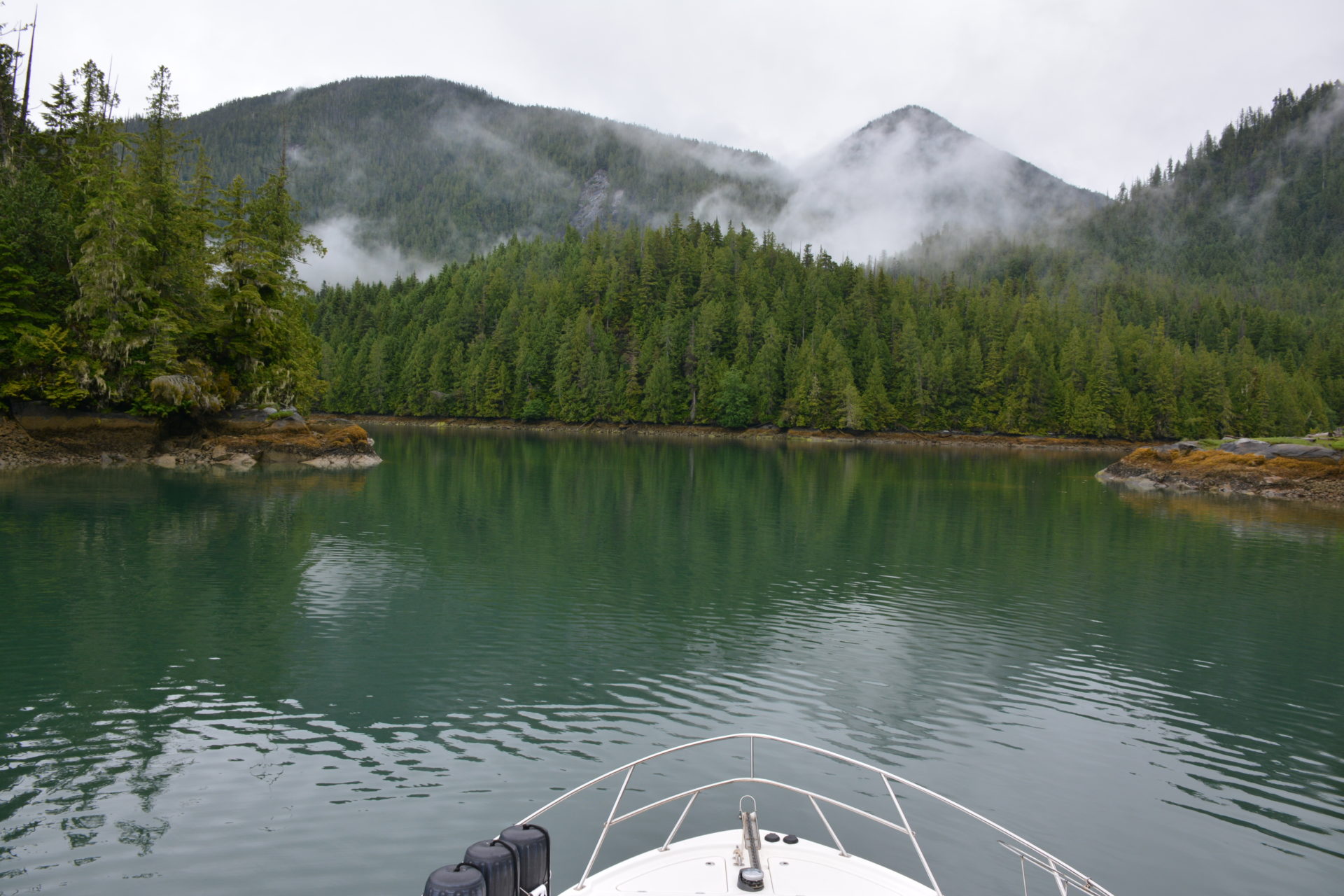 Taking refuge from wind and rain never felt so relaxing

Oh boy, did it rain hard overnight and continued through the morning. As we made our way to Moore Bay, located at the entrance of Kingcome Inlet. There were several new waterfalls on the surrounding hillsides as a result of the previous night’s rain. Even in inclement weather the Broughtons are beautiful.

Moore Bay is a large deep-water bay that offers a few anchoring possibilities. One small anchorage lies on the northern side of arrowhead-shaped Gregory Island located behind a narrow peninsula, which provides decent shelter from west winds. The head of the cove is shoals and the foreshore is low and uninviting for some. The view north up Kingcome Inlet and the snowcapped mountain range is heavenly. A few years ago, we spent a wonderful night anchored here.

A second anchorage lies on the west side of the bay, between Gregory and Thief islands, which provides shelter from westerlies and a superb view of the entrance of Kingcome Inlet. The final location, which we were headed for, lies east of the easternmost island at the head of Moore Bay, and provides shelter from easterlies.

When approaching Moore Bay, skippers need to be aware of three major rocks protecting the entrance. An unnamed rock lies on the northeast side of Gregory Island, Thief Rock sits in the middle of the mouth of the bay and another unnamed rock is on the north side of the bay which is nearly submerged at high water.

When we arrived, the cove on the east side of the small island had a log boom stretched across it at the 35-foot depth line and the bottom dropped-off quickly to the west. We decided to move southeast of the island and drop the hook in a depth of 40 feet and the anchor bit right away and held with one engine in reverse. Once again Easy Goin’ was all alone. The sound of cascading water could be heard coming from the forest and the view across the bay and Kingcome Inlet was spectacular.

We launched the dinghy and set a crab trap in the eastern cove, near the log boom, in hopes of an artichoke and crab dip appetizer.

Later in the afternoon we took the dinghy to the forest service recreational site, located on the northeast shoreline of Moore Bay, to get a little exercise and stretch our sea legs. There is a dinghy dock, four campsites with picnic tables and fire pits, a pit toilet, creek and culturally modified trees—bark stripped for use by First Nations people. There wasn’t much in the way of trails to hike.

On the way back to Easy Goin’ we checked the trap and it had a keeper Dungeness that was going back with us. The trap was returned to the bottom in hopes of more of the delicious crustaceans.

It started to rain so we deferred our dinghy trip through the pass between Gregory Island and the mainland. The pass leads to Shawl Bay and is used frequently by small craft. The chart indicates a minimum depth of 2.1 feet.

Dinner began with the aforementioned appetizer, followed by Arlene’s famous crabby noodles made with the catch of the day. During dinner the wind picked-up and was predicted to increase overnight to northwest 15 to 20. Being exposed, we moved Easy Goin’ southwest of Thief Island into the lee of Gregory Island and reset the hook in the crux of the island in 35 feet.

The following day was Canada Day. This is the first time that we have not celebrated Canada Day at Pierre’s with many other boaters in all our visits to the Broughtons.

With the wind moving the trees high on the island and the morning weather report of wind increasing to northwest 20 to 25, we decided to stay for another day in our, “Millpond-like” gunkhole. The excellent shelter made for a relaxing day playing Yahtzee, reading and napping. With the sky clearing, we were provided a spectacular view of Thomas Bluff, Mount Plumridge, and Mount Hawes.

To cap off the day, dinner was a warm bowl of jambalaya loaded with shrimp we caught a couple days before. And if that wasn’t enough, before sunset it began to rain, and we were treated to a magnificent double rainbow—a fitting ending to a perfect day all by ourselves on the hook.

In the morning the sky was clear with a light wind, the decision was made the move. Before departing, a humpback whale rose out in Kingcome Inlet with an exuberant tail slap creating a fountain of seawater, sparkling in the sunshine.