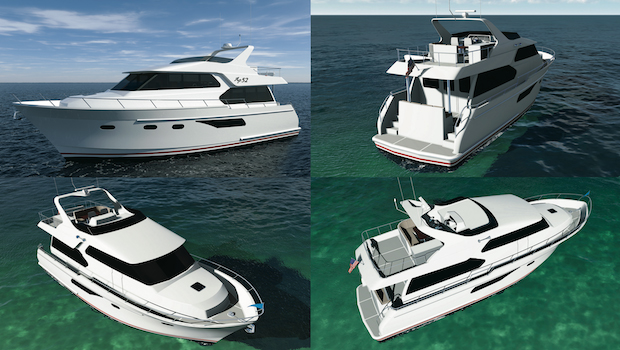 Apollonian Yachts is a new manufacturer specializing in boats designed and built from the ground up around the needs of the North American market. Their yachts are designed by renowned naval architect Howard Apollonio and feature a very special construction with some serious benefits.

Two years in the making, hull 5201 is the first to arrive. It’s a 52’ raised pilothouse with three staterooms, three heads, and a huge 16.5’ beam. The singular lower deck part encompasses the transom, outer stairwell, cockpit, salon floor, stairwell from salon to pilothouse, and the pilothouse itself. Deck and hull are crafted using a special vacuum-bagged and infused fiberglass and vinyl ester resin construction. This method minimizes deck and hull weight by 35% while also increasing strength and decreasing cost. Hull 5201 will arrive with 430 hp Cummins, offering a cruise in the low 20s knots range, but 660 hp Cummins options are coming, making for mid-30s cruising speeds.

Observing a lack of affordable new pilothouse boats, the Apollonian team saw an opportunity to bring a 3 stateroom boat with true raised pilothouse (with day head) to the market. The design is a home run, fast and efficient, with an up galley and spacious layout often found in much larger boats.

A Washington native and fixture of Seattle yachting for 40 years, project leader Vic Parcells started boating before he could walk.

A 2nd generation boat salesman, Vic learned from his father starting at 17. Vic has also managed a variety of yachts and been a fishing guide and skipper along the West Coast, making several trips up and down the Pacific from Canada to Cabo. As a trusted salesman (and currently partner at Seattle’s Crow’s Nest Yachts), Vic has also had the pleasure to deliver yachts all over the world, including trips
to the Caribbean via the Panama Canal.

Hull 5201 will be arriving at the Crow’s Nest Yachts dock on Seattle’s south Lake Union at the first of the year.