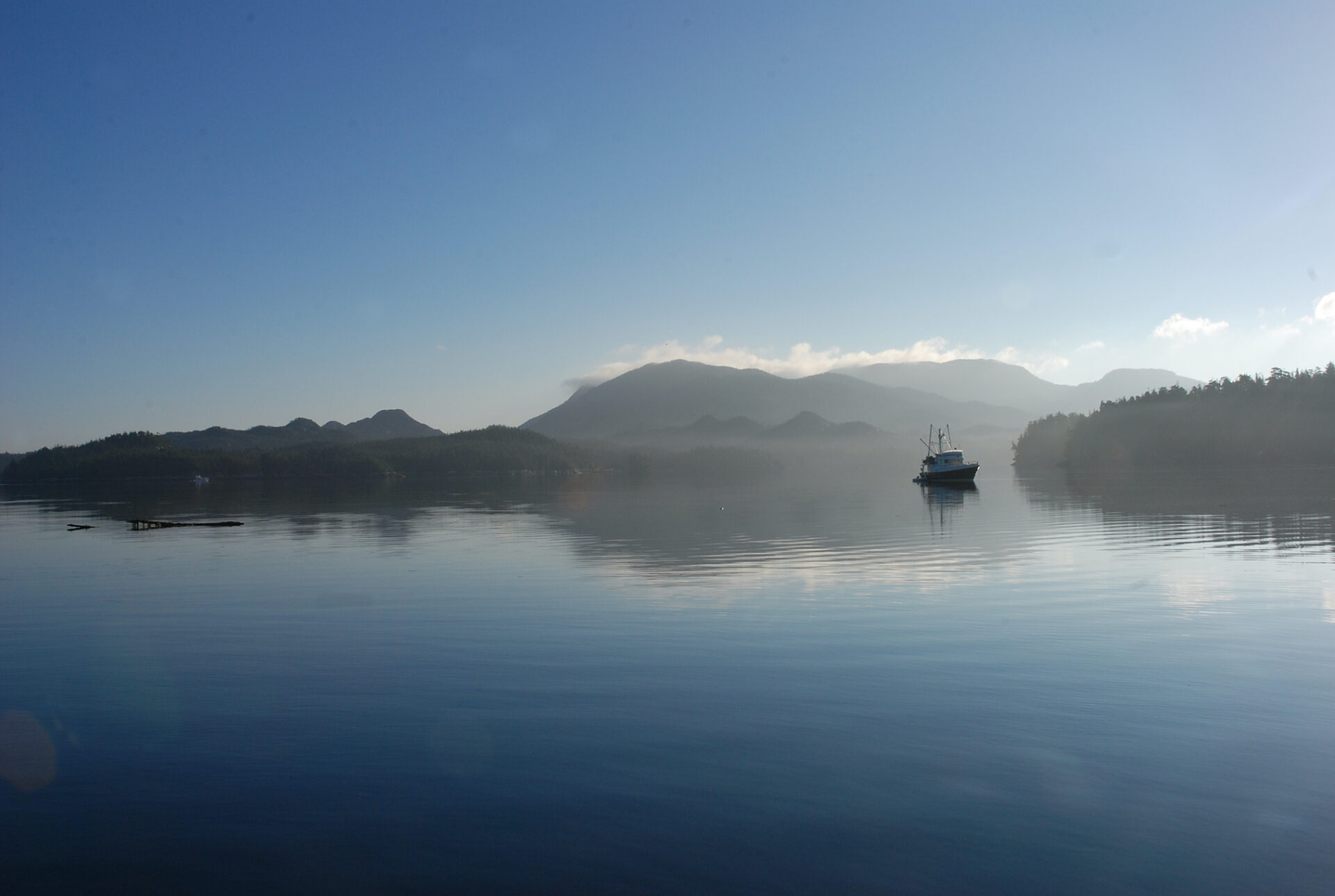 Once destined for development, this pristine piece of land on BC’s Central Coast is now protected under the Hakai Luxvbalis Conservancy and is a great destination for the ambitious boater

To return to the wild is a universal urge. Between wildlife, beautiful scenery and the stillness of remote anchorages, our West Coast shores can sooth any restless soul. After cruising this coast for over 30 years, the most soothing spot in our experience is the untrammelled wilderness found north of Cape Caution along the shores of Calvert Island.

The northern half of Calvert Island lies within Hakai Luxvbalis Conservancy, which is British Columbia’s largest marine protected area. This majestic swath of coastal wilderness also encompasses most of Hunter Island, and dozens of smaller islands and islets bordering Hakai Passage and Queens Sound. When first established in 1987 as Hakai Recreation Area, few people could have predicted the decades-long drama that would unfold on the shores of Pruth Bay, which is the conservancy’s centrepiece anchorage. Even fewer could have foreseen the surprise ending to what seemed an irreversible tale of paradise lost.

26 Years Ago  The first time we pulled into Pruth Bay on Calvert Island the year was 1990 and we were southbound in Fitz Hugh Sound, heading home to Vancouver after a summer spent cruising Haida Gwaii and Southeast Alaska. We had seen many wondrous sights—from the verdant rainforests and hidden waterfalls of Gwaii Haanas National Park to the sparkling tidewater glaciers of Alaska. So when we stopped for the night at Pruth Bay, we figured the best of the trip was behind us. How wrong we were.

It being mid-September, ours was the only boat anchored in the bay as we headed ashore to hike across a neck of land to the beach on the other side. We had heard about this spectacular white-sand beach from some boating friends and it was easy to locate the trail they had described. 10 minutes later we emerged from the forest and stepped onto a sweep of beach as breathtaking as Vancouver Island’s Long Beach but untouched by human presence.

We drank in the sight of ocean waves rolling ashore and of sandpipers skirting the edge of the surf as they flitted across the glistening sand.

Our reverie ended abruptly when we saw a man jogging at the far end of the beach. Where the heck had he come from, we wondered. He turned out to be the park warden and he kindly invited us to stop by his cabin back at the anchorage. There we sat on the deck overlooking Pruth Bay while the warden filled us in on the status of this new park. He recommended we hike the trail to North Beach, which we did the next day. He also assured us the wolves living on the island were as timid as the deer, but we saw neither. We did, however, see some Pacific white-sided dolphins feeding that evening at the mouth of Pruth Bay. 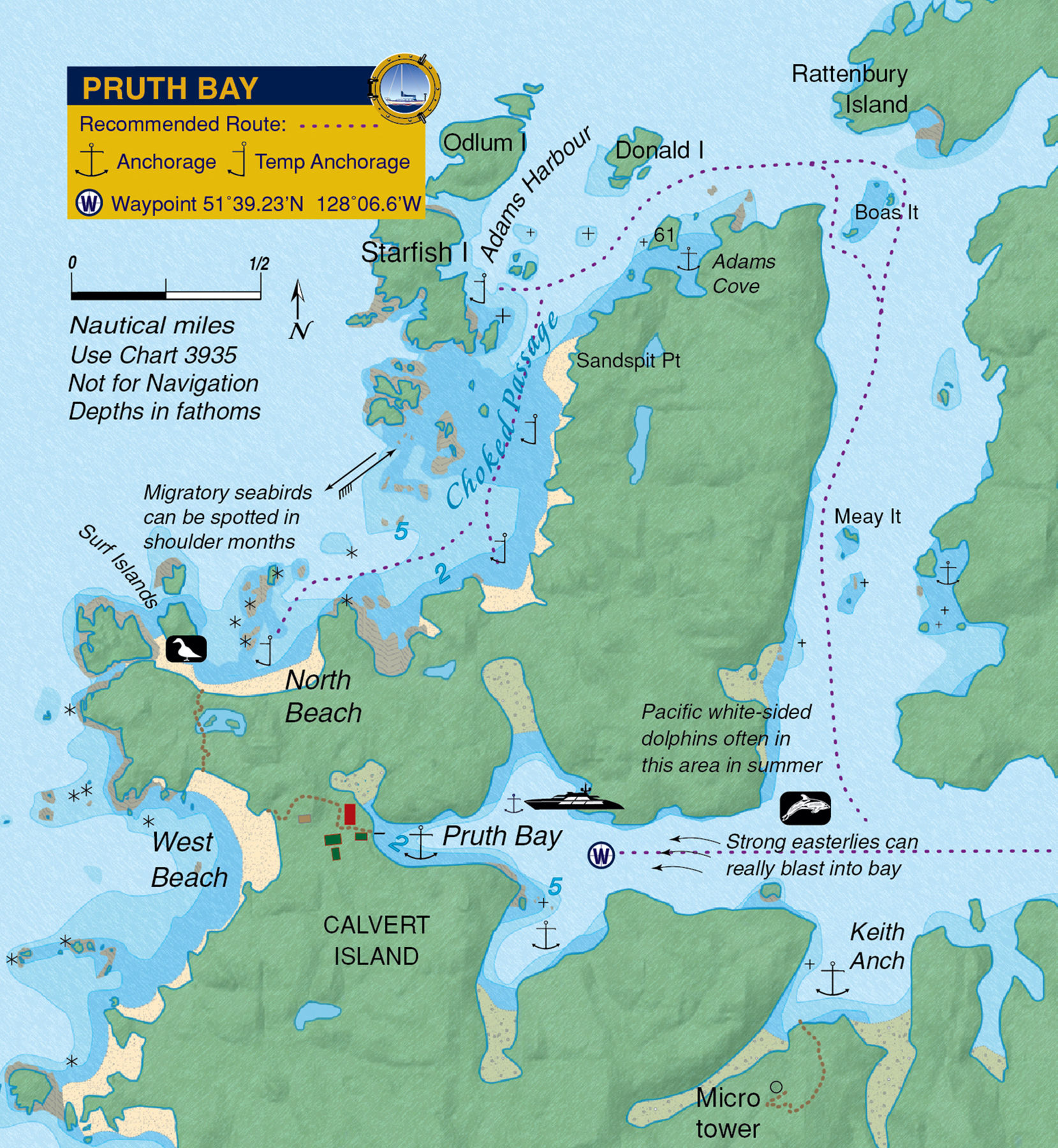 A Battle for the Land  What we didn’t realize at the time was that although nearly all of Calvert Island had long been Crown Land, the panabode cabin occupied by the park warden was on private property being leased by BC Parks. This 87-hectare parcel of land lying between the head of Pruth Bay and West Beach had passed into private hands in 1925. The owner, a Vancouver lawyer, rarely visited and access to this remote property was unrestricted. The Heiltsuk First Nation, whose people once populated the shores of Pruth Bay, built a small cabin here for Dr. George Darby who practiced at the hospital in Bella Bella. Other visitors also used this cabin, including fish boat crews and pleasure boaters en route to Alaska.

The property changed hands several times before it was eventually bought by John Brazier of Seattle, who owned a forestry company operating sawmills and lumberyards. Brazier built another, larger cabin, which housed a caretaker and was used as a fishing retreat for the owner’s business associates. When BC Parks attempted to purchase Brazier’s property upon establishment of Hakai Recreation Area, the two parties couldn’t agree on a selling price and in 1992 Brazier sold his land to a Vancouver management company. A sportfishing lodge was hurriedly constructed, despite protests by the Heiltsuk people of Bella Bella who were trying to protect the site of their ancestral winter village. Boaters also joined the protests, writing dozens of angry letters to various government departments.

An uneasy truce descended on Pruth Bay, with boaters allowed access to the lodge property and the trail to West Beach. But tensions intensified when the property was sold in 2003 to a development company that ran the lodge as an exclusive gated resort. Salvation came in 2009 when the property was purchased by the Quadra Island-based Tula Foundation. This non-profit family foundation was formed by Eric Peterson and his wife, Christina Munck. A research biologist, Peterson made a fortune selling his medical imaging company and is now one of B.C.’s most generous philanthropists. Upon acquiring the Pruth Bay property, the Tula Foundation established the Hakai Beach Institute and transformed the luxury lodge into an interdisciplinary research station for scientists conducting fieldwork in biology, geology and archaeology. While researchers study the island’s bog forests and sand dune ecosystems, boaters are once again welcome and access to the ocean beaches has never been better.

The approach to Pruth Bay is via five-mile-long Kwakshua Channel, which cuts between Calvert Island and the smaller Hecate Island. Winds funnel up and down this channel, leaving the main part of Pruth Bay exposed to strong easterlies. However, the holding ground of thick mud and sand is good, and we’ve seen more than a dozen boats hold firm in 30-knot gusts. The south arm provides better protection in southeast winds.

Overlooking the head of Pruth Bay is the Hakai Beach Institute property. In summer, its buildings are used for housing up to 100 scientists and university students, whose meals are served in the main lodge. The panabode cabin once used by BC Parks wardens has been moved to the other side of the dock and is now the Institute’s headquarters. Nearby is a tree mask, carved years ago by a former caretaker.

There are no services or facilities for visiting boaters, such as moorage, fuel, water or supplies. The floats are used by delivery vessels and seaplanes, and boaters are asked to anchor well away from the docks.  However, the rear fingers are kept free for dinghies, and boaters are welcome to come ashore here to access the trails to West Beach and North Beach.

Once There  It’s an easy hike from Pruth Bay to West Beach along a well-marked and maintained trail. The beach is beautiful—a long crescent of soft sand and surf pounding onto distant reefs. Smooth rock formations overlook part of West Beach and form an appealing backdrop for a picnic lunch with the beach spread before you.

The hike to North Beach is longer and a bit more strenuous, but the trail is now well maintained with a sturdy boardwalk bridge straddling a wetland filled with native water lilies (a felled log with a rope handrail used to serve as a footbridge). In 2010, BC Parks, Hakai Beach Institute and Nuxalk Guardians began upgrading the existing trail system and for three summers park rangers and volunteers worked at building boardwalks and stairs.

Keith Anchorage is a good alternative to Pruth Bay in settled weather, its main attraction being access to a trail leading to the summit of a small mountain atop which is a telecommunications tower overlooking Kwakshua Channel. We anchor in the west arm in 45 to 50 feet of water; the holding is only fair in loose mud and rock. The trailhead is located on the east side of the anchorage, where a felled log serves as a landing place for dinghies at high water. The trail is rough but well trodden, and it takes 30 minutes at a brisk pace to reach the radio tower where a platform provides an eagle’s eye view of Kwakshua Channel and distant islands.

Adams Harbour, at the north end of Calvert Island, provides temporary anchorage in settled weather in the lee of Starfish Island. Or, you can motor to the bottom of Choked Passage, anchor in two fathoms, and enjoy a beautiful beach right off your stern for the afternoon.

Anne Vipond and William Kelly are the authors of the bestselling guidebook Best Anchorages of the Inside Passage.