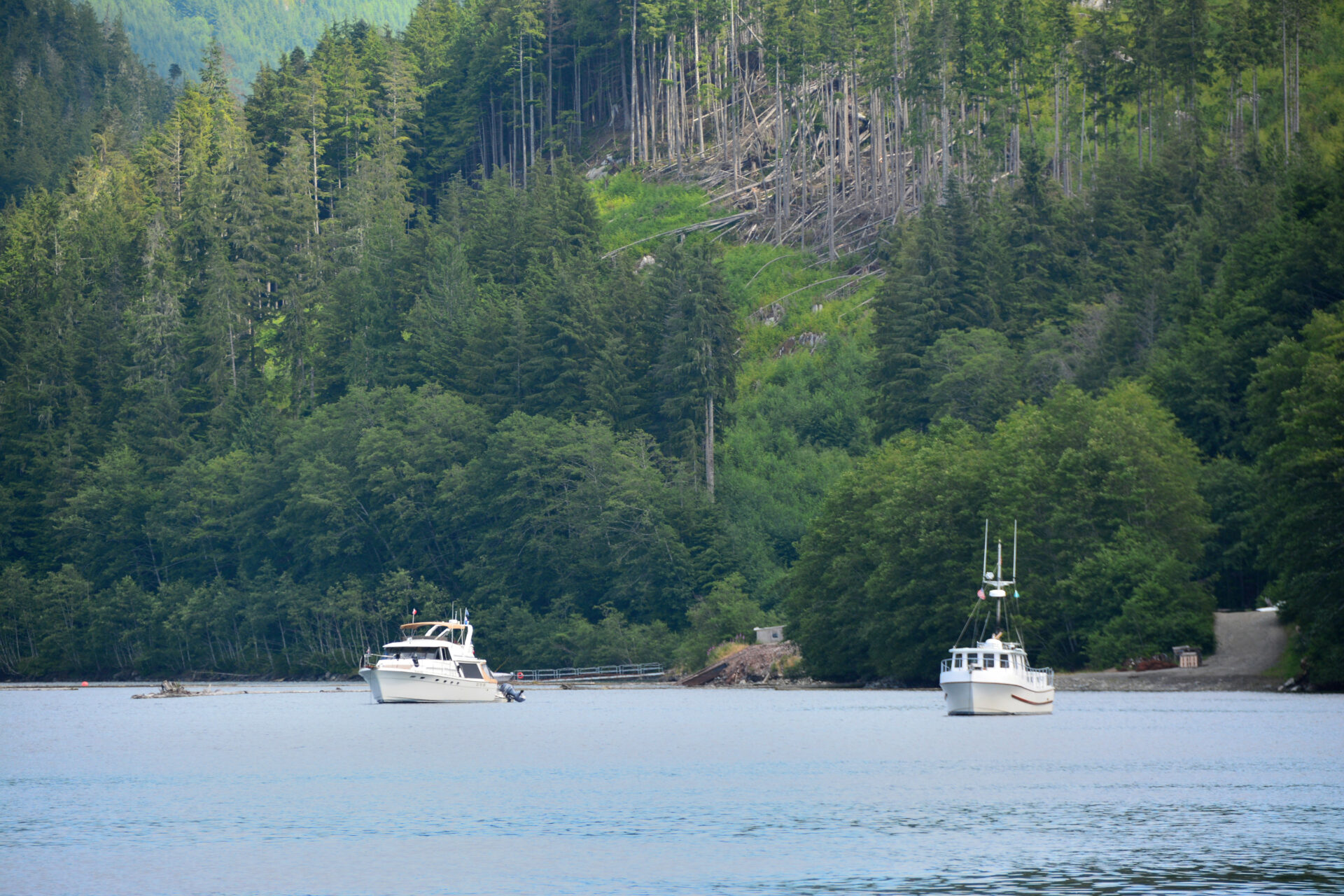 A great gunkhole in any weather

It was a typical Broughton morning with a low marine layer as we exited Cramer Passage and guided Easy Goin’ southeast through the narrow and shallow, 500-metre-long channel leading into Shoal Harbour on Gilford Island. Our arrival coincided with a low tide and we maintained a heightened sense of awareness. Navigating into the harbour for the first time can be a little nerve-racking. At the narrowest point the channel is 40 metres wide. According to local legend and historian Billy Proctor, the shoaling starboard shoreline is the site of an Indigenous clam garden. We kept an eye on the chart plotter and depth sounder and at the halfway point we held close to the port side to pass through the deepest portion (12.5 feet) so not to disturb any clams with our props.

Once safely through the entrance, it opened into a shallow, 1.25-mile-long harbour surrounded by low-lying second-growth forested hills. The harbour provides good protection from summer afternoon westerlies. But it’s named Shoal Harbour for a reason, many parts of the anchorage are shoaled. 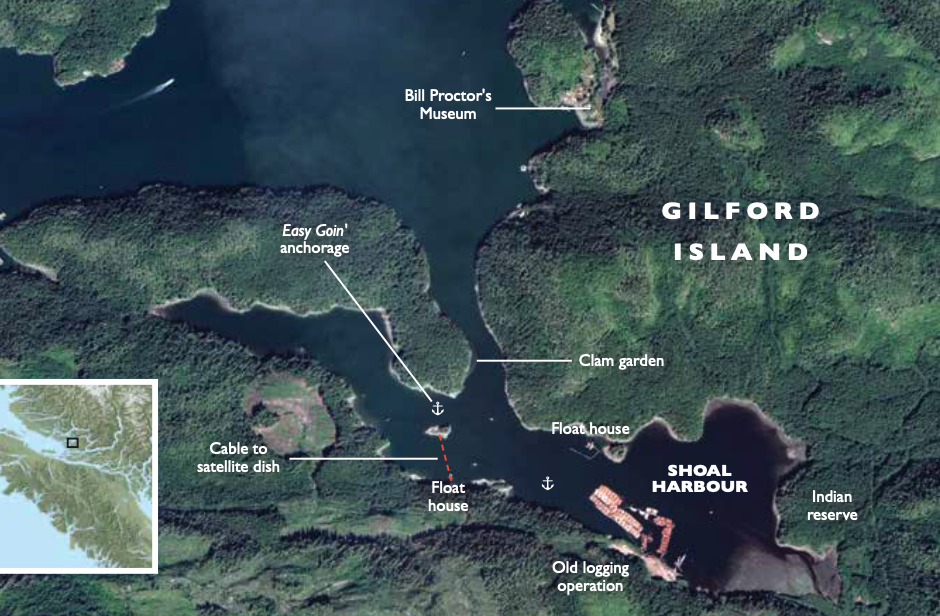 As we roamed though the harbour evaluating potential spots to anchor, Arlene spotted a black bear on the beach rolling over rocks and eating crustaceans. I moved Easy Goin’ in close for some pictures. When we were within 150 feet of him, he raised his head to look at us and then continued to roll rocks. Our presence didn’t seem to bother him.

Once the photo session was complete the hook was set north of the small, unnamed island in the northern finger of the harbour in 12.5 feet of water over a sticky mud bottom with good holding. We were the only boat anchored in the bay. We found our little one-boat hideaway lovely and well protected.

The south side of the island appeared to be a good anchorage but there was a float house attached to Gilford Island and a satellite dish on the unnamed island. We figured they would not be appreciative of a view of Easy Goin’, or of us potentially snagging the cable running across the harbour floor to the antenna.

After lunch, we launched the dinghy to do some exploring. The western arm is quiet but too shallow for us to anchor. There are a couple float houses, as well as a few derelict ones being reclaimed by Mother Nature in the southern portion of the harbour. We thought aloud between ourselves how much work it would be to live on one.

At the east end of the harbour is the former location of the Indigenous village of Apsigiyu. The village site was a clam and salmon harvesting location and later a timber-harvesting site utilized by the Kwiksootainuk and the Mamalilikulla.. The area is now designated as a First Nation Reserve.

On the southern shoreline is what was once the site of a logging operation. The camp has been dismantled, but the road system starts here, providing many miles of hiking trails. Beware if you do venture out—there is a healthy population of bears and cougars on the island.

Later that afternoon we were joined by a few other boats at anchor in the harbour. They were all positioned a quarter mile southeast of us, in about 25 feet of water—the deepest part of the bay.

Although we didn’t make the trip this time, harbour visitors can make the half-mile dinghy run northeast from the entrance to Billy Proctor’s Museum. The museum is filled with a collection of coastal artefacts that he has collected during his lifetime, and is curated by Billy himself.

In late afternoon we watched dinghies from the boats anchored in the harbour, loaded with fishing gear, head back out into Cramer passage to pursue salmon. We had heard a couple days earlier that the coho fishing was pretty good, as the coho migrate through the area from mid-July through September. The harbour can also provide good crabbing at times.

Oh, what a lovely night of sleep; calm, quiet and secure. I got up in the middle of the night to assess our situation as I most always do when swinging on the hook for the night, regardless of the anchorage. A thin fog had drifted over the harbour and the only thing that could be seen was the anchor lights on the other boats a quarter-mile away, and a light on in the float house on the opposite shore.

By morning the fog had dissipated but there was still a marine layer in place. As the aroma of freshly brewed coffee filled the saloon, we made plans for the day: Enjoy a leisurely breakfast, lift the anchor and go exploring in hopes of discovering another hidey-hole.