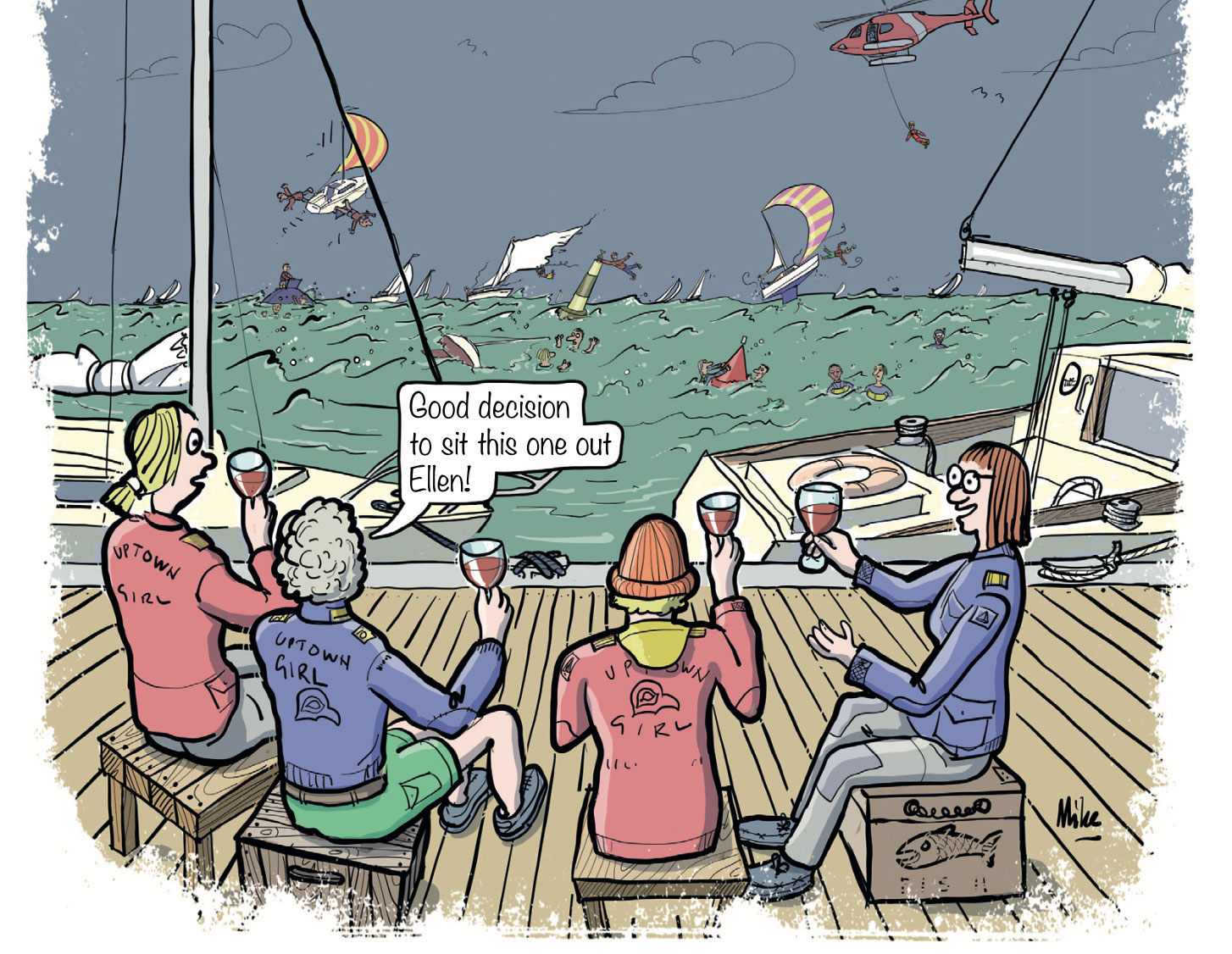 The Best Race I Never Sailed

In the early 2000s I had the pleasure of sailing with three other women out of the Nanaimo Yacht Club. Skipper Ellen, the most experienced sailor, had bought herself a fibreglass Thunderbird called Uptown Girl. In those days “T-Birds” were the sailboat of choice for regular folks without big pocketbooks. They were great fun to sail in one-design races, and the fleet was competitive and highly social.

We sailed Uptown Girl in the club races but were never much of a threat. When Ellen signed us up for the “Race Around the Rocks” regatta we just hoped we’d have a good time and not disgrace ourselves too much. I suspect this attitude was a bit hard on Ellen, who is a confident and competitive sailor. But she had no illusions about her fun-loving crew and enjoyed the camaraderie as much as the rest of us.

The regatta was at the Schooner Cove Resort. The old hotel was a somewhat faded rose, but it had a good pub and marina. Racing conditions were excellent on Saturday, and we had a great day. To no one’s surprise Uptown Girl ended up in the back of the pack. But there was a good party and we thoroughly enjoyed ourselves.

On Sunday morning the weather was a lot livelier than we were! By the time we got to the staging area for the start line, the wind was gusting a good 25 knots or more. It was hard work just keeping out of everyone’s way. We managed to do no harm, but I could see Ellen, working hard on the helm, was obviously worried. I could also see the others were anxious too. With sails under so much pressure we had to struggle just to keep clear of the other boats. I already knew I was in way over my head and I was dreading the upcoming start and manoeuvres around the marks.

“Do you think we can do this?” I gasped, out of breath from a particularly tough tack dodging an oncoming C&C that loomed as large as a Mack truck. “I’m starting to get really scared.” That was all Ellen needed. We made a quick pass by the committee boat to resign and turned toward Nanaimo to collect our vehicles.

Blessedly the wind coming behind us felt calm and steady. We set the sails to wing-on-wing and relaxed gratefully in the cockpit with a collective sigh of relief—it felt like we’d made the right decision. It was a beautiful sail home. We slipped smoothly through the water, even able to enjoy a coffee en route.

With the boat secured, it was time to head back to Schooner Cove where the fleet was still busy beating itself up. We sipped glasses of white wine on the pub patio and watched the boats limp in. Soon weary and bedraggled sailors began to straggle up the gangway. They stopped to stare blearily at us—four rather smug gals with lipstick intact, combed hair and fresh clothes sitting comfortably with our beverages in the late afternoon sun.

The motley bunch plopped themselves down, ordered drinks and started the inevitable storytelling. There were lots of near misses, minor injuries and some damaged gear. But the day had been exciting, and they survived to tell their tales. I enjoyed hearing the adventures, but I wasn’t envious. I’m glad my friends hadn’t needed to prove anything to themselves or anyone else. I’d had a lovely day on the water, and the best race of that regatta was the one I never sailed.