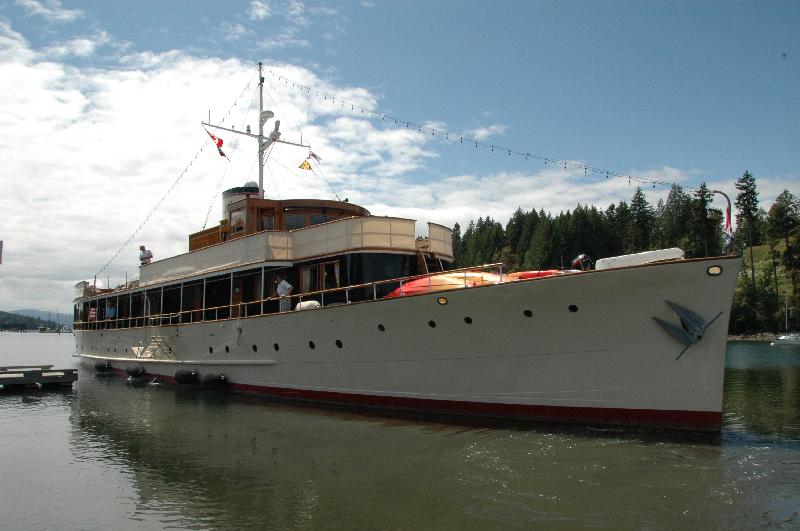 The Mystery of the Acania

It is common for classic yachts of bygone eras to be associated with famous individuals. There is the Taconite that was built by the Boeings and the Fifer that belonged to former B.C. Lieutenant Governor Colonel Wallace. In California and throughout the United States numerous pre-Second World War classic vessels were registered to famous people, including movie stars, politicians and wealthy businessmen. Some, inevitably, were associated with infamous or notorious owners. Such a yacht, it seems, is the Acania.

This year, a 137-foot steel hulled yacht, Acania, was berthed in Telegraph Harbour on Thetis Island—at the marina’s outer dock on more than one occasion. When we came across it there in June, the vessel had been piloted into the harbour through its narrow, shallow channel by skilled captain Rick Etsell, assisted by crew Tim and Nancy Wistrom. It drew much attention from visiting boaters and local islanders and it was soon speculated to have been the one-time property of Al Capone, legendary Chicago bootlegger and gangster. The rumour is said to be supported in part by the unusual early ownership records of the vessel.

The official records, however, show that Acania was designed by John Wells and built in New York in 1930 at Consolidated Shipbuilding for a Wall Street banker, Arthur E. Wheeler. Fitted out as a high-end luxury motor yacht representative of the golden age known as the Roaring Twenties, its accommodations included four staterooms, a sitting room, sun decks, a formal dining room with supporting galleys, a hideaway bar, which was a necessity for the prohibition era, and commodious crew quarters.

A number of rumours surround the Acania. For starters it is believed there was another, almost identical vessel, also named Acania, that was said to have belonged to Capone and used as a decoy so that the FBI would be fooled into chasing down the wrong carrier of illicit booze while the rum-runner made its getaway.

We were curious about Acania’s dubious past and were gratified when we were invited aboard for a tour of the old lady.

The tour took us throughout the yacht and we spent about two hours admiring her layout, restored woodwork, magnificent wheelhouse, spiral stairs in a spacious companionway, and looking into its secret bar located behind a large wooden wall panel that swung away at the touch of a concealed latch. Throughout the ship there were many hidden and disguised lockers, including a special champagne storage area. Below decks an unusual coating on a water tank with its seemingly extraneous piping masquerading as tank vents and fill pipes led us to believe it was used for storing rum—not water.

The magnificent yacht was restored over a five-year period between 2008 and 2013. It has had extensive structural repairs to its steel hull, decks and interior, with copious amounts of woodwork restored or replaced. New twin 600 horsepower Caterpillar diesels were installed along with a variety of modern systems that replaced the old diesel power and equipment. A mezzanine in the engine room overlooks the new power plants and accessories. A touch of the classic era remains in the form of a large electric switching panel, kept as a memento rather than a functional unit.

The owner, David Olson of San Francisco, California, made a point of keeping the vessel as original as possible by retaining the traditional telegraph and other historic bronze controls, although these too are not functional and are backed up now by new technology.

The interior of the ship is a veritable museum. Antique furnishings, carpeting and floors add a classic dimension to the restored Acania. David Olson has gone to great lengths to acquire period furnishings to restore this classic to its original status representing luxury yachts of the 1920s and 1930s.

We left the vessel wondering about its dubious past. Had Capone really owned it at one time? Had he used the documented original owners as a ruse to fool the authorities?

I think the photograph that was standing on one of the tables in the lounge, of Al Capone smiling as though he knew the answer, said it all.